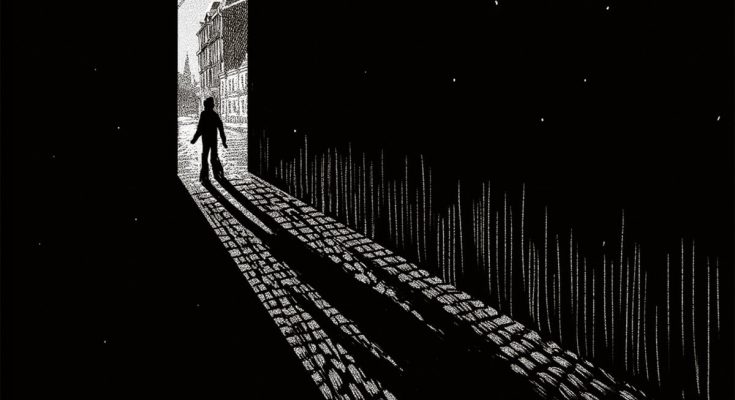 The Ukrainian black metal scene holds considerable quality from exceptional bands that came to existence in the mid 90’s. Bands such as Nokturnal Mortum, Hate Forest and Drudkh were the first bands who have established the black metal movement in eastern Europe. The Ukrainian scene is a mine of gifted black metal bands with excellent qualities. The Ukrainian outfit presents to us their 11th album and Drudkh appears to show interest in expanding their wide discography with worthy output. Ever since their formation in 2003 Drudkh has been renowned with creating dark atmospheric black metal. Stylistically their experimentation has always been orbiting around melancholic spectra, by weaving the melodic elements into their music. Їм часто сниться капіж (They Often See Dreams About The Spring) doesn’t differ much from the previous album A Farrow Cut Short.

Yet both albums have a monochromatic wave of sullenness, Drudkh mastermind Roman Saenko whose main influence comes from poetry, has patterned the previous albums, so that they all become parallel with each other. The opening track Nakryta Neba Burym Dakhom… (Covered by the sky with a brown roof), begins with a peculiar grimness. Thurious growls are aggressive and the melancholic tremolo picked guitars are layered with the traditional black metal style. The emotional flow is beautifully crafted into these five new tracks. The snare drum sound is very appealing to Drudkh‘s style and often plays a dominating role with the other instruments.

Drudkh’s musical direction has been mused by the Nordic black metal style. And one of the bands which have had a big influence to their style is Burzum. In their past albums they often present a lot of folk elements into their music. Their mysterious status is variously ambiguous when it comes to spreading information to publicity, and in spite of this reason they ridiculously became very famed in the black metal scene. Drudkh is far from being commercial, they don’t need frills to make their music catchy, their fine musical composition comes directly from the heart. Perfecting their melodies with a sense of ambient sound, Drudkh shows respectful adherence to their Slavonic roots, therefore they demonstrate their folk influences which comes directly from legendary Ukrainian poets.

Drudkh’s interpretation of Nordic black metal music has surpassed itself with vast creativity. It is the magic of nature and poetry which has enkindled their hearts with passion, therefore they bring so much value to their music. The second track U Dakhiv Irzhavim Kolossyu…… (in roof’s rusty colossus) is conjured by grandiose blackened atmosphere. Where the tremolo guitars recreate slow bleak passages, the drums superbly counterpoint the melancholic aura. The bass and the rhythmic melodies of the guitars are combined beautifully. The production is crystal clear, each instrument is audible including the bass.

Vechirniy Smerk Okutuye Kimnaty…… (evening tumultuous room) is rawer compared to the previous ones, the drums are highly technical here, the high pitched growls are manifested superbly. Along with the mid paced riffs the sound results in a very classy Drudkh style, by reaching near the end one can easily give his verdict upon the new album. Which in my humble opinion sounds very powerful and emotional, the tracks are having more upbeat tempo from the previous album. Za Zoreyu Scho Striloyu Syaye… (for the dawn that shines by the arrow) is genuinely imbued with atmospheric black metal. Drudkh’s vast experience in creating melancholic songs is measured by musical literacy. Final track Bilyavyi Den’ Vtomyvsya I Prytykh… (the day was tired and bleached) is a fast haunted track added with majestic keys. The swift blast beats interact with the fast tremolo riffs, combined with the dark textured themes that shapes the flow of this album so gracefully. The correlation between mysticism and spiritualism is deeply engraved in Drudkh’s musical creation, all this makes Їм часто сниться капіж (They Often See Dreams About The Spring) a spellbinding album!