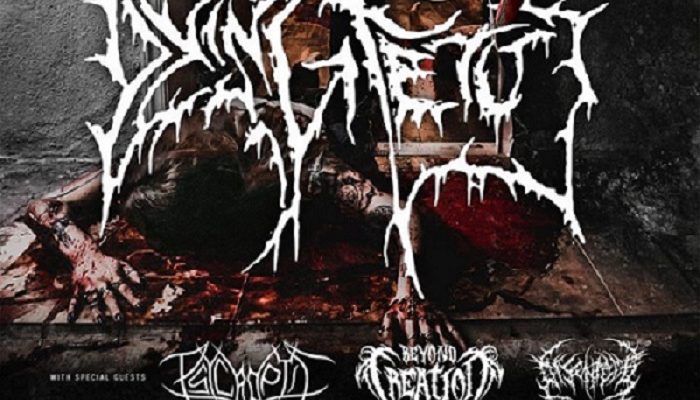 The death metal legends from Dying Fetus are currently on tour to promote their newest album: Wrong One to Fuck With. On the 8th of November they destroyed JC De Klinker in Aarschot together with Disentomb, Beyond Creation and Psycroptic.

Disentomb (***) kicked off the evening with some brutal death metal ‘comme il faut’. Most of the audience came early for these friendly Aussies, which they were very thankful for. The charismatic frontman managed to get all of the audience’s attention -even mine, and I was stressing out like crazy for the interview with Dying Fetus- and the band played a very tight and enthralling set. Disentomb is definitely a worthy support band for a band like Dying Fetus. Next up was Beyond Creation (***). This band has a pretty big fanbase too and JC De Klinker was almost fully stuffed already. The Canadians have a very unique appearance and sound. All guitarists perform with headless guitars, and their music is pretty progressive, yet melodic. As the tension for the headliner was increasing, Psycroptic (**) -also from down under- played their hardcore-infused death metal set with a hint of slam.

Time for the band everyone came for. Dying Fetus (****) doesn’t need any introduction. The trio came on stage, and after they were done tuning, the sound dimmed, the legendary quote “It’s not my fault I’m pregnant and I love drugs. Who cares? Fuck the baby, let it die.” filled the room and the audience knew what was to come. The band started off their set by playing From Womb to Waste and JC De Klinker nearly exploded. They continued the show by playing the first track of the newest album: Fixated on Devastation, followed up by their classic Grotesque Impalement. The unbeatable drumming skills by Trey Williams stole the show once again, especially during this song. Other classics like One Shot, One Kill; Your Treachery Will Die With You and In the Trenches passed too. Guitarist John Gallagher told the audience he wanted to see more stagediving, so the audience did what it was told. People -young and old, sober and wasted- crawled on stage and jumped onto the crowd. The bassist and guitarist both seemed pretty amused with the audience going this crazy. To top off the crazy show, the band played Praise the Lord (Opium of the Masses) and with that, the audience was satisfied.

The guitarists thanked the sweaty and bruised crowd and threw some picks. The amazingly friendly drummer Trey immediately came into the crowd to thank the people personally, sign some CD’s -and the setlist I caught!-, and take some pictures. They only played 4 songs from the new album they’re touring for, but no one seemed to bother. On the contrary! After a month of touring, Dying Fetus still has the same spirit to play. What a great night for death metal lovers! The line-up was well varied, and I had the feeling that the audience had a little bit of each subgenre of death metal in one evening.