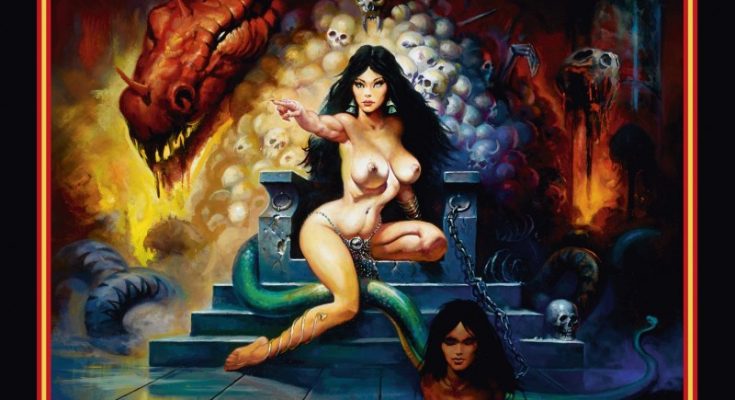 Epic heavy metal stalwart Eternal Champion makes a triumphant return on their second full-length album ‘Ravening Iron‘, set to be released through No Remorse Records on November 20th. Eternal Champion brings a traditional style of heavy metal by integrating the classic qualities of this sub-genre. The lyrical concept of the band is deeply imbued in the fantasy realm of Michael Moorcock. Their astonishing debut album ‘The Armor of Ire‘ portrayed the very ethos of heavy metal. More than three decades ago American heavy metal bands such as Manowar, Manilla Road and Cirith Ungol laid down the epic and fantasy trademarks of this genre. The first thing that would strike you about the sophomore release is the anthemic and the melodic vocal delivery of Jason Tarpey. ‘Ravening Iron‘ proves that the band has been honing their craft.

Eternal Champion takes the songwriting to a new level. The songs are sharp and technically complex. The riffs are eminent, heavy and inspired by the 80s epic heavy metal. Compared to the debut the newest album brings a refining scale. The guitars are fully charged with storming gallops and mystical melodies to create an epic atmosphere. ‘Ravening Iron‘ is more than an embodiment of 80s heavy metal. The band has conveyed surreal art that draws life from the ancient mythologies of magic and dragons. The opening track ‘A Face in the Glare‘ is one mighty and majestic, crushing track, stemmed by imposing riffs and heavy drum beats leading to captivating lead guitar lines.

Eternal Champion focuses on epic melodies. Therefore, the songs here are full of adventures. There are many distinguishable elements that prevail on the sophomore. The use of the majestic choruses and soaring synths in the background certify the intelligence of the songwriting. With highly epic and potent riffs the following track ‘Ravening Iron‘ presents a mesmerizing alchemy. The mid-paced orientation of the songs unfolds an air of mysticism. The band shows a remarkable measure to evoke the true ethos of heavy metal. Guitarist John Powers injects powerful rhythms and the swirling atmospherics echo with the heavy percussion. The guitars blast out in uncompromising force where the music generally emphasizes gritty riffs.

‘Ravening Iron‘ is a timeless classic. The songs feature razor-sharp guitars forged in the ancient style of heavy metal. While carrying on with the same electrifying pace the third track ‘Skullseeker’ is one of the album’s strongest tracks, delivered in a massive range of crushing riffs and soaring vocals. Thankfully, the lead guitars and solos are professionally executed. There’s also a great interplay between the guitars and bass guitar. As the double bass kicks in, the array of galloping riffs begin to swirl in a dramatic way. Effectively, each track displays many captivating and dark moments. Eternal Champion‘s latest album emphasizes versatility as well.  A track like ‘War at the Edge of The End’ is pure and straightforward and steps into the warm and uplifting melodies, hence bringing many unexpected surprises.

The album takes many influences from 70s rock bands. For example , the guitars on ‘Coward’s Keep‘ channel the early style of Rainbow. The driving bass lines of Brad Raub vibrate powerfully with the riffs besides the violent guitar tone. ‘Ravening Iron” has all the elements to make the album truly epic. The fierce amplifying guitars unleash one riff after another, setting up complex guitar lines full of chugs whilst the vocals steal the show with an anthemic style of vocals. ‘Worms of The Earth‘ is typically more aggressive and creates such a triumphant tone. The drums are the driving force of the songs where Arthur Rizk showcases his gallantry behind the drum kit. While it never occurred to me that the band would implement some synth samples to create a mystical reverie, surprisingly ‘The Goldblade‘ veers towards an 80s industrial style and imbues atmospheric synth work.

The awe-inspiring riffs on the album closer ‘Banners of Arhai‘ focus on the grand and ominous tone. This heavy, mid paced track emphasizes whirring solos that create an epic and dramatic feel while the vocals elevate the song to extraordinary feats that bring Ronnie James Dio to mind. ‘Ravening Iron‘ is simply a masterpiece, inspired by the classic heavy and doom metal albums of the early eighties. Eternal Champion’s new album is a triumphant return to the fantasy realms of magic and dragons. A saga of power and might structured on a heavy-doom laden atmosphere.  Recommended for fans of Manilla Road, Cirith Ungol, and Visigoth.