With everything going on in this crazy world and all of the uncertainty surrounding us all I am thankful to have music. Even more so, I am thankful that Danny Wimmer Presents was able to pull off Inkcarceration and make it an environment that we all felt safe enough to go and rock out hearts out to, while forgetting about the outside world for a couple of days. Although not everyone was happy about the protocols put into place, there’s no denying that the feeling of being around everyone was so overwhelming, and seeing LIVE music for the first time in almost 2 years was absolutely refreshing! 3 days of music was just what we needed.

Over the course of the 3 days there were approximately 60 bands, these are times where I wish I could clone myself. Unfortunately cloning isn’t a ‘thing’ yet (in my world), so I chose to pick a few bands from every day of the festival as highlights from the weekend!

New Years Day (****) – First off, seeing Ash Costello up on stage with her band was so good! I love the genuine energy she shares with the crowd, and the fact that when talking about this being their first show back, Ash started to cry. If that doesn’t show passion for what they’re doing, I don’t know what does; especially seeing the supportive relationship that her and Nikki Misery have for one another as she walked over to him for a hug during an emotional moment in the show. One of my favorite parts of New Years Day‘s set was when Ash Costello had everyone throw their horns up for a ritual to please the metal gods, also know as Pantera, before things got “F*cking Hostile”.

Ice Nine Kills (*****) – Whew, Ice Nine Kills is everything a horror lover would want! From American Psycho to Chucky and nearly everything in between they cover the bases. Not to mention the fact that while on stage, Spencer Charnas does multiple costume changes to go along with the song. Starting off with a clear rain coat from the scene in American Psycho while performing their song “Hip To Be Scared”. Along with Spencer‘s costume changes, they’ve got someone who comes out on stage wearing multiple other costumes; from Georgie’s raincoat, the costume from the exorcist and even Jason Voorhees’ mother. If you know, you know! My personal favorite song of theirs that they performed was “Stabbing In The Dark” themed after my very favorite movie, Halloween.

Bad Omens (*****) – When first hearing them on SXM Octane I really liked their music. I hadn’t thought about seeing them in concert, but figured since I was at Inkcarceration, and they were performing, might as well. I’m so glad I did! These guys are so good live; their sound is amazing, their energy is contagious and they just rock. Noah Sebastian had the crowd jumping and moshing almost the whole time! I’m so glad to have been able to see these guys, especially when they were performing their song “Limits” and Noah Sebastian was belting out the line “If you’re throwing me to the lions, you should know I’m not scared of dying. I wouldn’t take back one thing I did, one thing I said but I’m gonna make you wish you did.” Something about the way his voice sounds just brings me joy when listening to their music.

Pop Evil (****) – Talk about giving it their ALL! Not only was the music great, but at one point Leigh Kakaty was crowd walking! Which I didn’t even know was a thing, and it was epic! It was definitely memorable in all the right ways. Listening to their music and seeing them perform on stage are two separate sides of Pop Evil and it brings a fun surprise for you to see them performing in all of their glory! It was also great to see Haley Kramer doing her thing on the drums and absolutely loving it! Alongside Leigh Kakaty, was Zero 9:36 and Blake Allison (Devour the Day) for Pop Evil‘s song “Trenches”. That was a fun add-on and it made it more fun and entertaining than it already was!

A Day To Remember (*****) – When thinking back to the show, one of the first words that comes to mind is “Goosebumps!”. These guys were hilarious, too. At one point in the show, Jeremy McKinnon (vocals) said the crowd should have someone stand on a crowd surfer and finished with, “I should also preface this with you absolutely should probably not do what I just said, I want to put that out there”. After that, people started to do it. The band also threw a bunch of toilet paper rolls into the audience for them to throw around (poor clean up crew!). Two of my absolute favorite moments from their set was when they were playing “If It Means A Lot To You” and the whole crowd sang “Now everybody’s singing – La, la, la, la, la, la, la” THIS is what gave me major goosebumps, it was such a feeling to be in the crowd during this time. There’s nothing quite like it! My other favorite part was when they played their song “Resentment”. Who am I kidding, there are too many moments to mention!

Fever 333 (****) – Man, when I heard these guys were crazy, I never would have guessed just how freaking crazy they were! Every member of the group absolutely rocked the stage and was a blast to watch. At first, when Jason Aalon Butler climbed the stage frame, I was like “okay, this is entertaining“, but, then he was running all over the stage and throwing himself on the floor. While Aric Improta was jumping around behind the drums, and Stephen Harrison was rocking out doing his own wild thing. Oh, it gets better; Jason ends up losing his pants and socks, runs down the center aisle that separates the audience in front of the stage, and climbs up to the roof of the audio booth and starts performing from up there. It. Was. WILD!

Motionless In White (*****) – I wish these guys had been later in the day with a full stage set up, lights and all. Don’t get me wrong, seeing their show was like a dream come true for me; I had been wanting to see them for a long time, and FINALLY it was able to happen! Chris Motionless sounds amazing live. The grain in his voice is there, and you can just see how he is in his element up on stage! Justin Morrow‘s stage paint is even more fun to see in person, as opposed to seeing it on social media. I cannot express just how exciting it was to see these guys, and the way they interact with the audience. At one point Chris thanked fans for supporting them, and all bands throughout the pandemic especially when they have their own families and bills to pay. Which, again, it’s nice to feel appreciation from the people that we follow and look up to. If I HAD to choose what my favorite part of the show was, it would have to be when they performed “Eternally Yours” or “Another Life” Honestly, I love all of their music!

Overall Inkcarceration was PACKED with amazing acts and other forms of entertainment. The weekend of festivities was exactly what we, in the rock/metal community, needed. I cannot wait until next year! Thank you once again to Danny Wimmer Presents for making this happen and making it safe. Rock on!

Credits to all pictures to Inkcarceration and their photographers. 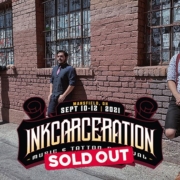 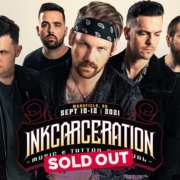