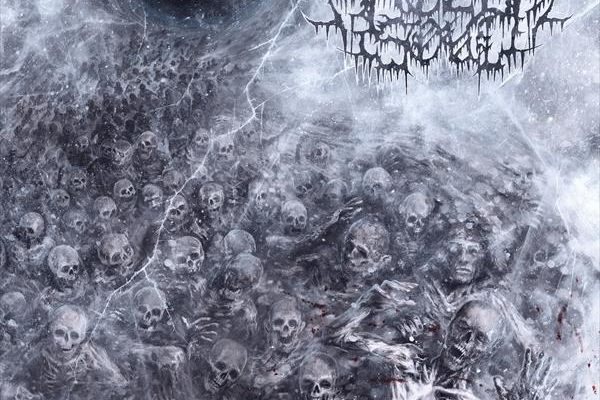 Hailing from Fort Worth, Texas, Frozen Soul is a death metal band formed in 2018 by Chad Green (vocals), Michael Munday (guitars), Samantha Mobley (bass guitar), Matt Dennard (drums), and Chris Bonner (guitars). Later in 2019, the band released its first demo “Encased in Ice” which was followed by two split albums and the single “Tormented by Time” in 2020. “Crypt of Ice” is the band’s first full-length, released through Century Media Records. Frozen Soul verges clearly on the old school approach by uncovering their devotion to the likes of Asphyx, Obituary, and specifically Bolt Thrower. With these potent influences to the 90’s raw death metal, the U.S. quintet shows a professional embodiment of a style that is rarely presented by death metal bands nowadays.

The debut includes ten massive tracks that are heavily focused on colossal riffs and grinding grooves measured by robust performance and energetic style aptly portrayed. Although the band doesn’t present anything new in the field of extreme metal, Frozen Soul‘s latest material sounds fresh, the songs on the debut move through a heavy and crushing tempo. The ambient intro of the opening track “Crypt of Ice” is a brief ominous introduction before the rampage of the dual guitars provides crushing riffs. The slow titanic drum pace is followed by methodical grooves that will make you bang your head. With this solid principle, Frozen Soul emphasizes the unmatched qualities in writing fierce death metal riffs.

“Arctic Stranglehold” can be regarded as vital and dynamic, the track morphs from mid pacing to the effects of the striking double bass. The song is boosted by locomotive aggression and with this fine quality and unhinged tempos, they show a sense of extremity. While the approach here is less varied, the band truly captures the classic groove-laden riffs. This pure attribute and the characteristic quality of the Texan steamrollers is brought by formidable riffs and abrupt transitions. “Crypt of Ice” is ultimately powered by constant chugs and intense tremolo pickings. Chad Green’s vocals consists of deep growls whilst his creepy howling send cold shivers down your spine. The perfect combination of the abrasive riffing and the cold melodic lead fragments proves that the core of the songwriting is based on musical cohesiveness.

The constant bludgeoning of the drums never ceases to rest, where a song such as “Hand of Vengeance” evokes the dark and crushing moments from Bolt Thrower’s album “War Master”. Their scathing riffs and heavy drum blows create a fiery tempo in the following track “Wraith of Death”. To the hammering tunes of the guitars on “Merciless” the music gears into up-tempo yet the breakdowns will have you charged by the inhuman growls.

Bassist Samantha Mobley reminds me of Jo Bench (Bolt Thrower) where the buzzing tone of her bass guitar emits powerful discharges throughout the album. Frozen Soul gradually transforms their songs into fierce tempo but the band reveals some other influences from doom metal as well. The melodies are sparse but they add depth to the music and that’s when the band begins to flirt with elements of doom metal. Ridden with the old school mindset the band also delivers some blast beats and ferocity in a massive track such as “Encased in Ice”. This song, which was previously released on the band’s demo album, also features many slow moments. The only criticism is the lack of musical variation where the album is full of heavy chunks as a pure Bolt Thrower worship. “Beat to Dust” shines with violent fury through ferocious drums like the other tracks.

The ambient intros in some of the tracks like “Twist the Knife” works well but what really matters here is the quality of the riffs and they’re plenty. “Faceless Enemy” is crunchy and raw and contains some killer tremolos. The band takes another sledgehammer entry on the final track “Gravedigger” which contains whirring tremolos and pounding drums. Suffice to say that “Crypt of Ice” is such a gritty album that pays homage to legends such as Bolt Thrower, this is highly recommended.