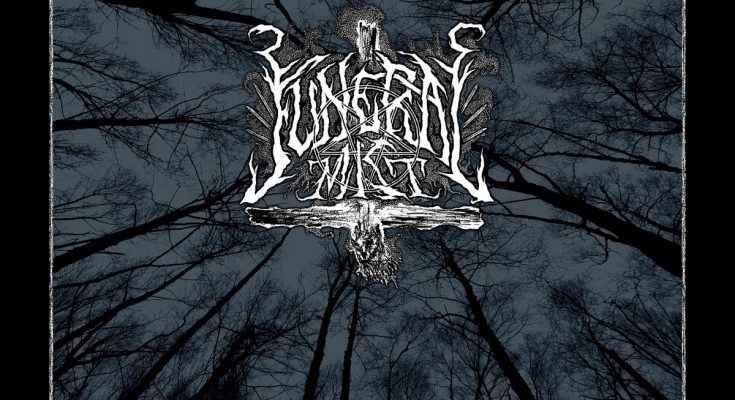 Funeral Mist was forged in 1993 by Arioch who’s the brain behind this orthodox black metal band. Arioch a.k.a Mortuus, the vocalist of the Swedish black metal group Marduk, who also took part in another project with the name Triumphator with the ex-drummer of Marduk Fredrik Anderson and released one studio album in 1999. The third studio album Hekatomb is now released through Norma Evangelium Diaboli which is an underground music label based in France. Yet after nine years Arioch delivers his unholy opus, it’s no coincidence that the band’s latest album is released one week before the new Marduk album. On the third musical record the band uncovers its mysterious and multifaceted sonic experience of traditional Swedish black metal. The quality of the production and the instruments are very clear in the mix especially the bass which sounds very audible. Apart from the process of production, the lyrics deal with subjects of Satanism and Misanthropy. Hekatomb comes with eight tracks and can be described as a profane and twisted form of raw black metal. Musically the band has improved on its previous work as the new album is taken into a hellish level of accomplishment.

In Nomine Domini acts as a disoriented opening to the album. The vocal abilities don’t need any further statement since fans of Marduk are quite aware of Arioch’s skills, though in similar style to the mentioned band, Funeral Mist pushes towards newer and seemingly unlimited boundaries. The raw energy manifests itself with the sudden eruption of blast beats while the guitar sounds raw and sharp. The drums are being handled by Lars B and he does a great job in hammering the drums with unrestrained power. Naught but Death is forged with the fury of black metal, and features ritualistic prayer which is added as segments to the song layers. With the generation of newer black metal bands like Valkyrja, Ondskapt, and Ofermod, Funeral Mist has become widely known for its unorthodox methods which are reflected in the lyrics. All eight tracks are orchestrated with sophisticated guitar based riff, thus creating a dense and sharp tonal, that is fundamentally measured with the standards of black metal.

Shedding Skin uncovers the insanity of the uncompromising brutality, the effectiveness of the sharp riffs is what makes this album so interesting and likewise the bass guitar which follows with active buzzing. It is very clear how the vocals steal most of the fleeting moments of this record, a record that reeks of a demonic black plague. Arioch uses irresistible and compelling vocal cord techniques from spoken words to shrieking, reminding me of the most renowned orthodox French black metal band Deathspell Omega, and that’s the thin line which separates Funeral Mist from most of the traditional black metal bands, as lately on this album they strongly became the trademarks of the band. Apart from these mentioned trademarks, Funeral Mist has established unparalleled originality without any reference to the black metal groups. The tracks are formulated and have their own identity which are far from being labelled as black metal clichés. Cockatrice is one of the highlights featuring ambient segments a la Burzum. Twisted and distorted riffing is implemented in such a mind blowing way, and these echoing ambient sounds are prominently displayed on this very track. Any listener can witness the evil havoc, which transcends to an infernal cataclysmic reverberation. Half way through the track the band uses samples of wind as the ambient atmosphere carries on with hypnotic melody when suddenly everything breaks into chaos.

Metamorphosis is exhibited in its most bizarre fashion, the rhythmic drumming is backed up with the spewing hellish vocals, and this mid-tempo track is dominated by slow infectious guitar riffs. You can hear the chanting in the background with bleak and desolate guitar patterns sounding like an ultimate evil hymn. Within the without brings the clear similarities to Marduk, the straightforward blackened riffage with maniacal blasting are ominously melded. It feels like the entire set of tracks is being raised out of hell, magnified with force of darkness and led maliciously towards the light. And that’s when Hosanna kicks in rapidly like a destructive maelstrom. The album clocks in at 43 minutes providing the listener with memorable moments which most of the songs are very distinctive. Pallor Mortis is the final track that begins with a slow paced riff and breaks out into traditional raw and hyper black metal and is executed on the same level as the previous tracks. Hekatomb without doubt is a vicious inferno of the wicked and Funeral Mist has inevitably sets the bar high on the new studio album.