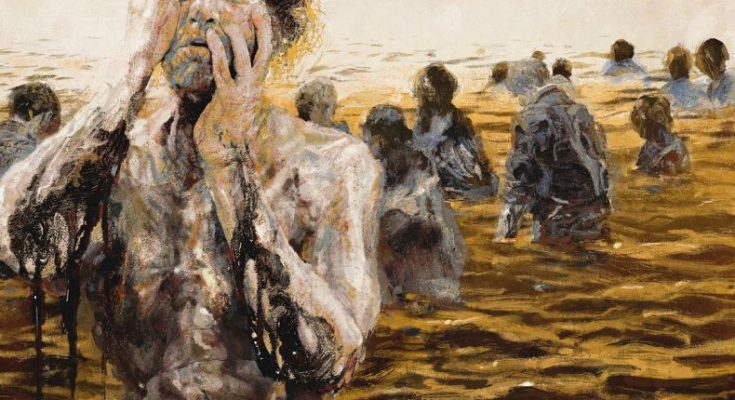 It was almost two years since the Portuguese black metal quintet Gaerea unleashed their debut album “Unsettling Whispers” into the world. An album that presented gnarly elements of modern black metal and featured plenty of fresh ideas. The sudden onset of this anonymous outfit didn’t only succeed in creating their own signature style, but they also seemed to be inspired by exceptional boundaries. Therefore their emergence was an outcome of a true musical vision. Like Mgla, Deathspell Omega and other prosperous bands Gaerea’s foresight is one of the reasons why they have separated themselves and looked beyond the traditional platforms of black metal. The band’s unrivaled vision of introducing new traits made them unique.

The sophomore effort ‘Limbo‘ has many variations and powerful degrees of diversity. At the same time, the music comes close to the debut album. Yet there are some clinical riffs and elements executed with daring and effective melodies. The virtuous opening track ‘To Ain‘ is a testimony to the band’s songwriting skills, the eleven minutes opening track is both daring and dynamic. The guitars strike with catchy bold riffs while the vocals are acutely furious sounding vehemently infuriated. Yet there is always a moment when the melodies provide an emotional sensation. The songs here are bolstered by rich and bouncy guitars, where melodies and rhythm are blended into a cathartic effect.

The musical direction wanders regularly away from the conventional methods of black metal. On this intellectual musical progression, one shouldn’t expect to hear the traditional clichés of the second wave of black metal. ‘Limbo‘ deviates from such course and drifts beyond to meander into an ultramodern style of blackened metal. ‘Null‘ for example escalates by the rapid pace of the percussion and droning guitars that create an impenetrable wall of sound. A core that is wrapped with multiple layers of the harsh driven riffs. ‘Limbo‘ isn’t only a powerful and organic record, the Portuguese quintet channels superlative forms of expressive melodies. The thick slab of crushing guitars and hammering drums creates a harmonic balance for the melodies to shine. Each minute of this immersive record the songs slowly infiltrate into your soul with its inspiring guitar technique and catchy rhythm. Gaerea delivers yet again an extraordinary listening experience.

‘Glare‘ offers extra brutal aggression with blast beats and showcases the dynamics in an overwhelming way. The innovative use of male chorale in the background once again proves the creative qualities of this artistic group. ‘Limbo‘ is a locomotive record that expands into deep artistic work and demonstrates a visceral complexity. While the previous tracks were somewhat furious, Gaerea puts the focus on bleak harmonic tunes in equal measures on “Conspiranoia“, bloated with rich instrumentation. The track is adjusted by a mid-tempo style, but once the song begins to depict the modern sounds of dissonance, the drumming pace increases rapidly and delivers some explosive blast beats.

Other songs like ‘Urge‘ magnify the effect of the riffs by implementing powerful guitar chugs. Album closure ‘Mare‘ is the centerpiece of the sophomore that extends to thirteen minutes. And begins with a majestic male choral section. Throughout the track the dual guitars execute massive riffs. Gaerea creates an ambient mood as the atmosphere becomes dark the catchy hooks of the melodies feel more focused. There are plenty of strong compositions that allow the song to transition from the chilling mid-tempo to the thundering pace.

This is truly a great album and I must say that Gaerea has once again outdone themselves. ‘Limbo‘ is an outcome of creative songwriting that makes this sophomore worthy of your time.