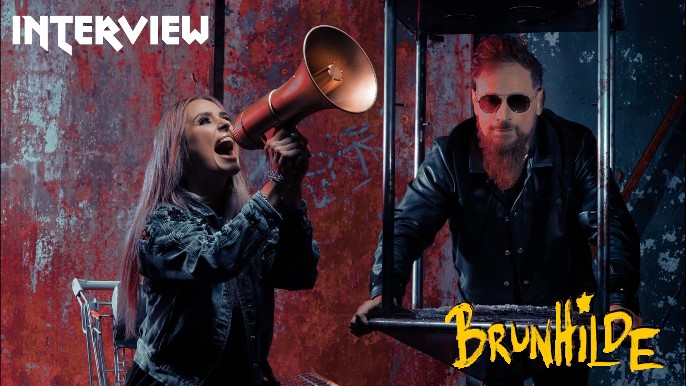 Every now and then a band pops up on our radar that immediately strikes a chord and grabs our attention. The German rock outfit Brunhilde is one such band. Their infectious blend of hard rock, heavy metal and punk made us think of the early sound of The Pretty Reckless and even Guano Apes at times and made us feel like there is a big future ahead of these people. So we reached out and had a short and pleasant chat with the lovely Caro (vocals) and her partner in crime Kurt (guitars) about their album ‘To Cut A Long Story Short’ and their music…

We talked about the great diversity you can find on their full-length release ‘To Cut A Long Story Short‘ and how they set out to include a highly diverse pallet of influences to avoid that all the songs sounded similar resulting in a boring records for the listener. And that goes together with their goal to somewhat provoke with their music and lyrics, hopefully making the listeners think. They also brought up how important it was for them to create captivating and high quality videos for the singles, now that they couldn’t present themselves properly through real live shows. Talking about live shows, Caro and Kurt described the high energy and good music that you can expect from a Brunhilde live show, something to really look forward to. At the end we shortly discuss how fun it would be to have a real Brunhilde beer (like the mock cans featured in the ‘So Bad‘ music video) or a prosecco, since Caro really loves drinking that. And lastly, they of course don’t forget to thank everyone who has been supporting Brunhilde and they are hoping to meet everyone in real life as soon as possible at an explosive Brunhilde show near you!

For all of that an more, simply watch the whole interview with these lovely people on our YouTube channel or right here: