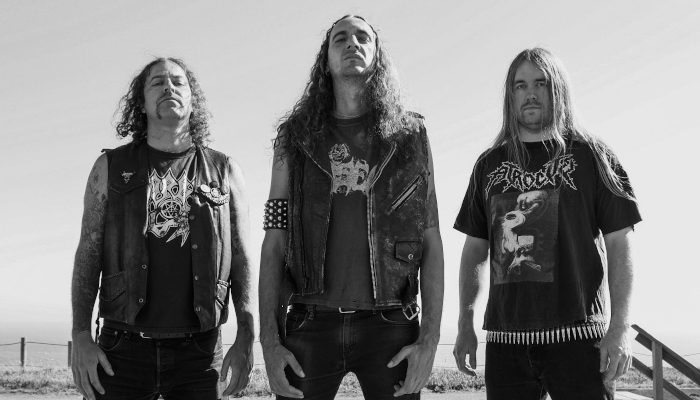 Interview Necrot – “We’ve all stepped up our game as players”

Death metal has changed a lot from the older days but luckily now we have numerous old school bands that blend the classic elements. The Californian group Necrot is definitely one of these bands that has a raw appeal to them. The level of the crude extremity of the fast tempos isn’t solely distinguished by the excellent riff work. If you are a fan of death metal, you’ll know that the Oakland trio (Sonny Reinhardt, Luca Indrio and Chad Gailey) influences extend from bands like Autopsy, Bolt Thrower and Grave. Necrot rose from the U.S. underground death metal scene in 2011 with a dynamic musical form, when I first listened to the band’s debut album “Blood Offerings” I was fascinated by the quality of the heavy crushing riffs. Perhaps the newer wave of death metal bands like Vastum, Acephalix and Necrot became the next cluster of originality to the underground scene of the U.S.A. While diversity and uniqueness reflected on the band’s debut album, the sophomore “Mortal” encompasses uncompromising rawness and vicious to the band’s newest material (read our review here).

We had the precious opportunity to fire off some questions to Sonny, one of the founding members of Necrot:

GRIMM: How have you been doing there in the craziness that is the States at the moment? Everything is well?

Everything is NOT well, perhaps because of the craziness! So much going on over here right now with people being so polarized politically and the coronavirus pandemic turning everyone’s lives upside down and inside out. Plus we have crazy forest fires all over the state of California where we live. Some of the biggest fires in our history. The air is thick with smoke and they are having trouble containing them. There is much more that is not ok and crazy at the moment, but we are hanging tough and hopeful for some positive change throughout all of this! Trying to keep that PMA you know?! We will get thru this and come back stronger.

GRIMM: Your newest album “Mortal” is coming out soon. What can you tell us about it and how was the response from the underground media and the fans to the couple of tracks you already released?

Yes our album is finally coming out and we couldn’t be happier to finally get to share it with everyone! So far the three tracks we’ve released have had great response from everyone. We’ve had a lot of support from all of different places and we’re really grateful for all the positive feedback and response! Hopefully the other tracks on the record will garner the same acclaim! We are very proud of it!

GRIMM: Is it weird to release your new album during this pandemic, not being able to go on the road and play your new work for your fans?

It’s been a bummer yes. We had to postpone the release of the album which ended up being cool in a way because we were able to do a long roll out with the promo for it. I think it’s actually helped a lot with the anticipation of its release. But not being able to do the tours we had planned around the release is far from ideal. We had full tours lined up for USA, Europe, and South America that were canceled until further notice. We can’t wait to get back to work on the road,play these new songs for everyone and try to keep reaching new places with our music.

GRIMM: Three years went between the first album and the second, did the songwriting and recording process change any bit?

In the those three years we toured and played a lot of shows with lots of really sick bands. Bands that we looked up to and learned a lot from. We got super tight playing all of our old songs. So much so that I think that the level up and expansion of our style was able to be a pretty natural progression. As far as the recording process goes,we went back to where we recorded Blood Offerings with Greg Wilkinson at Earhammer Studios. We have a great relationship working with Greg and he knows how to get really super sick brutal tones and drum sounds! He knows how to get our tones! He understands what we do just abetter than just about anybody else and helps push us to get the best takes possible.

GRIMM: When comparing “Mortal” to “Blood offerings” I feel that the song-writing has become more intense and sophisticated, the album is really chock full of crushing riffs. How do you feel the band evolved in the last few years?

Luca is the main songwriter and I feel like he’s really progressed with the brutality and sophistication of the songs and lyrics. But I feel like we’ve all stepped up our game as players and as far as playing together as well. Mortal has more brutal and heavier riffs, sicker drumming and more solos to dive into. It’s the next logical progression of Necrot.

GRIMM: The album title track is by far your longest and one of the most sophisticated tracks I’ve heard so far this year. Was it a challenge to push the boundaries a little further this time?

I feel like it was, especially since we were touring a ton all the way up to about a month and some change until it was time to record the album. We basically took a week off after back to back tours across the USA, Australia and Japan and started practicing and learning all the new tracks by practicing five days a week right up until the recording. That song definitely has some tricky little sections that took some time to get right with the time that had to get it tight.

GRIMM: Both “Blood Offerings” and “Mortal” have been released through Tankcrimes record label, could you tell us the reason why you chose this label?

We have been friends with Scotty who runs Tankcrimes for ages so we trust him and he’s always super awesome and creative to work with. He’s always been such a positive force in our local scene and worldwide. Since we’ve started working with Tankcrimes he’s been nothing but dedicated to us! We have stayed because we feel like he treats us way better than a lot of the bigger labels would. We feel like we aren’t going to get lost in a huge roster of bands that is typical for a lot of bigger labels. Especially if they are just after the next big thing. It doesn’t feel like we’re just cogs in a machine. We feel a mutual respect and devotion to each other that is unique and special in the game. We love the family vibe of working Tankcrimes and that we’re all local to each other. The communication is easy and that’s really important to have. I feel like we’re very very fortunate to have all of that going for us! Thank you Scotty!

GRIMM: The cover artwork was drawn by Marald Van Haasteren again, did you come up with the concept or did you give the artist free reigns?

A little bit of both. We send Marald lyrics and give him some basic ideas but let him come up with his own interpretation of things. From there we collaborate on it until we’re all happy with it. He’s a fantastic and incredibly talented artist who has a deep understanding of how to take what’s on the inside and bring it out onto paper.

GRIMM: So as a band that plays old school death metal, which are the major bands that had an influence on your music? And do you only listen to the U.S. death metal bands?

GRIMM: It’s quite rare to find a death metal band that wear the influences from punk music on their sleeves, do you find it unique and fascinating to explore these two sub-genres at visceral depth?

Absolutely fascinating and it helps to keep it interesting. But mainly because we all have a background in punk so it’s natural for us that we would. I feel like for a lot punk musicians who get better at playing their instruments it’s just natural that they would to start crossing over to playing metal. Some of the best fuckin metal has someone in the band who also loves punk. IMHO

GRIMM: All the band members play in different death metal groups like Vastum, Acephalix, and Mortuous, what have you all gained from being a part in other bands and does that affects Necrot in any way?

Playing in other bands allows us more freedom of expression and other ways to get out there and do more things that everyone wants to be able to do musically. We have a great pool of musicians here in the Bay Area to jam and create with. I would like to think that helps everyone in Necrot get better at playing in some ways too.

GRIMM: The death metal genre has been quite solid and consistent since the last three decades. How do you see the future of the genre going in the future?

I think it’s a great time for death metal and that there’s a lot of originality that will keep growing if bands keep pushing  themselves to grow and find it. As long as people find the ways and the willingness to stay extreme, heavy and brutal we will continue to keep hearing new sounds in the metal world coming forward for a long time to come. I often tend to think that there is no old school and that death metal and heavy metal in general is timeless.

GRIMM: Any last words before we conclude this interview?

Thanks for the questions! Stay brutal, find uniqueness, don’t be afraid to express your ideas and thoughts. Stay true to yourself always and forever!

On behalf of GRIMM, we’d like to thank you so much for giving us the time to answer our questions, best of luck and stay safe.