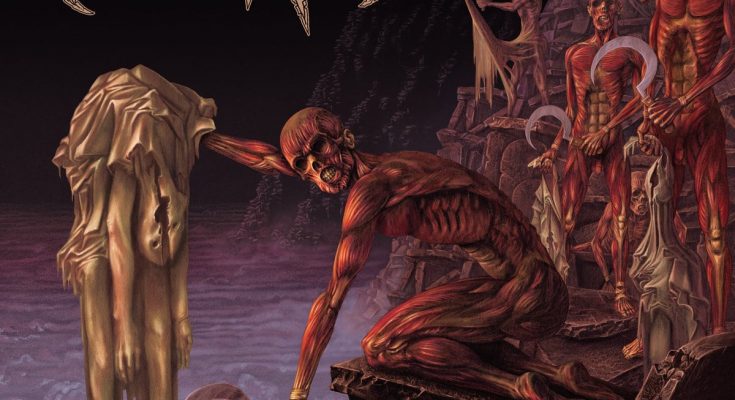 It’s been three long years since the California based death metal outfit Necrot released their debut album “Blood Offerings”. The second album “Mortal” marks the return of Sonny Reinhardt (guitars), Luca Indrio (guitars, bass, and vocals), and Chad Gailey (drums). The members have been active in other death metal bands such as Vastum, Mortuous, Acephalix and Atrament. Necrot plays an energizing form of old school death/punk metal with a revivifying spirit. Since the formation in 2011, they have been stabilizing their style with originality. And it’s not surprising to say that their latest album is a raw and vicious piece of malicious death metal.

There is a certain intensity coming from the guitars department as the album quickly moves to hellish fury. The growls are demonic and add more fuel to the burning intensity of hellfire. Mortal doesn’t only concentrate on the raw elements of death metal that defined the band’s style, the trio avoids tiring repetitions as they prefer to keep things more simple. From the onset of opening track “Your Hell”, Necrot seems to be on fire, as the band delivers organic music powered by the quality of vintage classic death metal riffs. Chad Gailey’s performance presents an organic style of drumming, where the songs transitions between mid-pacing and fast tempos.

Mortal feels coherent with the riffs sounding wicked and a lot of variation, the guitars mostly have a jarring and buzz-sawing tone. “Dying Life” builds into brutal percussion and shifts at blistering speed backed by chainsaw riffs that cut through the hammering drums. Necrot channels through these organic forms of death metal, but what they present here is a visceral performance where grooves are also emphasized. The tracks will immediately strike the listener with the heavy drums bludgeoning. “Stench of Decay” is quite aggressive and the guitars create a thick wall of sound while the drums definitely show no signs of reducing the level of violence.

Necrot clearly emphasizes the riffs and eschew complexity, “Asleep Forever” maintains the quality of riffs with blistering soloing hooks and a heavy pace kept constant through the drums. This blend of sonic vehemence isn’t quite new, Necrot simply opts for more pummeling death metal rampage. Other tracks like “Sinister Will” demonstrate how the band’s influences extend over 80’s death metal. On this track particularly, Sonny Reinhardt and Luca Indrio found a way to channel the riffing style of early Bolt Thrower’s album Realm of Chaos.

This almost throwback album covers old school notions of crust/ punk death metal. One of the main strengths of the album is how the dual guitars are characterized by the influxes of catchy rhythms and extended solo sections. These dominant elements structure the general sound of the songs, making them direct and accessible with plenty of spicy solos thrown into the mix. On “Mortal” Necrot offers a proverbial slab of death metal riffs with a wicked intensity and full of old school quality. There is also a remarkable flair of infusing melodies into the song structures.

There are many elements that make each track stands on its own. Each track transitions into many sections and are accompanied by heavy grooves. With only three members, Necrot wreaks havoc like no other. For example “Malevolent Intentions” demonstrates their prowess. The title track settles on mid pacing tempo while the vocals sound brutal. This captivating eight minutes of a song is brought by down-tuned distorted guitars.

Overall Necrot has released a gritty album that is built on the intensity from its first opening track to the very end. Mortal is definitely a must-buy for the death metal junkies and especially for fans of Vastum and Autopsy.

One thought on “Necrot – Mortal”