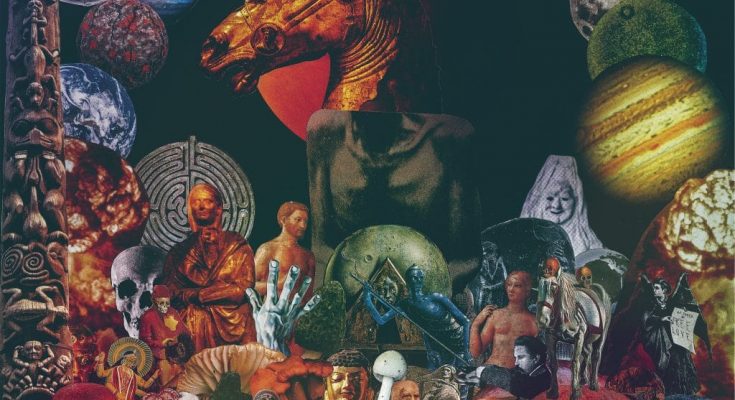 Last year I discovered the Finnish psych rock band Jess and the Ancient Ones at Tuska festival in Helsinki. Being a big fan of modern vintage rock with a big nod to the sixties and seventies rock decades, I immediately took a big liking to these guys. Eventhough Tuska is a big metal festival, the band couldn’t have fitted better in between all the metal bands: a doomy psychedelic vibe with a damn heavy sound. So I was very curious if their latest release The Horse and Other Weird Tales was about to convince me even further.

With a very spacey intro and the very fitting Twilight Zone quote “You unlock this door with the key of imagination” the album kicks off with Death Is The Doors. The song itself, heavy on the Hammond organ, catapults me straight away back to those good old years of sixties and seventies rock with a sound clearly inspired by The Doors (hence the title). Imagine the trippy rock of The Doors but instead with the legendary Janis Joplin from that same magical age on the vocals. Because that’s who Jess regularly reminds you of: in one moment she sounds all sweet and pure and in the next she burst into a soulful explosion of vocal chords. Put those impressive vocals on interestingly groovy and subtly crafted music with a production/mix that somehow manages to sound absolutely crisp and clean without losing any of that raw feel of a jam session and you know you got a home-run in your pocket.

Whether you listen to the dance-inducing boogie groove of Shining or the slower bluesy/jazzy vibe of Your Exploding Head one thing keeps being highlighted: the amazingly clear and mesmerizing vocals by Jess. Supported by some great musicians those vocals simply get put on a pedestal in the spotlight and I suspect that without Jess the band wouldn’t be able to captivate the same magical psych vibe as successful as they are doing now. Especially in You and Eyes you get a sense of how massively important that voice is to the music. Big chunks of that song are basically carried by Jess‘ voice going from soft and smokey angelic to powerful and slightly evil, backed by minimal music.

With Return to Hallucinate, (Here Comes) The Rainbow Mouth and Minotaure the amount of Hammond organ gets cranked up to serious levels, but that only adds to the songs. Of which (Here Comes) The Rainbow Mouth and single Minotaure are damn catchy and again very dance-able… And damn, those bass lines in Minotaure are juicy! Anyway The Minds Flow on the other hand is an epic of nearly 8 minutes that manages to captivate everything the band stands for and is the perfect closer for a way too short album. The melodies, rhythms and emotions constantly seem to shift while still maintaining a coherent structure and sound in all the trippy madness.

The Horse and Other Weird Tales simply brought a big smile on my face and I felt literally sucked into the bit over half an hour of some of the best “vintage rock” I’ve heard recently. It might remind you of more successful bands like Blues Pills, but comparing their latest offering to this album, Jess and the Ancient Ones definitely got the better of them. It’s even more than before a look back to the past of the “Woodstock era” with the heavy and doomy sound dialed back a little bit. But luckily without losing anything of their edge, rawness and originality. If there’s one criticism, it’s as said before that the album is just too short to my liking… Strongly recommended for fans of psychedelic and bluesy rock!