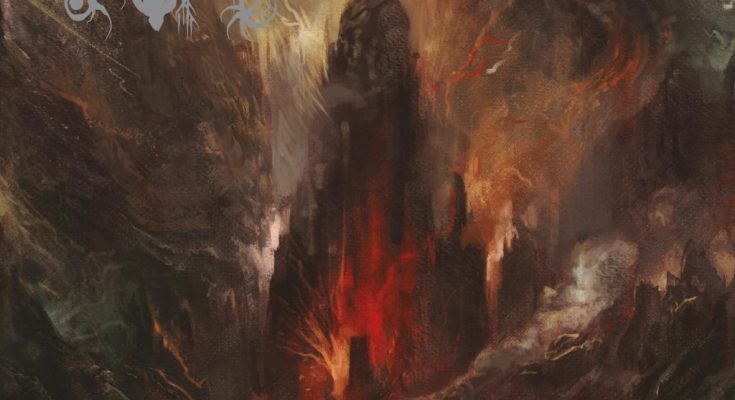 Two years after debuting their EP ‘II‘ Swedish black metal formation Malakhim returns with their highly anticipated first studio album ‘Theion’ released via Iron Bonehead Productions on the 8th of January 2021. Formed in 2016, Malakhim carefully continues to forge their style apart from the Swedish black metal bands. With confidence they provoke the orthodox way of blending the aggressive and raw form of black metal. The album is comprised of eight tracks fully loaded with warmongering aggression and tremolo pickings. However, the band does not emphasize the traditional style as one would expect. This somehow makes their music quite unique and different from the stereotype of Swedish black metal bands.

‘Theion‘ is brought about by the fine craftsmanship of musicians who have masterfully succeeded in releasing a strong and organic album. Each of these talented members showcases their skills in songwriting and experience in tracing the roots of the early Scandinavian black metal. Malakhim took progressive steps to perfect their sound. It was clear that the band was honing their craft, yet it was only a matter of time before they would rise to the center of attention. But humble beginnings always lead to something big and that’s what ‘Theion‘ is all about. The album opener ‘There is a Beacon‘ is a mid-paced riffing track that meanders through some fast drumming sections and double bass proceeding to considerable blast beats. Whereas the drums on the following track ‘Merciless Angel of Pestilence‘ unleash a heavy bombardment. The guitars engage in some black’n’roll riffs and dissonance, followed by ferocious percussive attacks.

The focus here isn’t concentrated on the catchy type of melodies. Each of these tracks evokes the raw and the old school landmarks of Swedish black metal. With other faster tracks such as ‘Slither O Serpent’ the listener will come across the cold and hellish quality of black metal. Rhythm and lead guitar insertions add splendor to the song texture and they work in conjunction with the double bass. Throughout the album, the sinister tone of the vocals creates an evil atmosphere. The guitars also offer plenty of tremolo lines and melodies. ‘Chalice of Ruin‘ stands as one of the album’s highlights. The subtle discharge of the melodies works fine with the slow pacing drums.

Despite the sonic personification, it’s hard to summarize the album in one word. ‘Theion‘ is driven by the musical integrity of its blazing riffs while the drums are notable for the tempo changes. Malakhim on their first installment conjures up a dark and hellish atmosphere through the use of guitar arrangements that create many memorable moments. Across the duration of forty-one minutes the listener will come across pure and frenzied fury. ‘Theion‘ brings the moderate aggression of the second wave of black metal. A faster and melodic track like ‘His Voiceless Whisper‘ is filled with eerie melodies and harrowing vocals. Another particularity that makes the album so bewitchingly evil is the atmosphere the guitars produce. The songwriting gives the album a varied sound. This is why the songs are approached with complexity. There’s no question that the raw production enhances the quality of the music, making each of the songs sounding raw and evil.

As a result of the blood-thirsty delivery, the ominous tone of the vocals matches the gloomy atmosphere of the songs. Therefore, the themes on the album mostly depict a demonic feel of darkness. There is consistency among the songs. While the usage of the melodies feels twisted, they somehow fit perfectly with the flow of the blazing riffage. The drums mostly shift from mid to fast paces, allowing for multiple changes in the tempo. For example, ‘The Splendor of the Stillborn Stars‘ reveals an aggressive manifesto.

It is carried by powerful blast beats and ripping tremolos, which adds a pure rawness to the overall atmosphere of the album. The final track ‘Theion‘ offers an incredible performance from the Swedish quintet and offers some intense rapid drumming while the transition midway through the track is characterized by the slow tempo of the lead guitars, hence creating a palpable ambiance. Malakhim‘s debut album is by far the best offering to date from these Swedish warmongers, this is highly recommended for fans of Bathory, Watain, and Valkyrja.

One thought on “Malakhim – Theion”