Martyrdöd are quite fresh to me. It’s only been a few years, really, since I saw them popping up on festival posters. I found the name intriguing enough to go and check out their sound, especially seeing as they were always billed on other grindcore, crust or d-beat line-ups. Ever since I first listened to their 2016 record ‘List‘, let me tell you, I’ve been in heaven. Their music contained so much emotion, such primitive rage, such plaintive anger. A few month ago the Swedish blackened crust quartet dropped their seventh album ‘Hexhammaren‘. I had high expectations for that one, and it didn’t disappoint.

Crust is a lot of fun. It’s heavier and more technical than punk, but it’s easier on the ears than say death metal. When putting on some classic Doom, for example, I feel relieved of every need to expel my rage and anger towards everyone and everything. But the experience can be over fairly quickly, and it’s often missing that emotional edge that gives context to all that rancor. Now Martyrdöd fills that void quite nicely with heartfelt melodies which are typically found in Scandinavian metal.

Melody is indeed to be found all over ‘Hexhammaren‘. Guitar hooks on songs like ‘Rännilar‘ and ‘Den Sista Striden‘ tug at my heart strings in very a visceral way. Even the odd duck ‘Nästa Syrien‘, which beats to a rhythm that is surprisingly different from the rest of the album, manages to give me goosebumps all over. And the fact that production-wise it’s clean as a whistle only serves to reinforce the whole experience. Even if I am mainly comparing to other bands within the genre, who tend to record their fifteen-minute albums with a potato for a mic inside a recording room which only consists of four cardboard walls.

Not only is it a melodic album, but it is also among the more relentless. The typical d-beat drum pattern gives the album its sense of furious urgency. Drummer Jens Bäckelin‘s stamina is inexhaustible. I can honestly not wait to see Martyrdöd‘s live performance. The sweat must just drip off the stage like a flood. After hearing the furious pummeling and grinding strings on ‘Helveteslarm‘ or ‘Cashless Society‘, you’ll probably be making a trip or two to Ikea to buy some new furniture.

While you are destroying your living room, you try to keep up with Mikael Kjellman‘s howls of despair and anger, which he forces out of his lungs with a primitive force that has me worry about his vocal chords. His slimy rasps get you pumped just as much as the musical onslaught on which they’re sung. And whenever you think you hear a more uplifting tune on guitar, he is here to remind you that you’re listening to a deadly serious record. 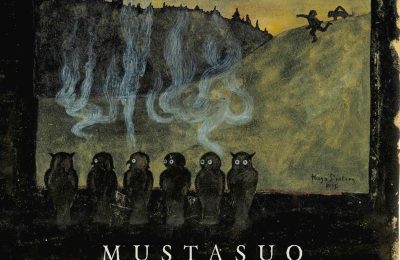