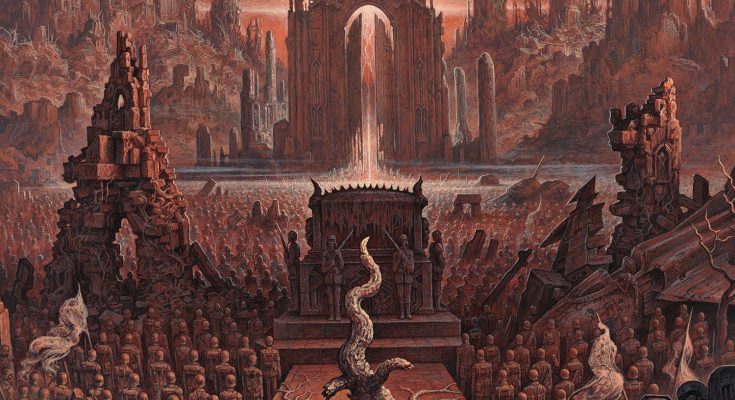 Memoriam was formed years later following the tragic death of  Martin Kearns, the drummer of Bolt Thrower. Since then the band was suspended and put on hold, and the opportunity to create a new project band came to further development. Thus Bolt Thrower’s inheritance was assailed to Memoriam whose members come from Bolt Thrower and Benediction, two legendary Death Metal bands from Britain. After their debut release, For the Fallen, which was released via Nuclear Blast in 2017, Karl Willets and his fellow mates have returned with the sophomore full-length album entitled The Silent Vigil. With Frank Healy on bass, Scott Fairfax from Benediction on guitars, Andy Whale on drums and vocalist Karl Willets from Bolt Thrower. The new album is composed of nine tracks of mid pacing old school crust/death metal. The explosive opening Soulless Parasite shifts into battlefield with heavy crushing guitar and plucking bass lines. Willets‘ growls are still recognizable and they have been improved since the previous album. The drums are loud and more active being handled by a well experienced drummer. Nothing Remains combines stomping grooves and mid pacing riffs. The British death grinders ought to show more effort with the new album by delivering some quality death metal with superior standards.

From the Flames is displayed with wide aggressiveness, Memoriam adopts the best elements while emphasizing the importance of groove into their new songs. They also meld new elements like crust/punk with mid tempo death metal, as for the guitar riffs they are potent with swag of classic death metal. The Silent Vigil is majorly greater album than the previous and has a manifold of excellent ingredients in terms of accomplishments. Bleed the Same is a doom oriented track composed with effective riffs and melodies, and it is one of the highlights and personally one of my favourite songs from this album. Karl Willets lyricism philosophy talks about the rise of racism, other contents discuss about the rise of the nationalistic xenophobic ideologies.

As Bridges Burn reminds me a lot of Bolt Thrower. It captures the speed and the aggressiveness and the groove always falls at the centre of the tracks. The drumming techniques are shown with great skills here. The double bass drums pounds heavily, layered with the intensity of  jaw dropping riffs. However the album escalates into a rawest scale with the second portion of the final four tracks, aiming to show vigorous energy. The band members display solid coherency and the latest offering is a step forward towards re-creating the old school death metal sound with new ideas. Memoriam has proved that they are capable of writing shorter and longer tracks, giving a good balance in structuring their material. They have harnessed their long experience to craft a genuine criteria to compete with new acts from the underground metal scene. In addition They have released two albums within two years and this indicates that Memoriam are taking leaps in order to create their own style, as Silent Vigil includes the best parts from the previous album. They also gained confidence and clear outlook to the future, therefore it’s not surprising to see their enthusiasm behind their music. The new songs are more focused and they have a natural flow of sounding powerful. Although the similarities to Bolt Thrower are very distinguishable, Memoriam has gradually developed more nuanced.

The New Dark Ages and No Known Grave are up tempo tracks, boosted with heavy riffage which belongs to the 90s death metal authenticity. So powerfully and skill fully arranged, most of the tracks have a force full manner of sounding brutal and raw! Memoriam marches with steady leaps into the fields of demise as they seem undaunted and raised with the spirit of valour. The graven artwork of the new album was designed once again by Dan Seagrave, and with the latest output from the British veterans who have proven a compelling fondness for Old School Death Metal. The Silent Vigil is an Old School Death Metal album with modern production. Finally Memoriam has delivered an excellent album and I am confident that this release will be among the top death metal albums for this year.