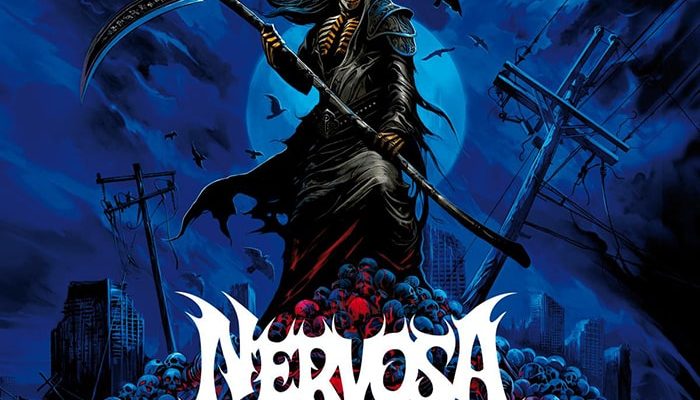 I can still remember being mesmerized when I first discovered Nervosa as they performed on stage at the Antwerp Metal Fest in the summer of 2017. I had never heard of them beforehand, but was instantly hooked by their potent mix of Brazilian thrash and death metal. I followed their progress ever since and so it came as quite a shock to me when it was announced in April of 2020 that both vocalist/bassist Fernanda Lira and drummer Luana Dametto decided to call it quits. I honestly thought this would mean the end for Nervosa.

Despite being formed in the middle of a global pandemic, the newly formed lineup immediately started working on Nervosa‘s fourth studio album ‘Perpetual Chaos‘. The four girls flew over to sunny Malaga in Spain to record the album in an isolated home studio. A four-part documentary on this recording process was recently released on Youtube. It’s a pretty fun watch, if you have some time to spare. Better put on some subtitles though.

Now, on to the album itself. Naturally, I was a bit concerned about the new direction Nervosa would take with its new international lineup. Thankfully, my concerns were quickly put to rest with the release of the first two singles ‘Guided by Evil‘ and the title track ‘Perpetual Chaos‘. Those two tracks perfectly showcase how the band remains faithful to what came before, while simultaneously sounding bigger, catchier and more polished.

From the very start, the album is relentless in its pacing. With pummeling, fast-paced tracks like ‘Venomous‘, ‘Time to Fight‘ and ‘Until the Very End‘, alternating with more mid-paced tracks like ‘Blood Eagle‘ and ‘Kings of Domination‘, without ever losing its aggressiveness. I’ve been listening to this album for almost a month now and can honestly say that this might be Nervosa‘s best work.

That is not to say that the album is flawless. The lack of variety sometimes puts it at risk of sounding a bit too repetitive. Certain tracks like ‘Godless Prisoner‘ and ‘Pursued by Judgement‘ also leave less of a lasting impression. These are but minor complaints however. With 13 tracks and almost 45 minutes of blistering thrash/death metal, there is more than enough material here to get your fix.

The album also contains a couple of welcome surprise appearances, with Schmier (Destruction) and Erik “AK” Knutson (Flotsam and Jetsam) providing guest-vocals on ‘Genocidal Command‘ and ‘Rebel Soul‘ respectively. Nervosa has toured extensively with these two thrash veterans in the past, so that probably explains why they agreed to contribute to this album. ‘Genocidal Command‘ sounds very much like a track that could belong on a Destruction album, while the catchy ‘Rebel Soul‘ has more of a punky Motörhead vibe to it.

The album concludes with the melodic yet simultaneously frenetic ‘Under Ruins‘ which I really hope to experience live at some point in the future. It would also be interesting to hear this new lineup perform new renditions of older Nervosa songs. While I was initially worried, Prika Amaral has succeeded in finding some truly talented musicians to replace Fernanda Lira and Luana Dametto (who have since formed the death metal band Crypta). Here’s hoping that this new version of Nervosa is here to stay!

The cover artwork was created by Abrar Ajmal. It perfectly encapsulates a lyrical passage from ‘Perpetual Chaos‘ s title track: ” In a devastated world, I see Death rise, Upon a pile of skulls, There’s no salvation”