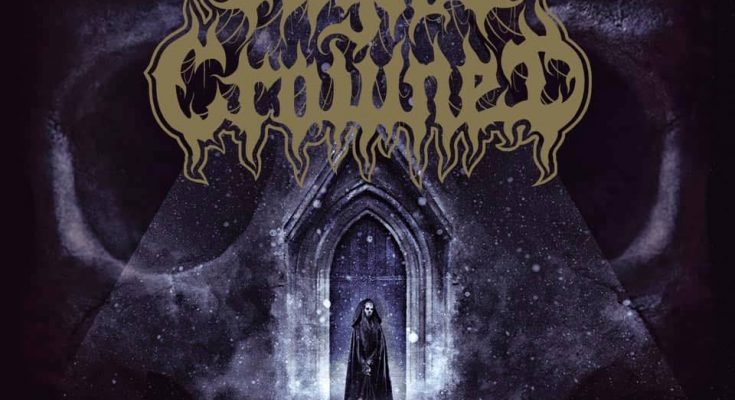 From Gothenburg, Sweden, the relatively new record label Noble Demon brings you the first full-length album of Night Crowned: “Impius Viam“. Formed by ex-members of Dark Funeral, Cipher System, Nightrage and Eternal Grief, Night Crowned focuses on the sheer aggression of Swedish black metal intensity and the supercharge effect of the symphonies. The album incorporates also many elements from the Gothenburg style of melodic death metal. Fronted by vocalist K.Romlin, guitarist/vocalist J. Eskilsson, drummer J.Jaloma, and bassist H.Liljesand, this unique hybrid outfit combines the characteristic of the Swedish blackened metal trademark and presents them with plenty of fiery solos.

From the spellbinding touch of captivating symphonies and the haunting choral work on the intro, Impius Viam, to the powerful double bass and abrasive riffs on second track, Reborn, they all reveal the extreme presentation and superb melodic qualities. The strong vocal performance is steered by malicious riffs and powerful torrents of blast beats, showing the twisted nature of this band. Through a compelling performance of fiery melodies and aggressive juxtaposition, Night Crowned illustrates the melodic black metal elements paired with symphonies and the brutality of death metal.

As soon as the third track Nocturnal Pulse begins, you’ll hear the significant role of the lead guitars displayed skillfully. Impius Viam presents a modern style of death metal like Fleshgod Apocalypse and Behemoth. The tracks are instinctively brought by solid aggression while the manifold display of the keyboards here and there enhances the tempo.

Besides the driven symphonies, Night Crowned also brings in a few string passages on IRA. The drumming performance is robustly played, while the multifaceted vocals of K.Romlin varies from low black metal pitches to roaring growls of death metal. The tracks on the debut album are layered with catchy guitars and symphonic touches, and the blast beats kick in at full throttle.

Your Ending, You’re Demise is introduced with the aggressive style of riffing with many hints of Swedish black metal. The songwriting often features tremolo pickings and the mid-tempo parts always seem to feature dual vocals. Your Sacrilegious Flesh is ultimately designed with operatic symphonies and hellish riffs. Dynamic riffs that constantly build up a powerful tempo and melodies embedded into the song texture.

Impius Viam is an extremely fast-paced album with unhinged tempos due to energetic variations. The debut album includes 12 tracks and one of my favorite tracks is Unholy Path. This track captures the symphonic and the melodic aspect of many modern extreme acts. The lead guitars always grab my attention, J. Eskilsson‘s proficiency brought in to focus his melodic solos are quite catchy and impressive.

Night Crowned‘s music feels refreshing with among other memorable songs for instance All Life Ends. Breathe No One and No Room for Hope both sound refined and moderately symphonic. Impius Viam is driven by energetic grooves and guitar solos. Album closer Ego Sum Bestia has many aspects from clean vocal passages to fiery blast beats. The band comprises multiple elements from avant-garde and modern melodies, Impius Viam is both aggressive and extreme.

If you are into bands such as Fleshgod Apocalypse and Dimmu Borgir then give this album a shot.