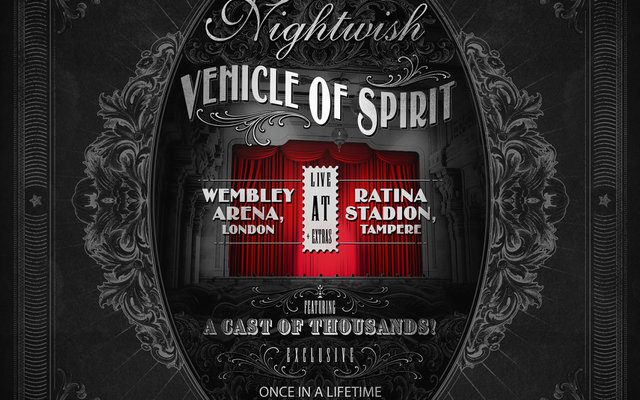 For months and months I’ve been looking forward to my all-time favourite band’s newest DVD, Vehicle of Spirit by Nightwish. If you want me to explain who Nightwish is, I’d advise you to crawl back under your stone. Or better stay here for a while, because the DVD is certainly worth a watch! The Finnish/Dutch/English crème de la crème of the symphonic metal scene treats us this winter with a live DVD containing two of their most memorable performances from the Endless Forms Most Beautiful world tour. The first DVD was recorded at their sold out Wembley show and the second gig is a home match at the Ratina Stadion in Tampere, Finland. On top of that, you’ll also get an extra DVD with live material such as videos filmed at other venues, guest performances and an interview with Richard Dawkins. How cool is that? Read on what the band’s favourite professor is doing in this story and why Nightwish proves with this DVD that they are a true vehicle of spirit

I had the pleasure of seeing the band twice in Belgium during this tour. I knew more or less what to expect from the DVD but both the Wembley and the Tampere gig had that ‘little extra.’ The Wembley show opens with Shudder Before the Beautiful. The tone is set for the rest of the evening. The members are definitely up for  an intense, dramatic but most of all fun party. The audience thinks alike and responds massively with claps and cheers. The bridge of Shudder Before the Beautiful marks the first highlight of the gig. Singer Floor Jansen sweeps up the audience while keyboard player Tuomas Holopainen and guitarist Emppu Vuorinen fight each other with solos. The result is an incredibly energetic atmosphere that can even be felt from behind your TV-screen. An extra portion of energy is brought by multi instrumentalist Troy Donockley who joins the band on stage for playing the Uilleann pipes on My Walden. After the obligatory ‘Good evening Wembley’ he and the other band members set the venue on fire with the jolly and folky My Walden. Another highlight follows immediately when bassist/vocalist Marco Hietala shifts down a gear with While Your Lips Are Still Red. In this sober ballad, Marco shows the softer side of his voice and proves that he is able to sing different styles. After seeing/hearing this performance, you cannot but respect him.

The setlist is pretty versatile. The band also plays their 14-minutes epic The Poet and The Pendulum from the Dark Passion Play album. The quiet intro with hypnotizing visuals projected behind the band are only the calm before the storm. The children’s voice on the backing track fades out and Emppu Vuorinen and Marco Hietala strike their guitars as if their lives depended on it. Speaking of powerful. This is one of the songs that reflects Nightwish’s musical colour palette; it’s a dark, elegant, bombastic painting within a heavy metal frame. They also treat their audience with the hit Nemo and even a golden oldie from the Oceanborn days; Stargazers. As expected, the band finished their two hours’ concert with The Greatest Show on Earth. That’s where Richard Dawkins enters our story again! After some harmonious duets between Floor Jansen and Marco Hietala and a live imitation of monkey sounds by Troy and Marco (really, their talents know no limits) the curtain is about to fall. All of a sudden professor Dawkins enters the stage and cites some lines from his own works that Nightwish quotes in this song. And with that, the very final tile fell from Wembley’s roof. If there only was one of course.

At the Tampere show the band played a slightly different set. An absolute highlight is the acoustic ballad The Islander that just like While Your Lips Are Still Red serves as a moment to take it easy and put your lighter in the air. Once again, it is Marco Hietala who is the shining but rough star of the song. After some jokes, he seems to be about to play the song all alone. He doesn’t only strike a chord on his guitar, but also with the audience. He creates a very intimate atmosphere by softly singing and by gently playing his guitar. The sound gets bigger and bigger as the other band members join him. Another Nightwish member that had a moment of fame during this show is Kai Hahto, also known from his work at Wintersun. He’s going completely crazy during the Weak Fantasy intro. That man knows how to drum. The band also plays two older Nightwish songs from the Tarja Turunen era: Stargazers and Sleeping Sun. It is just breathtaking to see how Floor Jansen pulls off these operatic and technical songs. She seems to do it effortlessly. As an old school Nightwish fan I’m delighted to say that she makes the classic songs sound at least as good as the ‘original’ versions. I mean, just watch and be amazed.

Of course the band also played Ghost Love Score. Would this be the ultimate Nightwish song? It creates such a great atmosphere and you can only smile from such beauty. Just look at Emppu Vuorinen while he plays! Happy band, happy audience. Nightwish, don’t ever remove this one from your setlist. This concert is also closed by The Greatest Show On Earth. The sextet plays this versatile song without any flaws and shows that Nightwish is a group effort. They are rewarded with a huge and well deserved applause from the audience. After seeing these two shows I can only conclude that this is a band at the height of their career. Everyting seems to be right. After twenty years they are stronger than ever. It’s not only the music that’s on point, but also the shows itself. The impressive visuals and the light effects that go with it add to the magic. It cannot be highlighted enough that Floor Jansen is thé frontwoman the band deserves. She can do opera, she grunts, she can sing mean heavy metal or even soft ballads, she headbangs like a madwoman and she’s passionate as hell about what she does. That’s why she lifts Nightwish to the highest level. But Nightwish consists of six talented musicians that clearly know what they’re doing. They mean it when they play, as you can see on the DVDs. Still looking for a late Christmas present? I’m quite sure that your friend, mother, dog, girl-/boyfriend or the average Slayer fan will have to admit that these are impressive shows. It’s a must have for every fan of the genre. I can’t wait for what they will bring us in 2018 after their well deserved break.