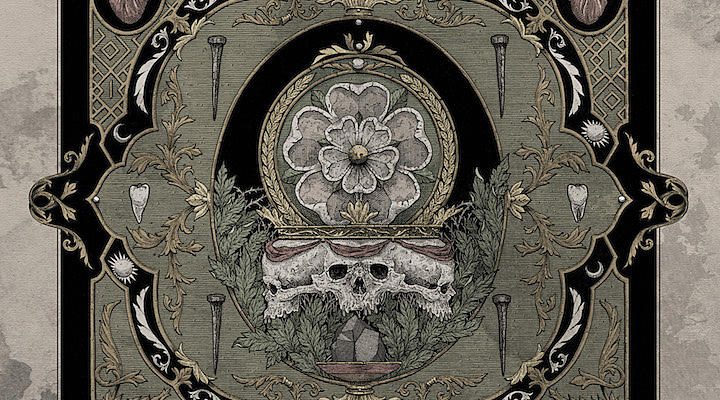 The British doom metal institution, Paradise Lost, has set a high bar on their latest release ‘Obsidian’. Over thirty two years they have gained admiration and solemn reverence, broadening from traditional death/doom metal to electronic facets of gothic rock. Paradise Lost began their glorious epoch in 1988. Their most renowned outputs such as ‘Gothic’ and ‘Draconian Times‘ still count as monumental records today. The veterans have a place in the hearts of their loyal fans which made them stand like awe inspiring gothic architecture. Beyond the boundaries of their transcendent art of music, the gothic doomsters have brought timeless classics in the bygone past. Yet there is always something empyreal about them: in the sense of music, their latest albums such as ‘The Plague Within’ and ‘Medusa’ saw them venturing back to the old ways of death/doom metal.

The band’s 16th album, is yet another ornate record embroidered with fine elements. Paradise Lost once again presents the power of Nick Holmes‘ vocal performance. The opening track ‘Darker Thoughts‘ casts its divine melodies, although it’s quite unusual for an album with such a title to begin with an elegant, acoustic guitar. The ponding dirges of the articulate guitars emanate heavy waves of bleakness and the pondering deathly growls sound doomy and potent. ‘Obsidian‘ showcases the delicacies of the orchestral atmosphere with the guitars mastered by Gregor Mackintosh and the poignant rhythm vibes splendidly delivered by Aaron Aedy.

The second track ‘Fall from Grace’ is brought to perfection by slow lumbering doom riffs which cause multiple shifts on tempos. The strength of the deep growls alters between the soaring vocals where they add a sense of somber atmosphere to this beautiful track. This refined signature sound, which we have become familiar with, is delivered through high quality.

Through catchy and refined melodies swelling in the repetitive choruses, the third track ‘Ghosts’ captures the comparative elements of ‘Draconian Times’ with its compelling grooves. ‘Obsidian‘ is rife with monumental riffs and catchy verses that will surely bring pleasure to the fans. Unlike ‘Medusa‘ which featured many old school doom riffs: the predecessor was dominated by the fierce motifs and archaic atmosphere. The dual guitars have a gripping effect on the following track. ‘The Devil Embraced’ is arranged to fit the sullen mood. With surreal melodies emitted from keyboards and a church organ, the riffs ebb and flow, which gives a bombastic feel. As for the solos, they illuminate the song texture on ‘Obsidian‘. The vocals are calmly demonstrated and attained in a gothic fashion.

The transition from deep growls to stylish, crooning anthems is applied to bring a powerful effect. The new album also offers some subtle symphonic orchestration. ‘Forsaken’ follows in the same style and is ornamented with catchy guitar qualities. ‘Obsidian’’s musical aspect is highlighted by the melancholic clean vocals, despite the deep growls which are used at times. The music is richly enhanced by the elements of gothic doom metal, although each track includes a set of heavy guitar impulses that creates many crushing tempos. Paradise Lost‘s sonic architecture is still bound by the modern fashion of melodic gothic/doom. Verily, this newest offering contains many of these antique melodies.

Stephen Edmondson‘s rhythmical throbbing on the bass guitar wafts through the songs and the loud hammering beats of drummer, Waltteri Vayrynen are efficient. While these edges have been reformed and refined over the past, their heaviest tracks see Nick Holmes implementing his obscure growls as featured on ‘Serenity’. The latest achievement is beautifully polished by the opulent melodies. ‘Ending Days serves the album and provides the melodic lines of the rhythm guitar and the highly refined solos. From the tonal melodies and emotive vocals, Paradise Lost uncovers their influences to rock music as well.

The keyboard-laden hooks on ‘Hope Dies Young’ are weighted by a gloomy atmosphere and crooning vocal verses. ‘Obsidian‘ also has many tempo changes and it shows how the range of the composition can be extended and boosted by the song’s dynamics.

From the start of the album, I hoped the band would feature some slow, lumbering riffs. Yet the harsher and heavier track that features these ominous qualities is found on the grand album closer, ‘Ravenghast’. Its layered guitars and dark haunting keyboards are paired with the slow grim dirges of foreboding death/doom metal as they reverberate endlessly. Between the bleakness of the gloomy growls and the fine performance of the potent dual guitars, Paradise Lost seal their 16th chapter leaving you overshadowed in eerie silence. ‘Obsidian‘ includes two bonus tracks ‘Hear The Night‘ and ‘Defiler’: they both emphasize the obscure growls and they’re masterfully designed to bring a dark and grim majesty until the last moment.