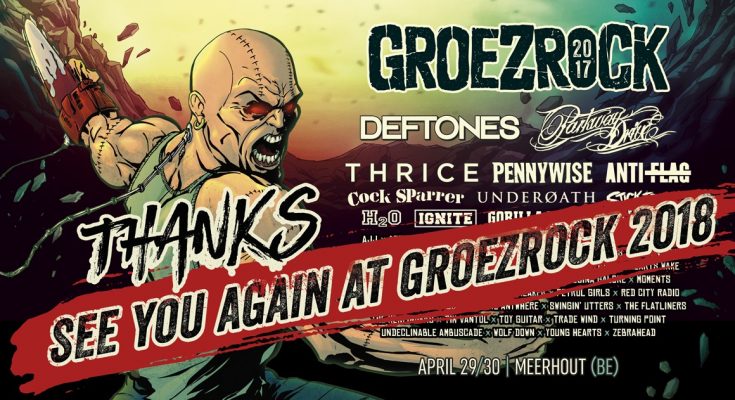 On the last weekend of April 2017, Groezrock took place at Meerhout, a town located in Antwerp (Belgium). Like told before in the preview, the weather left us hanging a bit .. and so did traffic a little. But that didn’t keep all the Punkrock/Hardcore lovers at home. By the time I arrived on Friday, a lot of people already were in the queue to enter the festival area and exited to be at home again. People from everywhere tagged along. The slow queue did not ruin the festival happiness, people grabbing beers, talking to strangers. This made the time go a little bit faster. Why did the queue go slow? Groezrock made the safety of people in the area a priority. By means of a lot of cops and security staff keeping their eyes open. People getting checked for drugs, weapons and other stuff that didn’t belong there. Everyone had a baggage check when entering but also a frisk. Every single time you got in, you had to go through the body check again. Think I got around 3 just to get my stuff from the car to the camp site. A bit too much for me on one day: “U Can’t touch this” from MC Hammer in my head all day long.

By the time I woke up from last evenings party, a lot of people had joined the early birds from Friday. Time to party! First in the line was Red City Radio , which I missed cause I was enjoying the atmosphere at the camp site too much.

The first for me to see was Clowns (Back To Basic Stage), only saw them like 10mins before heading to an interview. But damn so worth it! After 2 minutes standing in front of the stage, I almost had a combat shoe in my face, close one! Adrenaline enough in that short time.  They must be one of Australia’s loudest rock bands. Too bad I missed a lot off the show, but I was able to make it up with an interview with them later on. More to read about it on our website soon! 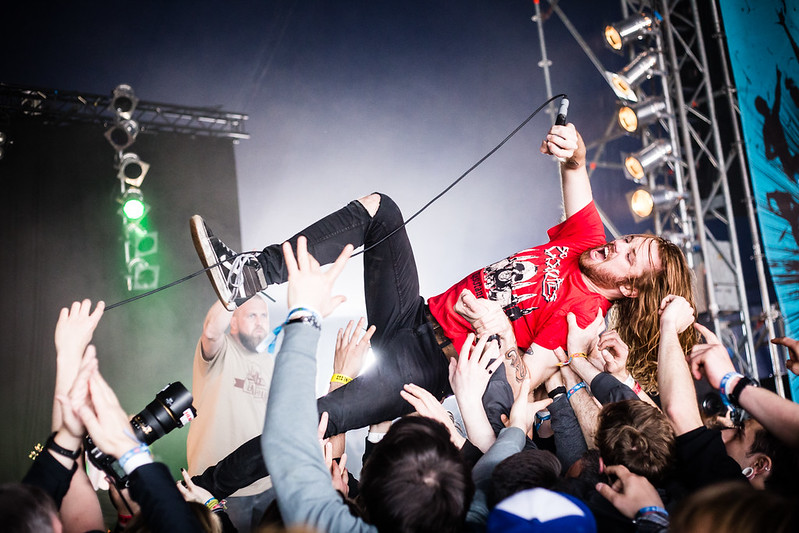 After all my interviews that day, I luckily have good friends that bring me some Jagermeïster too keep my cool.  That day for me was pretty much just hanging around, enjoying the festival. Besides that I went to see Stick To Your Guns (STYG) and In Hearts Wake. Interviews will coming online with these lovely men as well! STYG‘s fanbase is growing very fast, this hardcore band from Orange County (USA) filled a complete Back To Basic Stage. I had to stand outside not to get overwhelmed by people.

THE show for me was In Hearts Wake, an Australian metalcore band. They played on the Watch Out Stage and I should have watched out for the crocodile (Kevin) they bring on shows. Festivals stand for having fun and doing stupid things. Like crowd-surfing on a crocodile… and falling off. My back died there, but it didn’t keep me from going. Bruised and broken I continued to enjoy their show. Recently the band announced that Kevin (crocodile) has passed away, I will remember him forever.  You can see it in their eyes they love to play shows, they just love music with passion. I have a lot to say about these guys but will keep this for later when talking about the interview.

Recovering from this, I went to see Deftones for a bit. My focus was not with them, but with my poor back.  But for what I was able to see, the actual fans had a great time. And it was a good ending for that day of the festival. 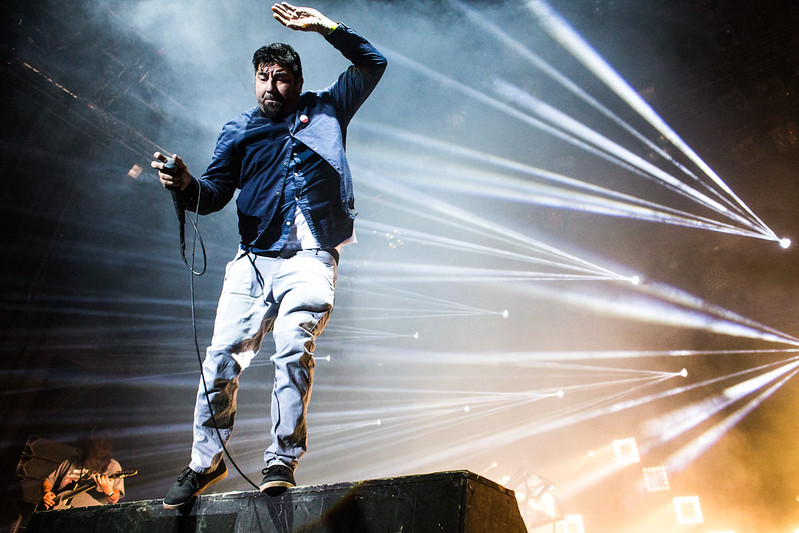 Or did it end? After party’s are always a good thing. We went to celebrate that day and went for a GRIMM Breakfast (Beer + Jagermeïster shot). Till 2 am you had the chance to party on the latest dance hits at the Jägermeister stand, after that the party continued at the 24h zone.

On Sunday we woke up with a nice temperature. People running around in shirts and shorts, all happy faces around the place. Even with a hangover, people managed to jump out of their tents and head to the festival area for the last day. Still broken from the day before, I got up and went to the festival area where I looked around for delicious food (Hmmm Bicky Burgers!). And oh Candy from ‘Just Like Your Mom‘.

Best show of the day was Parkway Drive, who headlined at the main stage. One of the biggest and most respected metalcore bands in the world. For the fourth time this band from Byron Bay played at Groezrock. By the evening it got colder, and a delicious cold cocktail did not really help. But Parkway Drive heated up the place! My first thoughts: “Damn is this a Rammstein show?” 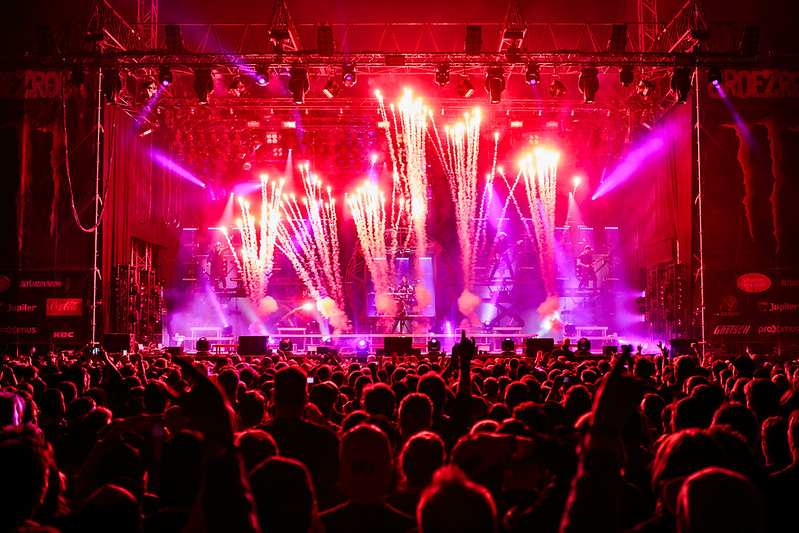 But no! BAM Fire away! I think one of the best shows I have ever seen of these guys. Bands like this don’t need words, you need to feel it. Ben (drummer) performed an amazing drum solo in a rotating cage. People really loved it! They know how to put a drummer in the spotlight!

I’m ready for next year 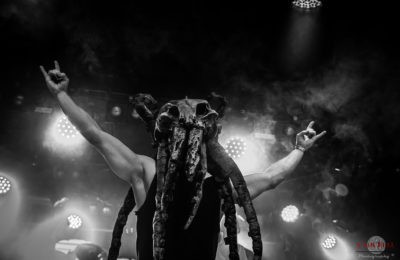 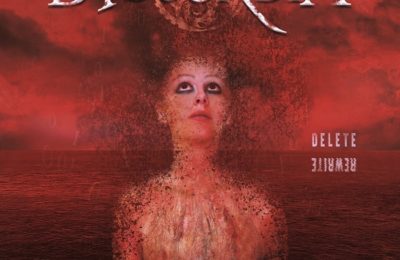