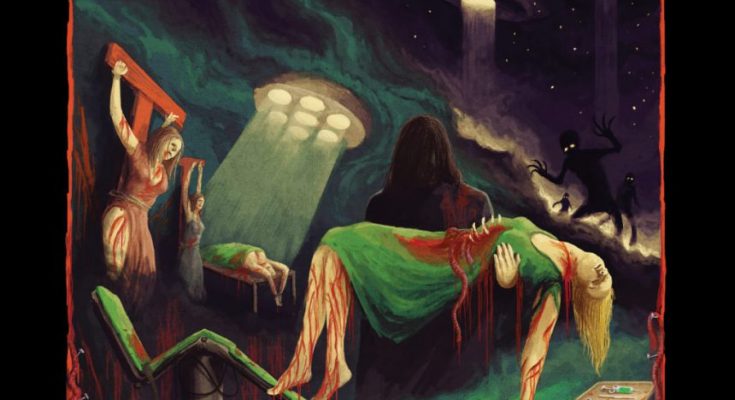 Alright then, I think it has been 8 to 9 years since the last time I wrote a review of a death metal album… or any album actually. I used to have a very small based “webzine” on Myspace (that’s right, Myspace) called ‘SABBATICAL METALUCINFERNAL GOATHRASHING WEBZINE’, reviewing and interviewing only the underground and the “true”. Back in those days anything not black/death/thrash or grind was poser material or not worth mentioning. MAN I am so happy that I grew out of that phase!! I guess I missed those reviewing days though so… here I am joining the GRIMM team! Thanks tons by the way! Anyway, for my first review the GRIMM editor team gave me 4 options. I went for the most brutal one, bad habits die hard I guess.

It makes me very happy that certain bands can still make the hairs on the back of my neck stand up. Face it, these days it’s very hard being any different from other bands, a lot of bands doing the same thing that has been done hundreds of times before. But hey, you don’t hear me complaining about that fact: FUCK being original! Whatever happened to good old honest brutal blistering death fucking metal?  I’ll tell you EXACTLY where to find it: these fucking guys…

Out of Delaware US hails a venomous war machine, puking horror themed death metal all over this world gone mad since 2015. The name is Scorched and that is exactly how your speakers will feel like after raging their blasphemous noise through them. Scorched have that “where-have-you-been-all-my-fucking-life” kind of vibe when you listen to them for the first time, that is if you are a full-blown, hard-hittin’, diehard death metal head (guilty). I took the liberty of going through their previous releases before listening ‘Ecliptic Butchery’ and… I fell in love. I believe the best way of describing them is the perfect blend between SKINLESS, AUTOPSY and DISASTROUS MURMUR (“Rhapsodies in Red” era, a firm classic btw!!), but that’s just me thinking out loud.

‘Ecliptic Butchery’ is not very different from their former stuff, and that’s NOT a bad thing. They keep on blasting their kind of bloating old school death metal, but ALL songs have their own story. They are completed with utter brutality and will make you want to bang your head until your neck breaks, and then bang it some more so that the broken bones will split up your fucking throat! Straight from the start of the album they bring you right into the mood, what an earthquake! Time to clench your fist and FUCK SHIT UP! After a 50 second intro (that could easily be a soundtrack of any 80’s horror flick) it’s one hell of a ride. The vocals are guttural, the guitars are slammin’, the bass is grooving and the drums are skull-pounding… very heavy stuff. This is definitely a must have for your death metal collection! It’s already a classic! If I have to say one ‘bad’ thing about this release, I don’t like the cover artwork, but that’s just personal taste. Keep an eye out for this band!  They are already conquering! And be sure to check out their former releases… GNARLY!