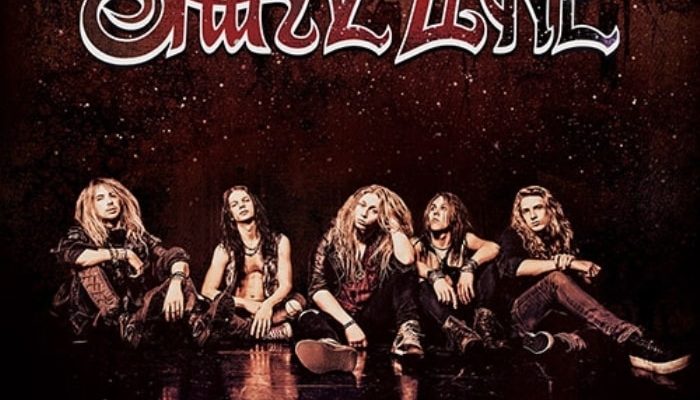 Shiraz Lane is a young and upcoming Finnish hard rock/glam rock band with a hunger for good music. They’ve been working the underground scene in Helsinki and beyond hard and now have their first full release For Crying Out Loud to win more rockers for their mission. And that mission is one of peace and love around the world, which is a refreshing aproach to the usually party filled glam rock. In our interview with them in Helsinki some time ago, they assured us though that there’s still a healthy piece of partying, but that they indeed want to bring a certain message across.

They’re huge fans of bands like Guns ‘n’ Roses, Led Zeppelin and Skid Row and that’s exactly what you get from them musically. The songs have that really old school hard rock feel with a touch of the new. I’m pretty sure that whenever you can catch them live, they’ll be able to get young and old moving to their music. Strong riffs and bass lines that sort of bring up a feeling of familiarity but still have their own character, combined with really nice drum work and a set of impressive vocals. Those vocals, belted out by Hannes Kett, are a combination of formentioned bands’ vocalists and just fit the music perfectly.

Opening track Wake Up lives up to its name and seems to want to rattle your bones with a healthy dose of hard rock. Besides that Hannes tries to put you to thinking about stuff that is going on in this world, in other words: he wants to wake you up and see what’s wrong and right. A big message without being too pushy or dramatic about it… great to see that there are young people still fighting the good fight.

In Momma’s Boy they pick a fight with those guys we know all too well who make a lot of noise but don’t have any content to back it. They’re telling those people that are full of shit, being too high on their egos and being a dick to hide insecurities to go home, back to their mommies. And the song is of course yet again a great hard rock song amongst many.

In some of their slower songs they show a great feel for bluesy music. Quite often the music and vocals remind me a little bit of one of those big hard rock legends: Led Zeppelin! Prime examples of these songs are Same Ol’ Blues, Behind The 8-Ball and Bleeding.

Ana: … it’s like we get trapped to our own visions and our own ideas. We’re living in a bubble, you know.
Hannes: Yeah, we’re slaves to everything, we’re slaves to our minds.
Ana: We’re slaves to the system that tries to control our minds.
Hannes: Yeah, I don’t know, it sounds really silly. But that’s just how it is. There’s an illusion of freedom. We get to choose which idiot to put somewhere, we get to choose this and that. But actually we don’t get to choose anything, we don’t get to do anything…
Ana: Yeah, pretty much with the Mental Slavery song we wanted to put those things up in the music video. And it kinda ended up remaining unsolved, the story in the first music video. So we wanted to continue the story with the For Crying Out Loud music video, in which Hannes, who is this mentally ill character gets in a way freed from all the shackles.
Hannes: And the lyrics in that song are different. They’re like “stand up my brothers and sisters, you got the fire in you. Don’t be slaves anymore!”.

Last song (besides the bonus tracks) M.L.N.W. could perfectly fit in that sixties and seventies flower power period. Not only the music sounds very “vintage” with guitars that sometimes make me think of The Who, also the lyrics would be a perfect match. M.L.N.W. stand for the line they keep on repeating in the chorus: “Make Love Not War”. Again, they bring a message of peace and love for our often torn up world. Hannes‘ singing goes pretty high from time to time. If the lyrics would’ve been different, the song could’ve been on a release by The Darkness!

This is a great debut album by a young band that shows a lots of potential and maturity in their music. Check out their songs and keep an eye out for them, I think Shiraz Lane could go big with enough time and effort. They have the opportunity to convince people all around Europe live as the support band for the Lordi tour (for dates go here). Go see them on stage, the chemistry and stage pressence will draw you in if you’re not convinced about them yet. 8/10 for peace, love and rock ‘n’ roll!