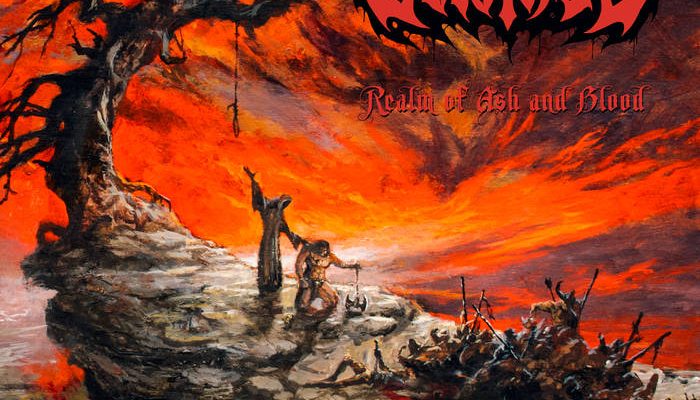 Since the early 90s Finland became a hotbed of obscure death/doom metal bands. The land of thousand lakes brought many influential acts such as Sentenced, Demilich, Convulse, Demigod, and many more. These original bands embodied a signature style that shaped a firm foundation for the Finnish underground metal scene. In terms of characteristic sounds, these attributes and qualities largely defined the old school style of the Finnish death metal. Almost one year ago 20 Buck Spin released the first album of the U.S. death/doom metal band Ossuarium. With the aim to promote one of its heavyweight contenders for the year 2020, 20 Buck Spin unleashes the third album of the Finnish death/doom band Solothus.

‘Realm of Ash and Blood is a gloomy record drenched in heavy crushing riffs of authentic death/doom metal style. Between the years 2013-2016 Solothus released two albums where they earned a deserving momentum. Their newest release is yet another overwhelming experience of how death/doom music can be bleak and sorrowful. As dark and putrid as it can be, the album opens with ‘Father of Sickness‘ which is a slow and dreary march towards the realm of desolation. The guitars depict a horrifying atmosphere with reverb-drenched vocals and doom-laden riffs. Solothus creates a massive sound. The presentation of the rhythm guitar and the emphasis on mid-tempo is achieved by the quality of the musicianship. While it’s not all doom and gloom the following track ‘The Watcher ‘ is fulfilled by the rhythmic melodies.

Drawing influences from other old school acts such as Convulse the guitars are crunchy and seemingly powerful. The vocals emitting shrieks and low guttural growls sound harsh and deep. Whilst the interplay between the crushing riffs and hypnotic melodies are combined with the massive pounding drums, the guitar arrangements are set to create a sense of uncanny melodies that you won’t hear them elsewhere.

‘The Gallows Promise‘ is filled with these qualities where the guitars provide an eerie and dismal melody. Solothus‘ take on death/doom is quite similar to bands such as Hooded Menace. The musical template seems fixated at mid-tempo and it’s precisely where the guitars drip with gloomy quality. The tracks seem a perfect fit for slow dirges but there are moments when the drums reverberation echoes loudly. The strong effect of the double bass and the guitar chords are followed by powerful strikes of the crushing drums. Solothus blends their dark melodies and rhythm so that they are not clearly distinguishable from another. The vocalization mainly emits the guttural growls and they would tremble the ground beneath you.

‘Realm of Ash and Blood‘ is a visceral and old school death/doom album heavily influenced by Convulse‘s debut album ‘World without God‘. The music here channels the early gems of the Finnish death and doom metal. By the compelling atmospheric feel of the seven tracks, this suggests that Solothus made some modifications to their melodies. For this reason, the album sounds accessible with its musical patterns and monolithic song structure. The flexible and sleek transition from the crushing death doom pace of third track ‘The Gallows Promise‘ is where the song leads to a beautiful yet soothing instrumental interlude ‘Last Breath’. It defines the skills and the dexterous performance of the Finnish quintet.

Among the lines of the contemporary death/doom metal bands such as Ossuarium, Mortiferum, and Krypts, Solothus effectively and intellectually ascends to the top list to befit among these bands. ‘Realm of Ash and Blood’ is a mind-blowing record, the album is stuffed with staggering amounts of lead guitars. While the heaviest of all the riffs are included on ‘Below Black Waters‘. The crawling riffs and the crushing tempo of the drums bring more diversity to this track. The strong atmospheric effect of the growls and the surmounting solos demonstrates the proficiency of the band. ‘Chasm of Shattered Blood’ is perfected by the crushing percussion and melodies interweaved with the solos.

‘Realm of Ash and Blood‘ is orchestrated to have enough diversity among the songs. The final epic track ‘A Rain of Ash’ is heavy and mid-paced. On this track, Solothus combines the quality of the mystifying melodies accomplished by the sophisticated lead guitar. The guitars create a slow and doomy passage where later it contrasts with the shredding solos and the thundering drums. This is without a doubt one of the best death/doom albums and one of the strongest releases of 2020. Solothus released a staggering album and it’s very close to the level of a masterpiece, recommend for fans of Convulse, Krypts, and Rippikoulu. 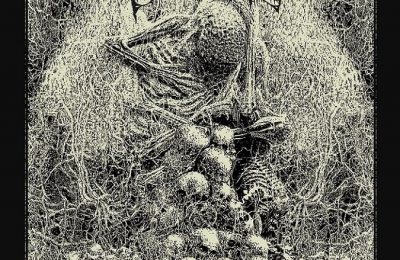 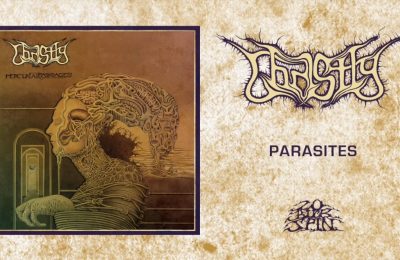