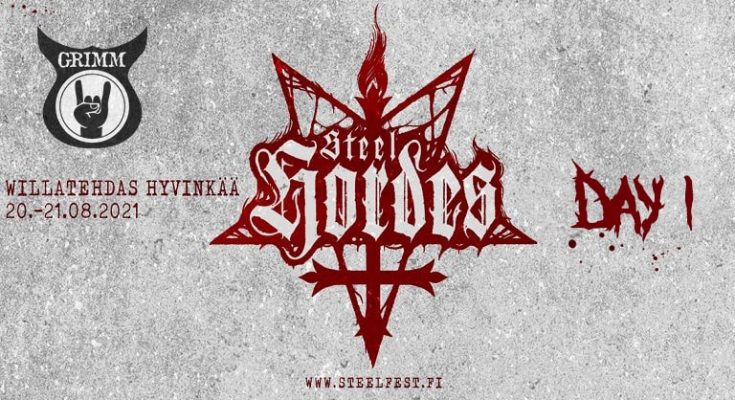 I was personally looking forward to the promised release show of the blackened speed metallers of Bonehunters. Sadly, they had to cancel last minute. The SteelFest Commander however managed to catch a worthy replacement: the Hyvinkää native atmospheric black metal outfit Kalmankantaja, who released no less than 5 albums in the past year and a half with a 6th on the way for a September release! In the blazing sun, the blood-splattered band adequately managed to bring a touch of darkness to us. Especially vocalist Tyrant managed to bring across a menacing presence, his blood-soaked face more often than not hidden in the deep hood of his black robe and bandaged, bloody hands. They immediately set the tone for what was going to be 2 days of underground music of the highest quality and we can’t wait to see them again on a stage, most likely at one of the SteelFest ran events.

Going in a somewhat different direction, the next outfit to take over the stage was the one man project Warmoon Lord. They recently highly impressed us with their sophomore release ‘Battlespells‘ (for our review go here), which brought us old school epic symphonic black metal with strongly battle-centered themes. Quite fittingly so, the live band appeared on stage in full-on signature black metal battle gear ranging from pieces of medieval looking armor to capes and of course a whole bunch of spikes, studs and leather. While some might find their appearance laughable with the (dark) D&D-like outfits and old school corpse-painted faces, their performance was nothing of the sort. They put down what was basically a masterclass in Emperor-esque fantastical symphonic black metal and impressed us highly with a solid show. While Lord Vrăjitor is the sole member of the outfit, his stage presence was rather understated, seemingly focusing on his music doing the talking, while the show was somewhat stolen by the often hunched and wide-eyed vocalist for the occasion and live drummer Revenant, who was acting like an animal behind his kit. A highly enjoyable show that I wouldn’t mind catching again, but maybe next time indoors.

The only death metal act of the day appeared under the form of Lie In Ruins, who left a positive impression with last year’s release ‘Floating in Timeless Streams’ (for the review go here). While in its core they are clearly death metal, they more often than not veer into the direction of the signature Finnish death/doom sound and the often dissonant sound also brings in a blackened touch, making them not stick out among the other shows one bit. Featuring members of other highly valued black and death bands like Cataleptic, Corpsessed, Cryptborn, Desolate Shrine, Lord of Pagathorn and Perdition Winds (set for an appearance the next day), we didn’t expect anything less than a damn solid show. And that’s exactly what we got. Going from Roni Ä. crushing it with some stellar guitar riffs and solos, to vocalist/bassist Roni S. bringing a classic old school death metal growl and second guitarist Tuomas K. adding a demonic touch with his Nifelheim-inspired facepaint and creepy as fuck wide-eyed stares while belting out some serious growls. A show perfectly placed in the middle of all the black metal violence of this day.

Originally the solo project by quite legendary Finnish black metal musician Shatraug, Sargeist has grown out to being one of the staples of the Finnish black metal scene. Every single show you catch of theirs feels like a Satanistic/occult ritual and brings somewhat of a sense of danger with it. Vocalist Profundus has a towering stage presence as if he has a bunch of rage within himself, ready to unleash hell and fury upon anyone who asked for it. The started with him marching back and forth on stage, only halting shortly to swing a chain censer around, basking the other band members in incense smoke. Profundus snarled and growled his lines, Shatraug was his usual stoic self and VJS, the other guitarist, seemed to have stepped away from this realm, completely engulfed in the ongoing ritual. Sadly, after the first track there were some technical issues that took some time to get fixed, making Profundus seemingly get really restless while the SteelHordes crew was running around to try and get things fixed asap. As soon as that happened, Sargeist burst back into full-on blasting us with their dark music and we were all too glad to be at the receiving end.

The headliner for the first day was supposed to be the one and only Destruction (and only non Finnish band), but due to unfortunate circumstances, they also had to cancel. The SteelFest Commander surprised us with Havukruunu as the replacement, though no complaints from me! Last year’s ‘Uinuos syömein sota’ was one of the releases of the year for me and as sort of a next generation Moonsorrow, they’re always a pleasure to catch live. And they did not disappoint one bit! Every time I see them taking over a stage, they seem to have stepped it up again a couple of notches. The vocal harmonies coming from these guys were even live simply on point and combined with the aggressive harsh vocals and often atmospheric feeling riffage, it’s clear that Havukruunu is shaping up to be yet another highly popular pagan inspired export product from Finland. Throw in the energetic and passionate stage presence and skillful musicianship of all 4 of the guys and you can see why they were actually a fitting replacement as the headliner for this event, despite them being rather on the young side as a band. Havukruunu, an underground band that is slowly emerging into the realms of more well-known bands and definitely someone to keep your eyes on!

For more pics of day 1, go check out the photo report here.