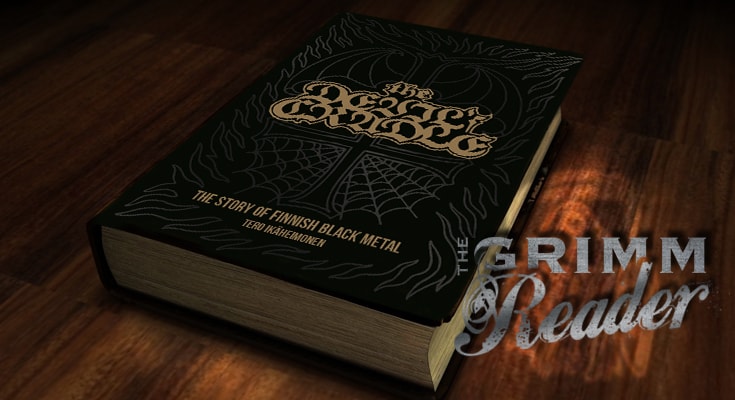 Usually, when people think about black metal, the obvious countries are Norway and Sweden. But those who are properly submerged into the dark realms of the genre, know that Finland has an at least as valuable and interesting black metal scene. Compared to its neighbors, Finnish black metal often seemed to shy away from the Norwegian black metal sound completely or even go completely against it. Right now, the Finnish black metal scene is still mostly steeped in obscurity and underground atmospheres, by doing their own independent thing and never really striving or aiming for the music charts. It’s a treasure grove of raw, brutal and imaginative uniqueness and is sadly often somewhat overlooked.

We had a clear focus: to be the world’s most brutal band. (Nuclear Holocausto Vengeance – Beherit)

With ‘The Devil’s Cradle’, the writer seems to want to somewhat resolve this. Through loads of interviews with people who stood at the cradle of the Finnish black metal scene from outfits like Beherit, Archgoat and Barathrum, and those who were part of the explosion of the black metal sound in their country like Horna, Impaled Nazarene, Thy Serpent and …and Oceans, to artists that are putting the bar even higher or continue the “Trve Kvlt” vibe like Satanic Warmaster, Ride for Revenge and Saturnian Mist, you get a pretty thorough overview of the history of black metal in Finland and its special character.

We’ve always done what we please. Especially if you begin to advise us, you can be quite sure that it is done just in the opposite way. (Mika Luttinen – Impaled Nazarene)

Overall, the book is a very pleasant and smooth read, especially for those who are music buffs and are interested in how things were in the beginnings and how it all developed in what it is now. There are really interesting chapters about some of the more prolific Finnish artists that really suck you in, but at the same time also a couple that are somewhat forgettable or maybe not as impressive as the rest. It still doesn’t take away from the good read. And somehow the book manages to depict the history of Finnish black metal really well despite every chapter being dedicated to only one band at a time. In between you can find parts about certain events, areas or specific groups within the scene like the Hyvinkää scene, national socialism or the somewhat silly (and failed) attempt at mimicking the illustrious Norwegian church burnings.

This is simply a great book to learn about an often overlooked part of the black metal scene and will introduce you to bands you might have never heard about before. Highly recommended read for anyone with the slightest interest in black metal, music history and its relevance to this day still. And if it really speaks to you and you want to experience the rebellious and individuality-centered scene that is the Finnish black metal scene, you have to get to Steelfest Open Air in Hyvinkää or its smaller cousin Steelchaos. Because there you can truly feel what it was and still is all about and of course catch a proper selection of its instigators and future bands live. Check here for our archives of both festivals: Steelfest and Steelchaos.

One thought on “The GRIMM Reader: The Devil’s Cradle”