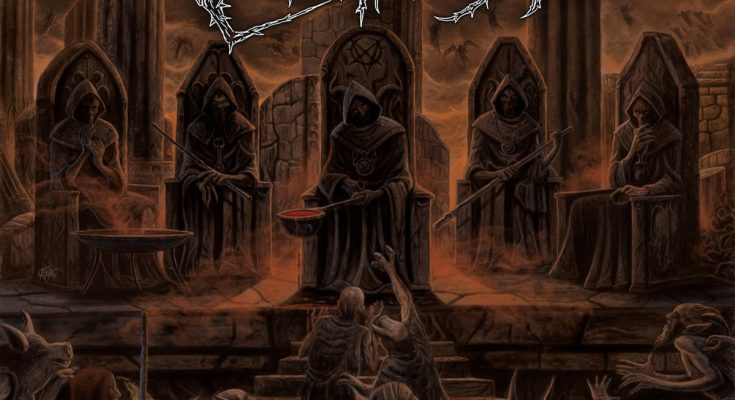 The Greek black metal spectacle is based on three mainstays which are considered to be the true fundaments of Hellenic black metal that formed in late 80’s starting with Rotting Christ, Necromentia and Varathron. The legacy of Varathron has been present for almost three decades, being one of the leading acts to rise from Greece. Their first album His Majesty at the Swamp along with Rotting Christ’s Thy Mighty Contract and Necromantia’s debut album Crossing the Fiery Path were instant classics of conventional black metal albums. With their sixth instalment entitled Patriarchs of Evil, the Greek cult masters of black metal have returned to their roots. The newest material is consisting of many fused elements shaped with complex song writing and performance. Varathron is generally classified within the underground metal with strong reminiscence to the second wave of black metal. The album launches with a firm opening Tenebrous that can be summarized as melodic folk black metal track, and has a lot of similarities to Rotting Christ’s latest albums such as Theogonia, mainly in the riffing style. Stefan Necroabyssious gives a stellar performance on this album, the riffs are layered with catchy melodies and refreshing aggression of raw black metal.

Luciferian Mystical Awakening is one of the catchiest songs on the album drawing its similarities with the previous album Un-trodden Corridors of Hades where the dark atmosphere of the keyboards pervades. The epic parts outline the song structure and the use of acoustic guitars adds a catchy element. The  composition is brimmed with a large amount of energy, there is a lot of dark atmosphere and cascading melodies that gives the new track a superb feeling. The Greek veterans have long experience in making great music, therefore their newest album is combined with many symphonic passages. The song arrangements have an organic vibe to them, every instrument sounds vibrant including the bass lines.

Saturnian Sect is enriched with Mediterranean melodies and dramatic themes, the dual guitars are charged with powerful riffs and organic drums, converting from mid pace to thunderous blast beats. The use of acoustic guitars identifies the bands technique in expanding their sound. The new album includes eight tracks, having a variety of styles, from  the old school melodies to thrash metal riffs. Remnants of the Dark Testament acts as mystical tale of occult, the soaring synth builds naturally with the heavy riffs. Varathron’s cinematic castings have never been this tremendous, the choir ebbs and flows with dark passion. The Greek mythology is a perfect source for bands to find their inspiration from, bands such Septic Flesh and Varathron show lot of interest to these mystic tales and stories from Ancient Greece. Hellwitch (Witches Gathering) is a melodic tune imbued with the classics of 90’s melodic death metal.

Orgasmic Nightmares of the Arch Desecrator ignites with blast beats and focal synths, the tremolo pickings creates a dark aura, the guitar lines are layered skillfully while the vocals are of ominous snarls. The final track Ouroboros Dweller (The Dweller of Barathrum) initiates with magical acoustic guitars where the synth creates a majestic atmosphere balanced with heavy guitar riffs. Stefan Necroabyssious low pitched vocals are perfectly fitting with such harmonic vibes. The ingenuity of the drums such as martial drums and choirs are chromatically scaled. Patriarchs of Evil is a great follow up album to their previous offering, and Varathron have found the right balance of mixing folk melodies with raw black metal, proving that those Greek masters are full of wits and creativity!!!!