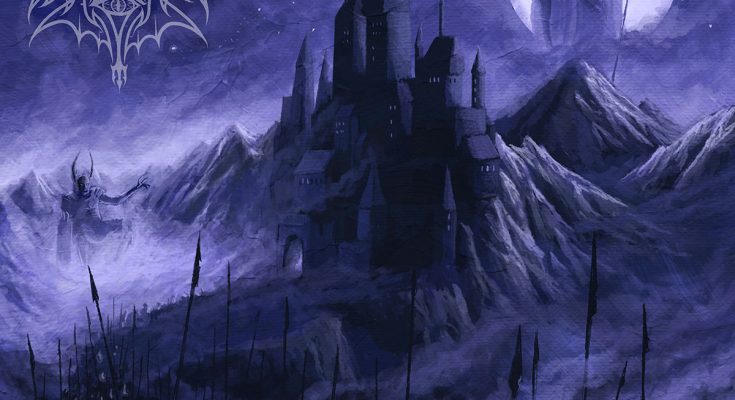 Rising from the cold regions of Finland Vargrav once again returns with the sophomore album entitled “Reign in Supreme Darkness”. Seemingly the new album explores deeply into the medieval and symphonic soundscapes of early black metal. The Finnish black metal scene in general is known of its raw black metal sound, as there are very few symphonic bands that play this kind of style. Vargrav currently offers a new presentation to the Finnish underground metal scene. On the new album the multi-instrumentalist V-Khaoz derives his musical influences from the likes of Emperor classics In the Night Side Eclipse and Anthems to the Welkin at Dusk.

Reign in Supreme Darkness was composed by a professional musician who is cognizant of the true fundamentals of the second wave of black metal music. The first glimpse at the cover album will remind you of many cover arts from bands such Limbonic Art’s debut Moon in the Scorpio. The album begins with Intro – Et in Profundis Mysteriis Operta, a beautiful and cinematic orchestral arrangement which sets an epic and gloomy theme to the album. This is more of a majestic piece that builds on a haunting musical fantasy. The second track The Glory of Eternal Night is graced with an opulent touch of majesty. If you listen closely to Reign in Supreme Darkness you will notice the nuance of atmosphere and direction in sound quality.

The eight majestic cuts will transport you into the medieval and the magical realm of darkness. The guitar and the symphonies creates a dim aura as each moment grows darker by the enthralling symphonies. The force of darkness manifests into a majestic heights through the swaying tremolo pickings that intensifies the atmosphere. The high pitched rasps that utters dark and mysterious poetries, where altogether they form an exquisite symphony.

On Dark Space Dominion the mastery of the synth work mingles into the densely packed layers that creates a bombastic atmosphere. Enclosed with dark and ambient passages of the 90’s Nordic beauty. Reign in Supreme Darkness combines the black metal riffs and scathing tremolos which makes this album even more superior than the predecessor. Yet there is an outstanding balance between the guitar sections, drums and the atmospheric synth as they all coalesce into one mass of symphonic black metal majesty.

In Streams from Great Mysteries is composed of rich textures and dark elements, there are many moments where the album brings the early albums of Emperor to my mind. Guitar provides the raw sound of the 90’s black metal, the aesthetic beauty of the sophomore lays in the excellent performance of the instrumentation.

The fifth track As Shadows Grow Silent sounds closer to Emperor’s Wrath of the Tyrant track which appeared on the split album Hordanes Land with Enslaved. Reign in Supreme Darkness is brilliantly crafted, the air of mystery which surrounds the tracks correlates with the classic black metal albums. The scourging tremolo pickings, and the raging blast beats ultimately transforms the mid tempo into faster parts.

The symphonies are omnipresence and they are dark and ominous. There are a few ambient passages that add more to the musical texture, V-Khoaz vocals are grim and vicious. You will hear some mysterious interplay between the weaving symphonies and excellent guitar riffs. The drums act accordingly to the cadence, blistering with velocity. The frosty tremolos are overwhelmingly sharp and reverberate through the entire album. The beauty of melodies shines on the Crowned by Demon storms, the track is steered by the powerful guitar riffs and the sublimity of the synth work.

On Godless Pandemonium the swirling tremolo and synth intertwines and creates a haunting crescendo. The shrieking vocals drift and the drums shows an excellent transitions from mid pacing to blizzard blast beats. Closing track Arcane Stargazer is the most lengthy and epic track launched by the cold icy tremolo riffs that cuts through the dark soundscapes. This is a masterpiece album that can surely withstand through time and space. In the age of the third wave of black metal Vargrav proves once again that the roots of the 90’s era are still unbeaten. This is one of the best symphonic black metal albums of the year 2019.