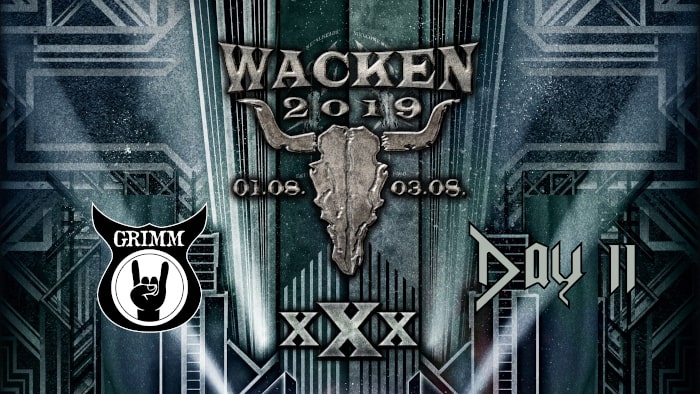 A female fronted symphonic metal band with Jennifer Haben. Very pleasant to hear and watch. The band opened up with In ‘The Shadows’. A perfect song to get the crowd going. There is a very sweet combination between the drum and bass on the song ‘Lost in Forever’. For the song ‘Heaven in Hell’ there is a special guest Tina Guo. She brought us some electric cello solo before we kicked of with another heavier song. If you like a female symphonic voice you should definitely give Beyond The Black a chance. Jennifer really has an angelic voice. The show ended with the song ‘Hallelujah’ which contains an epic guitar solo.

A band from my home country. This band is so dark it sucks out everything that is left of your soul. We have to say their name becomes more popular every gig they play. It is not a surprise because the band has a lot of experience from Amenra and Oathbreaker on stage. The set opened with a little song called ‘Svanesang’. Even though the set was played during day time they played the sun away and dragged us into darkness. They certainly are a very good Black Metal band from Belgium. Further songs that were found in the setlist was the trilogy songs ‘De doden hebben het goed’. They ended with screeching guitars on the number ‘Parool’. Which ended the darkness in the dome.

The American Thrash metal band we all have heard of before. There definitely is ‘More Than Meets the Eye’ to this band. Which in case was also the third number on the setlist. They look seasoned but believe me that is not necessarily bad. Powerful guitar riffs and a classic thrash sound. ‘Practice What You Preached’ was a highlight of this show. It then again is a famous number from them. The band came on and rocked Wacken from its foundations. The band is older than the festival but they ended the set with a blast from ‘The Formation of Damnation’.

We got the first projection of the new video clip from ‘Dominion’ as an opener. After the video the banner dropped and Hammerfall enetered the stage with the song ‘Legion’. Joacim Cans continued with the song ‘Hammer High’ an all popular number that cannot be missed from the setlist. Mister Pontus Norgren and Oscar Dronjak played an awesome solo. The show continued with songs like ‘Renegade’, ‘Blood Bound’, ‘One against the World’, ‘Last Man Standing’,… So many metalheads united it was really crowded. People are standing everywhere and the terrain was packed for these Power metal legends.

Surprising enough a second band joined on stage: HammerFolk. They played with Hammerfall before. They exist out of an acoustic guitar and two Nyckelharpa’s. After their acoustic version Hammerfall joined and together they played the ‘Game Of Thrones theme’. Followed by ‘(We Make) Sweden Rock’ and ‘Hearts on Fire’. It was an amazing show that I was glad I did not miss out. Everyone had a great time fans and musician. Definitely check them out next festival if you missed them.

This band is pure fun. The way this band makes people forget what is wrong in this world for a moment is amazing. They started out with a song called: ‘One Last Ale’. Guess again it was definitely not the last ale on this party that went down. They are a punk band that use a lot of Irish Pub and Celtic features. This gives a mix of pure awesomeness. They really got the crowd along their sides pretty easily. People were jumping and moshing everywhere.

They had a set from about eighteen songs and the most memorable are: ‘Bastards Back Home’, ‘The Captain’s Dead’, ‘Pilgrim on The Road’, ‘Ghost From the Barrow’ and ‘Join the Riot’. The whole show was amazing I absolutely love these Irish influences. They sure can show some bands how it should be done. Paddy and The Rats bring pure joy to the stage and that is what they did on the Wackinger stage.

Sabaton had there 20th anniversary show on both Faster and Harder stage. No band has ever used the two stages in 30 years of Wacken history. Personally this is the moment I had been looking forward too. The band started out on the Faster Stage. Which I did not expect so I waited on the wrong stage all day. They blasted out with their opener ‘Ghost Division’. Screaming guitars and a wild crowd singing along. By the fourth song they brought out there first surprise Thobbe Englund who played along on ‘Fields of Verdun’ and ‘Shiroyama’. Another highlight to hear was ‘The Red Baron’ from there new album. After 10 songs Pãr comes out to the Harder stage with an emotional speech.  The speech was about the beginning of the band and how they struggled and overcome to achieve where they are now.

After the speech Pãr invited almost the whole family on stage. On the Faster stage we now had: Joakim Brodén, Chris Rörland, Hannes Van Dahl and Tommy Johansson. On the Harder stage we had: Pãr Sundström, Thorbjörn Englund, Rikard Sundén, Daniel Mullback and Daniel Mÿhr.

For me this was worth it waiting the whole day at this stage. Seeing all these former band members reunite and play. The hits went on ‘40:1’,’ The Last Stand’, … When suddenly Hannes and Daniel had an epic drum solo fully synchronized. The show went on and we started with the encores. One more musician joined on stage. And let us be fair among the bearded long haired men this beautiful woman was a nice touch. Dressed out in the same camo pants and a personalised Sabaton shirt the talented Cellist Tina Guo joined on stage. The last two songs that were played are ‘Swedish Pagans’ and ‘To Hell and Back’. So the show ended with fireworks and it certainly was a blast to attend.