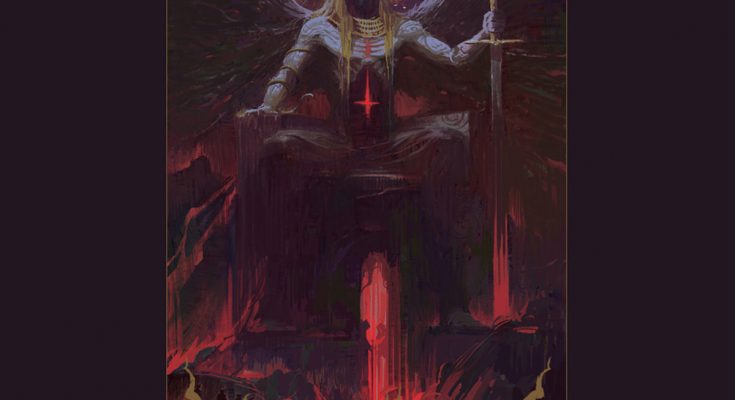 Yoth Iria is a newcomer in the Greek underground black metal scene. Founded by Jim Mutilator, ex-member of Rotting Christ and Varathorn. Mutilator took part in laying the fundamentals for the Greek black metal music and appeared on three of the Rotting Christ‘s classic albums: ‘Thy Mighty Contract‘, ‘Non-Serviam‘, and ‘Triarchy of the Lost Lovers‘. The hallmarks of his work as a bass guitar player on Varathron‘s debut album ‘His Majesty at the Swamp‘ was recognizable due to his exquisite performance, as well as other Greek musicians’ such as Sakis Tolis (Rotting Christ), Stefan Necroabyssious (Varathron) and Magus Wampyr Daoloth (Necromantia).

Mutilator played an essential role in building the stylistic method for Greek black metal. Now after a quarter-century, the Greek veteran is back with a new band. Yoth Iria’s lineup includes some well-known musicians such as Magus of Necromantia (vocals), George Emmanuelle ex-member of Rotting Christ (guitar), J.V. Maelstorm (drums) and John Patsouris (Keys). The new E.P. ‘Under His Sway‘ rather reformulates the traditional sound of Greek black metal.

Album opener ‘Under His Sway‘ conjures the melodic aesthetics of bands such as Rotting Christ. As it evokes the pomposity and the heritage of melodic black metal, the guitars are set with vibrant rhythm and powerful melodies. The classic sense of Hellenic black metal reverberations manifests itself. The song evolves into a ritualistic choir dominated by sharp guitar riffs, each line consistently bringing back to mind Hellenic melodies, while the dynamic elements are professionally arranged. Yoth Iria has an effective way of cementing their sound.

The following track ‘Sid Ed Jinn‘ opens with heavy riffs. Guitars build thick layer upon layer of sludgy doom metal. Melodies are soaked with mid-eastern elements while the majestic choir sets a gloomy atmosphere. Powerful guitar chugs provide the depth for this thrilling track, while the effect of the guitars raise the tempo. In a pompous manner the ritualistic choir becomes the most dominating piece of this track. The oscillating tempo shifts between a faster paced and mid-paced, the E.P. is full of bombastic melodies and catchy rhythm. Every element interacts with the other from staggering and powerful melodies to the raspy quality of the vocals.

The philosophy of Greek black metal style is implemented by raging mid-tempo. Whilst lead guitars and tremolo picking will refresh your memory. The enormous sound production boosts the dynamics of the music, and in terms of sound quality, the E.P. has a modern tone. Considering the melodies, they enhance the atmosphere yet the strength of the musicianship lays within riff violence, kinetic drums, and even in bass guitar. The music is focused on a modernistic style of black metal, and it’s mostly aligned to the contemporary style of Rotting Christ.

Mastermind Mutilator eschews the blind imitation, in fact, Yoth Iria is characterized by virtuoso and musical variations. Therefore the musical ideology on the debut E.P. is considerably innovative and fresh.

But despite the attributive style ‘Under His Sway‘ also includes one of the finest cover songs of Rotting Christ. After all, it seems that the old roots can never be forgotten. ‘Visions of the Dead Lovers‘ was selected to be fully modified and to suit the style of the band. Unfortunately ‘Under His Sway‘ is a short E.P. clocking in at 17:00 mins, featuring two brand new songs that will give the fans a teaser of what to expect from the band when they return with a new album sometime in the near future.