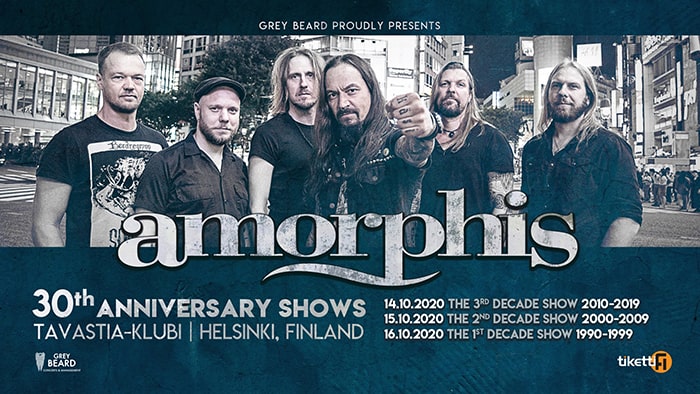 2020 was to be a celebration year for the popular Finnish metal band Amorphis. After 30 years they’ve amassed an impressive catalogue with 13 full-lengths, going through plenty of genres along the way. They set up to do a massive 3-day event at the legendary and historic rock temple Tavastia in Helsinki during which every evening would go over another decade of their career. This was going to attract most likely fans from all over the world, but then the pandemic hit hard and those plans had to be postponed. After a great live stream show (read our report here) and waiting for a long time, they decided to still do their anniversary shows at Tavastia with a lot of precautions.

The amount of people allowed in at every show was very limited, so people could keep their distance as much as possible. This they somewhat balanced out by playing the same show twice every night. I decided to go for the second show during which they focused on songs from the second decade (2000-2009), since that was the period that me as a metalfan developed and got to know the band. I have to say that Tavastia did a tremendous job in letting these shows happen as safely as possible considering the situation. Every person present had to register with a barcode in case they had to track you down, people had to be either seated or standing in the cordoned off zones that could hold 12 people maximum per line and the venue asked everyone there to please put on a mask. Of all the shows I’ve been to in Finland since the pandemic struck, I haven’t felt as safe anywhere as I did at Tavastia. Keep up the good work!

Now back to the actual Amorphis (****) show. The Tavastia stage had been slightly extended to add some space since half of it was occupied by a sizeable platform for the drum kit and keyboards. The backdrop, front of the platform and the small platforms at the front were all adorned with artwork portraying the same sun from the 2006 ‘Eclipse’ album (and first full-length with Tomi Joutsen on vocals), taking us even visually back to the second decade. The band strolled on stage in what seemed to me like a very relaxed mood and simply kicked off with ‘Sampo’ from the more recent release of that decade, ‘Skyforger’. Immediately followed by ‘Majestic Beast’ from the same release. As usual, most of the band was rather on the static side, completely engulfed with playing their music to perfection and frontman Tomi pulled much of the attention to him with his flamboyant stage presence.

Bathed in lights coming from almost all sides, one time all blue/purple, the other time fully engulfed in red, they moved on to 2 tracks from ‘Eclipse’ with ‘Leaves Scar’ and ‘Brother Moon’. But not before Tomi took the time to thank the people that took the effort to come to the show and support the band in these difficult times. Not too surprisingly, he was incredibly thankful to be able to be on stage in front of a live crowd again, even in a somewhat weird setup. With ‘Alone’ and a semi-acoustic ‘Far From the Sun’, they moved to a more old school part of the Amorphis decade, though those where the only ones coming from albums pre-Joutsen era. In a way none too surprising to me that they opted to go for more songs from the albums that were written with Joutsen. They did play quite a couple of tracks that they haven’t played in a long time anymore and they obviously got the approval from the fans present, listening at the screams when they announced certain tracks like ‘Silver Bride’ or ‘Her Alone’.

The band was in good form, the setlist was solid even if it wasn’t all that surprising in the end and the atmosphere in the room was absolutely great despite the weird situation. Leaving Tavastia after this show, made me almost regret that I wouldn’t be able to go to the really old school set the next day where they would be playing the songs from their first decade as a band. Hope to see you again soon, Amorphis!