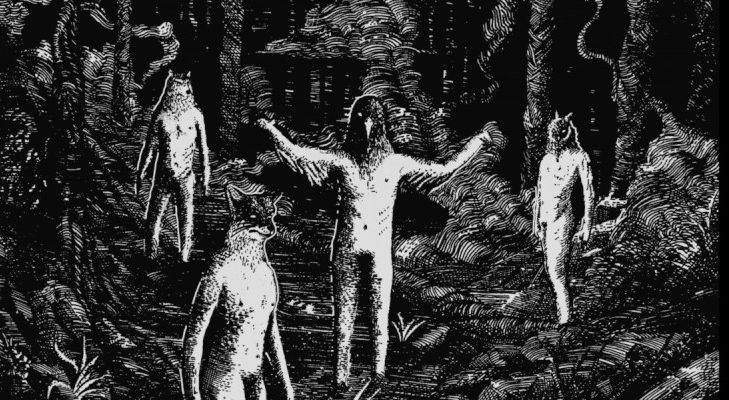 At the Shiraz Lane “Studio Retreat Party” (for the report go here) we discovered the Finnish rock band Blue Eyed Sons as their support band. We were very impressed by their music and their stage presence reminded us very much of the sixties and seventies rock sound. Bands like The Doors, Led Zeppelin and the like were never far from my mind. After the show I managed to have a talk with singer Joel Hellström to praise their show and he was so kind as to hand me their latest EP Animals (a.k.a. “London Sessions”). Always up for supporting a promising band, I put the disk in my laptop, cranked up the volume and was ready to dive into a trip to the past!

It’s always nice to see when an unsigned, DIY band puts in a lot of effort and care in their releases. The EP is in the typical carton board slipcase protected by a simple plastic cover, all in all it has a very finished look to me. Especially the stylish cover artwork by Jussi Pohjanen really brings the overall look up a notch with a black and white drawing of men with animal heads, leaving me very impressed by the looks of it alone.

Now how does it actually sound? Like the music of the bands I mentioned earlier, but on CD it sounds even more heavy than I expected. There are plenty of elements that give me the idea that they found quite some inspiration in the bands that brought the early heavy metal sounds in this world like Black Sabbath, Deep Purple and of course Led Zeppelin again. The fact that I bring Led Zeppelin up again, is because it seems a core element in Blue Eyed Sons‘ music. Especially the more than impressive vocals by Joel remind me more than once of Robert Plant. The release gets kicked off with the title track Animals which immediately puts down the bluesy groove combined with some heavy riffing that’ll make even a metalhead most likely nod his head. Besides rocking the hell out of you, you’ll catch yourself singing along to the line “love you like an animal”, proving how damn catchy their songs are.

Witches starts with a rumbling bass and kicks in even heavier than before. Of the three songs I think I can say this one is my favorite with the many switches from really heavy to a calmer more soulful sound with about halfway the song an atmospheric build-up where Joel takes out some of his more high pitched vocals evolving into a guitar solo and a cascade of pure eargasm vintage hard rock composition. Somehow the extremely funky and heavy groove even reminds me at moments of Rage Against The Machine/Audioslave‘s sound. Which shows that even if you strive for a more “vintage” sound, you can still make it sound modern as fuck. In Swan you get more of the same, but it just never gets boring with the shitload of hooks, incredible vocals, guitar solos and the rhythmic play between the bass and drums.

Our Finnish colleagues of the Imperiumi webzine have named Blue Eyed Sons “the best Finnish classic rock newcomer there is” and we wholeheartedly have to agree with that. They showcase on Animals their talent for groovy and catchy yet heavy rock that’ll be enjoyed by anyone who respects the sound of the good old days. I think that these guys will definitely make a name for themselves all across the world if they continue to deliver like this. I dare say that they could be seen as this generation’s Led Zeppelin in many ways. Check out their music for yourselves and if you can catch them live, they’re definitely worth your time…