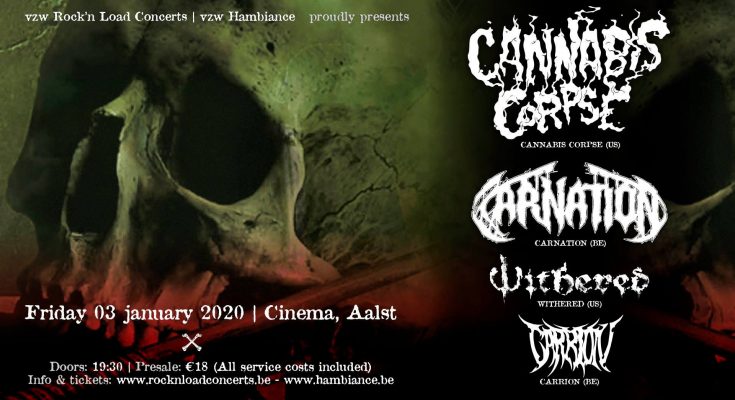 The Richmond death metal trio everyone was supposedly here for, switched spots with Carnation due to stage set up. There were a few technical issues and the overall sound wasn’t optimal but they made do with what they had. Cannabis Corpse played a very varied set. Having quite a few full-lengths to their name, they could go back and forth in their discography. We only got treated to one or two songs off the latest ‘Nug So Vile‘, which I thought was a bit of a downer. But man, I never tire of hearing those weed-themed parodies of death metal classics.

It’s a shame they lost Ray Suhy though. I felt like Cannabis Corpse was missing a second guitarist, which would have given more body to their sound and make it more heavy on the whole. The most notable example is during solos, of which there are many. Something’s missing. Yet it’s not always disagreeable. It makes for a breezier sound, which fits their comedic aspect rather well. The crowd really dug the performance though, as by the fourth track the front row exploded into a friendly mosh pit. Singer Philip ‘Landphil’ Hall is a master entertainer, talking to us humorously during technical issues, getting us rowdy, requesting those horns, yells and fist pumps. He naturally knows how to work the crowd.

This was a fun set. A bit of an underwhelming performance for me personally but extra points for humor.

You’d think Cannabis Corpse was the band who enjoyed the largest turn-up, them coming from overseas and not performing here very often. But you’d be mistaken. As was I. When I entered the venue at the night’s start, I’d already started to notice most attendees were here for local heroes Carnation. The merch worn tonight almost exclusively indicated people were here for this band. A band that’s almost been all over the world, even making it to 70.000 Tons of Metal. A band I’d quickly listened to and seen pop up on plenty of bills, but never actually seen live. This was unacceptable! Could Carnation really be that good?

Holy shit, were they good. The hype is real, people. Everyone should attend a Carnation show at least once in their life. These Belgian heroes of old school death metal will not escape my sight again. Musically, it’s perfect. Groovy, violent, fast,… everything you’d want out of a OSDM record. It’s got that great modern touch, while simultaneously showing enormous respect for the late 80s/early 90s source material that inspired it, without it sounding like a tribute to anything in particular. And that’s capital. Thumbs up to the musicians for putting together such a wonderful sound.

Performance-wise, the show-stealer here is vocalist and ghoulish Ghost Rider lookalike Simon Duson. Throughout the set, he dons red corpse paint which gradually drips off his face, making him look terrifying, while wearing a torn leather jacket and two big chains that hang from his shoulders, and cross at the chest. While it’s a risky set-up that I’ve seen fail and quickly turn to ridicule with lesser-talented bands, this is the complete opposite. It works immensely well with his gargantuan vocal power. The man’s vocals sound like those of a demon freshly come out of the gates of hell itself. Very, very impressive. 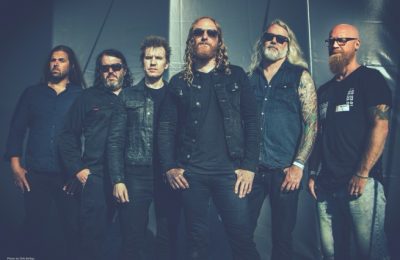