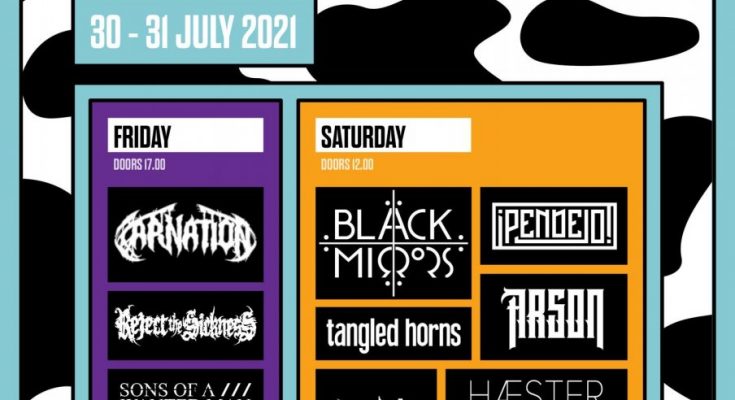 The pandemic isn’t over yet but things are, admittedly slowly but surely, starting to get back to normal. We can’t yet count on big festivals or large indoor gigs, nor can we hope for monstrous line-ups consisting of our favourite foreign bands. But the little backwater shows and festivals that are taking place are really helping us rediscover our all too often overlooked Belgian scene. One such small event is the two-day festival Rockelingen in Petit-Enghien, a lovely countryside village in Wallonia. We are very grateful to the organisation for letting us cover this sold-out edition and I can honestly say I’m already looking forward to next year, because I instantly fell in love with the festival. This may be the concert addict in me speaking since he’s had to miss his fix for some time, but the whole experience was just so cosy and fun. I felt at home as soon as I’d trodden the grounds. The bands didn’t disappoint either. Since that’s why we were there for, let me quickly give you a recap of each performance.

Representing West-Flanders’ H8000 hardcore scene came down to the lads from Hold the Crown, who were playing their first show since the start of the pandemic. Coming all the way from Moorslede, it’s a bit of a shame they were scheduled so early on. The audience was barely forming. People were probably still finishing up work and only started flowing though the doors by the time they started their set. How small the gathered crowd was, I’m sure all of us enjoyed the regular skank beats, two-steps and breakdowns they threw at us, despite the sound mixing not being ideal. Near the end of their set, they treated us to a rendition of Hatebreed‘s ‘I Will Be Heard‘, which may have fallen a bit flat had we not been so thirsty for live music. All in all a fun start that deserved a bigger audience.

Not gonna hide my love for this band which, in my humble opinion, is the very best post black metal ensemble Belgium has to offer. I’ve seen them a few times, and Sons of a Wanted Man are always top notch. The quality of their music almost rivals that of their peers like ‘Sunbather‘-era deafheaven or Der Weg Einer Freiheit, to cite a few A grade examples. This was already apparent when they performed their sound check. This was a tight and explosive set where blast beat after blast beat driving our shoegazing faces closer and closer to the ground. The major downside to this set was the fact they played by daylight. This is music that reaches its full potential when we’re packed close together in the dark. But, you know, we must keep 1,50 m apart.

A very powerful set from the Ghent/Bruges lads from Reject the Sickness. The band released their third full-length ‘While our World Dissolves‘ back in May to solid reviews, and most of us were hoping to get treated to a few new tracks. So we weren’t disappointed when we literally got the entire record. However mixing wasn’t optimal as we couldn’t hear much else apart from bass and drum pedal, especially when standing outside the tent. So we got off our asses and moved on inside in order to better enjoy the groovy and melodic guitar play. Much to the liking of singer Guy Vercruysse, who taunted us in getting closer to the stage for a bigger party. And a party it was. Moshers dove right in the pit with a few beers flying about, and even managed to pull off a small but enthusiastic circle pit. It had been too long since we’d taken part in such revelry.

Set list:
Disconnect
Disapproval of the Weak
The Plague of Life
Face the Storm
My Agony
Slack Muscles Heal
Burning Soil
The Furrow of Our Soul
Reset
We All Burn

Like Reject the Sickness, Carnation gave us another intense pummeling, but did it with a little more style. Indeed, these lads only play for high stakes and it shows yet again. I’d seen them once before with Cannabis Corpse and they simply blew me away. After that gig I just had to get my hands on their then upcoming record, ‘Where Death Lies‘, which was a big step up from an already impressive debut (full review here). Now we would finally witness a live rendition of that record. A few songs off it at the very least

Honestly, Carnation deserve all the praise they’ve been getting from the start. Despite a dead moment during which they needed to fix some sound issues, their set was solid as expected. We were subjected to a severe walloping as the Antwerp powerhouse played banger after banger. And what a set list they had prepared for us. Carnation played songs off all their releases, split included. They didn’t skimp on the newer material. ‘Iron Discipline‘, ‘Sepulcher of Alteration‘, and ‘Where Death Lies‘, the three singles off their last record were a real treat. ‘Chapel of Abhorrence‘ classics make their return as well: ‘The Whisperer‘ is always a great track to listen to and ‘Hellfire‘ is the perfect track to play as an encore.

The crowd went completely nuts here. You could see the frustration of the last year an a half dripping off them in the form of sweat drops glistening in the stage lights. The tent was packed, which made sure everyone was included in the mosh pits in some way, voluntarily or not. I enjoyed this festival performance of Belgium’s finest death metal band, although I believe they do an even better job indoors. In any case I’m already looking forward to the next one.

Done already? Wow. Time really flies when you’re having fun and this day flew by fast. Now, I was normally set to report on the next day as well, but it wasn’t to be. Without going too much into detail, I’d gotten ill and wasn’t able to make it to the festival grounds. Stay tuned for our photo coverage however, as our photographer was there both days.