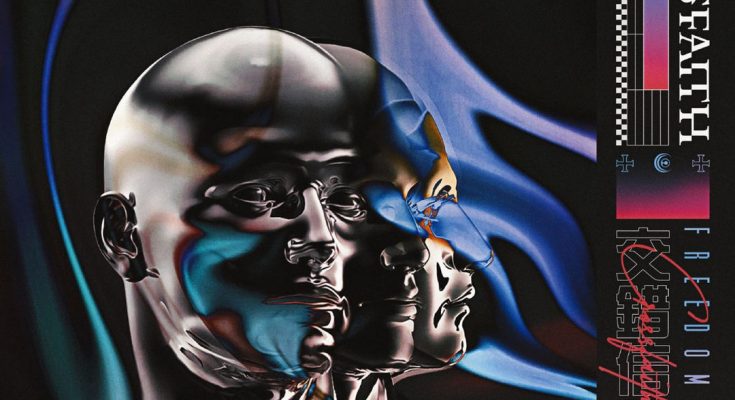 Years ago I made the pleasant discovery of the crazy dudes of the Japanese Crossfaith. They manage to successfully blend heavy metal and metalcore with electronic elements and even dubstep (which is one of the more hated styles by metalheads). I’ll never forget the high energy of their live show at Graspop Metal Meeting back then and the fact that they managed to make a whole bunch of metal fans dance to their cover of The Prodigy‘s Omen is a moment I still fondly look back at. Almost exactly a year after they surprised us with the New Age Warriors EP, they’re back again with another EP called Freedom. While that earlier EP consisted mostly out of remixes of already existing songs of them, this time we actually get 3 new songs with some guest appearances. Time to get our dancing shoes on and go nuts!

The release opens with Diavolos that immediately throws some electronic tune at you. But no worries, after only 10 seconds they throw some of their heaviest music and vocals at you, showing you that they’re not just “pop metal” sissies. The chorus goes back to more melodic and catchy singing, but in between there is plenty of heaviness to even breakdown moments that’ll probably get even the most stubborn metalhead to nod along. I really have to praise the vocals on this track for being probably some of the most diverse stuff they’ve put in one song: they go from screaming to deep growling and melodic clean vocals.

By now we’re warmed up enough to jump into the title track that features a guest appearance by Rou Reynolds from fellow electronicore mates of Enter Shikari. The band itself explained that the story of Freedom is set in the near future, reminding us Akira’s “Neo Tokyo” or “Blade Runner”. The civilization is developed rapidly and everything about living life is getting more convenience but some people have doubt about the convenient life, they started rethinking about what is the true sense of word ‘FREEDOM’. You get lured in with some groovy bassline accompanied by blaring sirens, soon to be joined by some drumbeats that’ll get your heart pumping. When the music fully kicks in, you just can’t help but starting to jump around and go nuts. The vocals go from the signature rapping to their melodic catchy singing that somehow really reminds me of countrymates Man With A Mission. To then suddenly have Rou popping up with a rap part that builds up to an electronic metal explosion/breakdown that’ll get you moving if you weren’t that far yet.

Rockstar Steady opens with some groovy guitars, electronic beats and Jesse from The Bonez/Rize “introducing” the band and himself, a little intro that somehow reminds me of early Kid Rock when he was still into his rap rock/metal stuff. And that’s sort of exactly what you get here: a nice piece of uptempo and energetic rap rock/metal with tons of electronic influences. Just like the song title already tells us, Crossfaith is ready & steady to go to the level of real “rock star” status in this world.

The Freedom EP is a great little collection of energetic tracks by Crossfaith that’ll get you pumped up and dancing. It makes me want to hear more of their work right away and go bonkers. I really hope there’s some full album coming in the nearby future, ’cause I’m hungry for more right now… And please guys, come and visit Europe again, we’re ready for you…