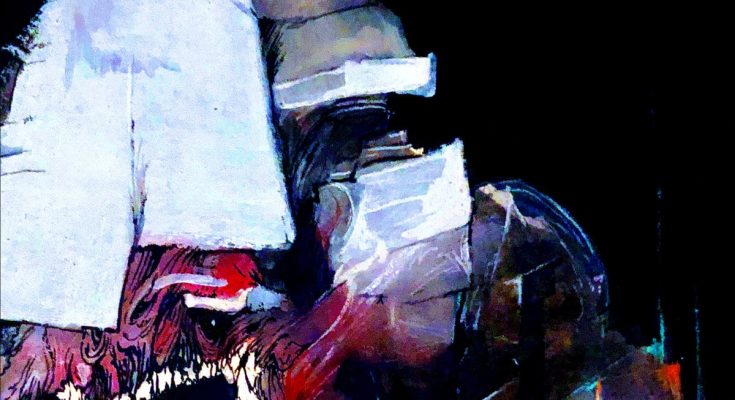 Crowhurst is not so much a band or even a one-man project, rather it is a continuous collaboration with a wide range of artists lead by Jed Gambit. The man has produced no less than 75 releases under this moniker in less than a decade.

The latest of the III, the aptly named third part of the trilogy that began in 2015. This time his partner in crime is once again Andy-Curtis-Burgill from the post black metal outfit Caina. III also sports some very interesting guest performances, like for instance Tara Vanflower from the cult darkwave act Lycia. None less than Tony Wakeford lends his distinctive dramatic voice to great effect as does Ethan Lee McCarthy albeit both on opposite sides of the spectrum.

McCarthy’s love of harsh noise was already more than apparent on Primitive Man’s previous collaboration with Unearthly Trance. Once more, he does his utmost to paint humanity at its ugliest.

Wakeford on his turn lends an air of melody to the brutality. His contemplative voice and brooding acoustics immediately recall his own work on Sol Invictus and constitute a fine contrast with the blackened sludgy noise.

They are scheduled for 2 performances at the coming Roadburn Festival next week. You won’t get a lot more opportunities like that, so be sure not to miss them if you’re going to the festival.

As with most of his releases, it is difficult to pinpoint it to any one genre. That doesn’t mean you’ll just hear an excruciating racket of indistinguishable white noise though The noise pollution seeps in slowly. The album even starts of as fairly regular USBM, monastic choir intro and everything.Yet by the end of the record you feel as if the T-1000 itself is chasing you across mechanized shrieks, as ‘There is no end in sight”  keeps wrecking through your skull like a mantra from hell.

Once you’ve adjusted your set- to use a Twilight zone pun- you will make out a unique amalgam of black metal, sludge, and apocalyptic folk that has been poured through Gambit’s industrial mangler, often all within one track.