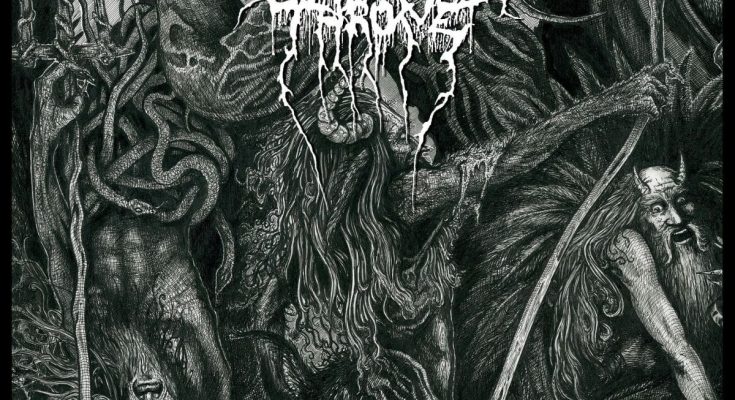 The iconic black metal outfit Darkthrone return with their sixteenth album released via Peaceville Records. Throughout the years the duo masters Fenriz and Nocturno Culto have extracted many elements from the metal genre, the early onset into the black metal principles began in the early nineties. Darkthrone started as a death metal band, and released their memorable album Soulside Journey. The Norwegian outfit took their inspiration from many legendary bands such as Bathory and Celtic Frost.

It was until the dawn of 1991 when Darkthrone completely veered into black metal, with the unholy fidelity which marked them as one of the rising pioneers of black metal in Scandinavia beside Mayhem. The band released three classic albums known as A Blaze in the Northern Sky, Under the Funeral Moon and Transylvanian Hunger and many more albums followed.

In the year 2005 the band was clearly directed towards a major shift in sound, the duo members Fenriz and Nocturno Culto were set to integrate different elements of metal. From punk music, crust to heavy metal and even doom metal. Yet this was a challenging decision from the band to feature other elements into the music. In the last decade Darkthrone were able to adjust into multiple styles from thrash, heavy and punk metal. The interest towards heavy metal and also doom metal has opened a vast space of creativity and today Darkthrone has become like Motörhead.

With the indefinite number of styles and musical direction, which resulted into a refreshing experience to the band musical creativity. Old Star is no different than what they’ve released in the past the sixteenth album by this Norwegian caliber is an excellent follow up to the band’s latest album Arctic Thunder that was released in 2016. The elements of classic metal like punk, thrash and speed metal were presented on their past albums. The balance between different genres came together with a symmetric unification.

Listening to Old Star is like channeling through the eighties vibe of heavy metal, but it’s all about the riffs, and they’re quite impressive and thundering. From the opening track I Muffle your Inner Choir which introduces aspects of crude metal and the quality of the resounding riffs and hammering drums. With respect to the vast musical changes Old Star is oriented by the slow and vicious riffs of doom metal while the grim feelings that pervades into the soundscapes are overwhelming.

The dark & haunting rasps undeniably gives more value to the songs, The Hardship Of The Scots is heightened by the extreme riff mania and continues in the same vein of the previous track. The strong and natural progression clearly shows the talent of the duo who have been touched by the lost creativity of the 80’s classic metal. Old Star is wrought by the pandemic riffs which also includes strong and violent tone of the organic drumming.

The album covers all the styles which fall under the metal genre, from the slow tempo pace of the third track Old Star which is characterized by the slow guitar riffs that embodies the epic elements of doom metal. The true understanding of how to employ various fundamentals of metal is extensively presented on Darkthrone’s new album. The striking moments of the guitar riffs on Alp Man has an old school feel, the band also brews their own flair of doom metal. The riff variation avoids the repetitions allowing the songs to veer into unpredictable course, and the importance of solos and melodies are beautifully interlaced.

Duke of Gloat is an upbeat song and powered by the striking riffs whereas the tremolo pickings sound authentic and catchy. The brooding atmosphere and sinister vocals echoes with constant changes, the drum pace is energetic and each of the six tracks have that dark and grimy effect. The impressive role of lead guitar section is quite possessing and after years of musical changes Darkthone has perfected their sound.

Old Star is a raw and primitive record the band has concentrated in creating their unrefined riffs from the classical lore of heavy metal. The constant change of the direction of the closing track The Key is Inside the Wall include many riff patterns. Finally Darkthrone dedicates this album to the true fans of heavy, this is an essential record and heavily influenced by bands like Iron Maiden, Celtic Frost, and Black Sabbath. Old Star is a slow and a menacing album but before all it’s a solid and raw reversion to the principles of 80’s metal.