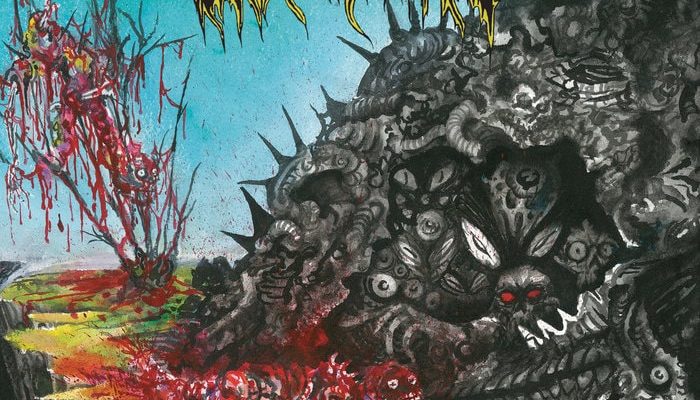 In the early ’90s, Florida was a hub for many death metal bands, twenty years later the Pacific Northwest state of Portland, Oregon became a thriving center of many enthusiastic old school death metal bands such as Ossuarium, Petrification, Coffin Rot, Autophagy and many more. Disembowel is one of the newest groups that bring their own endowment of old school death metal. Their first full-length album ‘Echoes of Terror‘ is released via Maggot Stomp.

Formed in 2016, Disembowel‘s first demo release ‘Rehearsal Demo‘ and ‘Dramatic Decay’ showed potential from these youngsters. Now four years later they appear to have fully ripened their newest material as their focused songwriting has developed into maturity. The lineup consists of Abram (bass guitar), Cage (guitars) and Sergio (drummer/vocalist). ‘Echoes of Terror‘ is soaked with the retro fashioned riffs and has a very refreshing vibe of guttural death metal.

Album opener ‘Putrified Remains‘ brings filthy old school riffs and cavernous growls backed by the crude tone of the heavy bass guitar. The track is structured upon the mid-tempo with the guitars exuding juicy riffs and the drums having an abrasive tone. Through fierce drumming carnage begins, Disembowel creates plenty of fast tempos as they bring brutality and aggression through the impact of the double bass. Although most of the riffs are simplistic they exude infectious diseases. With the sickening sense of guttural growls on the second track ‘Immolation‘, a certain level of brutality and blistering tremolos surges in the petrified air.

‘Sadistic Pleasure‘ is one of the longest tracks of the album lasting for five minutes of intense brutality. The drums pick up the pace and shift into a more effective tempo, combined with brutal riffing. ‘Echoes of Terror‘ feels inspired by many death metal bands. The swelling riffs are emphasized upon the slower tempo while the drums are the mainstay of the band and provide a dynamic sense.

Disembowel‘s debut features many slow riffs although the drums have the ability to strike forcibly the vocals approach towards cavernous style makes the songs highly enjoyable. The old school vibe here is similar to old Suffocation and Baphomet. The crude and petrified approach to death metal and the quality of the riffs is one of the highlights of this debut. ‘Chuffed Beyond Recognition’ builds up more on the tremolo pickings and the abrasive blasting alters between pacing and double bass.

The fifth track ‘Disemboweled‘ is layered with infectious riffs and led by cannibalistic growls. Among other infectious songs that captured my attention are ‘Echoes of Terror‘ and ‘Ascend to Obscurity‘. Disembowel and their visceral understanding of the mid-paced nature of death metal succeeded to bring many striking riffs. Ascend to Obscurity boost a dynamic power whereas the drums ventures between the mid-paced and blast beats. The full round in imposing the heavy riff along with the pummeling drums shows an absolute class of songwriting. In my opinion, this is one of the best releases that Maggot Stomp has released since last year.

The raw flavor of the riffs have that putrid sense of old school death metal, ‘Ripping Christ from the Cross‘, for example, is fulfilled by the double bass. The drums often create a fast tempo while the guitars and the reverberating bass provide heavy impulses. The year 2020 is shaping up slowly to be quite memorable with all the quality releases, with ‘Echoes of Terror‘ among my favorite death metal albums of this year. This is a good standard for old school and brutal death metal if you like bands such as Baphomet, Vastum and early Suffocation.