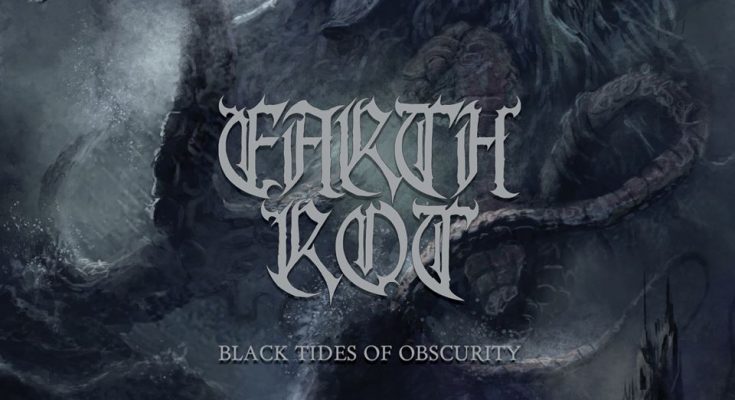 To what extent the modern metal bands can push the boundaries of their extreme musical level? Well, the answer comes straight from the Australian death/black metal outfit Earth Rot. Having released two albums and two EP’s in the past the Aussie quartet decided to test their sonic abilities. Their newest album Black Tides of Obscurity will be released via Season of Mist scheduled for March 6th. The band is comprised of Jared Bridgeman (lead vocals, bass guitar) and Tom Slaughterhouse (backing vocals, guitars) Colin Dickie (guitars) and D.J. Maloney (drums).  Earth Rot music is a hybrid mixture that crosses between the styles of modern metal death/black metal. Although I was not familiar with their prior releases until recently, the newest album expands beyond the previous efforts.

Album opener Dread Rebirth is an extreme sonic blast of booming riffs and vocal shrills. The aural blast comes from the drums and guitars providing an oppressive atmosphere. Whit the heavy emissions of the HM-2 buzz-sawing riffs defining the tone of the guitars, Earth Rot creates an array of moody moments the guitar arrangements and the twisted growls are one of the key elements. The following track New Horns is highlighted by these qualities with creative songwriting and compelling assaults. Black Tides of Obscurity is an extreme hybrid album combining straightforward blast beats and high pitched vocals. Some elements of post-metal are also included in the songs regularly scattered by the barrage of the assaulting riffs.

The heat blasts from the drum mechanism with the constant blasting of the double bass kicks with Towards A Godless Shrine uncovering the band’s inclinations to black metal. Immense riffs are unleashed in your face, backed by monstrous growls and tides of destruction causing damage beyond repair. From the guitars destructive and overwhelming riffs unceasingly erupt besides executing memorable solos.

The aggressive nature and compositions maintain the song dynamics which charges the vitality of the songs. Similarly, the fourth track Unparalleled Gateways to Higher Obliteration is performed by the brutal chugging of the guitars. Yet the vocal performance itself adds a lot of weight to the songs, Jared Bridgeman growls are twisted and they sound more brutal than before. Tom Slaughterhouse and Colin Dickie‘s guitar performance keeps the intensity of the riffs throughout the album. Ancestral Vengeance is a hybrid mixture of black metal growls and tremolo pickings, Earth Rot implements a dynamic formula. And this what gives the songs a violent nature, as they twist their sounds from death to black metal. The pace shifts and oscillates due to the robust drumming performance of D.J. Maloney.

Black Tides of Obscurity is energetic and simultaneously complex where the drums and guitar, in particular, are unpredictable. The Cape of Storms has a wide variety of styles and there is an explicit leaning towards black metal riffs and shrieks. One of the more notable sides of the band is the level of technicality. The effect of the modern extreme metal style has influenced the direction of the newest album hence given it a violent tone for the songs. Mind Killer is an example of how Earth Rot binds the modern style of death/black metal. While other contemporary bands such as Portal and Altarage brought their unique craft to the masses, Earth Rot style feels more organic and violent but to a certain extent. Unraveling Vapor of Sanity features some melodic guitar undertones but overall this is one of the best tracks of the album.

The tracks on the album are bizarrely twisted and sound fresh, the album is a complex mixture of death/black metal and highly varied. Launched by extreme and aggressive riffs, Black Tides of Obscurity is a good album and has some memorable moments. This is another band that folds the tides of extreme metal and brings a good mixture of death/black metal. The Aussie quartet is aware of the effect of the modern metal clichés and this what gives the music a varied and fresh sound. In many aspects I found the new album to be interesting but somehow not convincing enough compared to what bands like Altarage, Portal, or Ulcerate have offered in this.