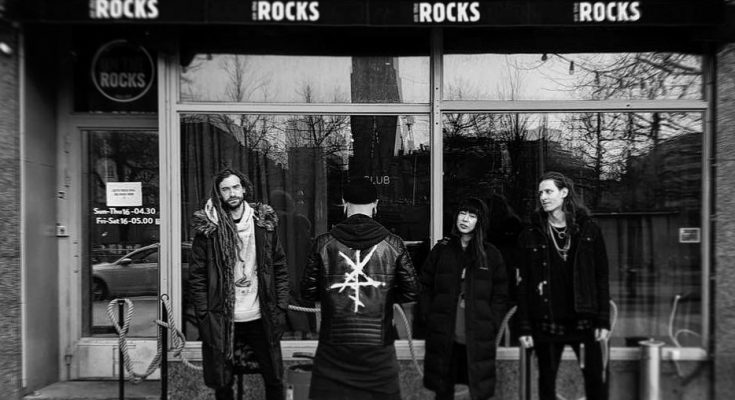 In 2018 I attended Hellsinki Industrial Festival, where I discovered quite a couple of really cool industrial artists. Happy I was to see that two of those artists ended up being booked for a small gig by the same organization (Elektrik Products) in the center of Helsinki. So I geared up, got my earbuds out and got ready for a night of harsh beats and relentless dancing. Here comes the boom!

The Spanish duo of Larva impressed be back in 2018 when they opened the Hellsinki Industrial Festival with an artistic and emotive performance. This time around they brought much of the same: harsh industrial beats, artistic integrity and a strong message. The big difference was that vocalist InqUest had free reign of where he could go. With his head wrapped in plastic and carrying around some creepy mask at the start of the show, he was yet again an imposing presence and regularly came off the stage to be literally in our face screaming and shouting his lines. Soon the present crowd started to move to the beats and found a proper warm-up with the duo.

A real revelation for me at that Hellsinki Industrial Festival back in 2018, was the Estonian Freakangel. Their mix of industrial beats, hardcore violence and metal melodies with a whole bunch of attitude translated in one hell of a show. Getting to see them up close on a smaller stage this time around, was a damn cool experience. Frontman Dmitry Darling is quite the character on stage, this time wearing some kind of dress and responsible for quite a chunk of the attitude that comes from the band. The stage setting was dark and moody with only now and then bright lights flashing, giving the whole show a menacing feeling throughout. This felt like a different beast from when I saw them on a big stage kicking ass, but quite the lovable one still! Heads were banging, bodies were moving to the beats and alcohol consumed in quite the amount, Freakangel confirmed to me what I already knew… these guys are damn good!