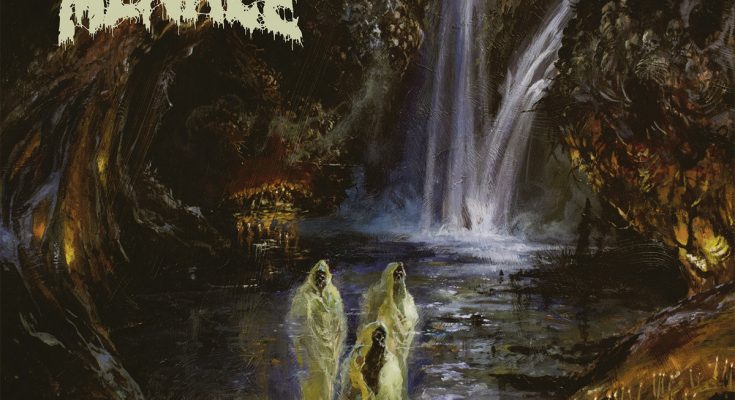 The Finnish death doom masters have returned from the unhallowed crypts of the dead. After three long years of hiatus, Hooded Menace has decided to welcome new individuals on board allowing for musical expansion to grow mainly in the territories of death doom metal. The addition of the new vocalist Harri Kuokkanen, along with a new bassist Antti Poutanen and Otso Ukkonen (who plays drums for another Finnish death doom band known as Krypts) resulted into a firm establishment. Ossuarium Silhouettes Unhallowed is the fifth album consisting of six new tracks evoking a monstrous crushing record of profound death doom metal.

Musically the band has made some changes compared to their previous albums: the guitar patterns on the new album along with the harmonies are strongly adhered to their musical style, and once again Lasse Pyykkö has fulfilled the curse in delivering fresh material, evolving their sound with a quality of crunchy oriented doom metal. Hooded Menace lingers mostly to the melodic side and drifts away from the grisly horror themes with their new album Ossuarium Silhouettes Unhallowed, as they has divided their songs between the rawness of old school death metal sound without loosing the effect of their melodic sections. The shattering monstrous vocals of Harri Kuokkanen are layered with mournful melodies and sad melodic dual guitar passages are triggered with double drum paddling, and have shaped their new tracks with a pulverizing sound.

Hooded Menace shows a great perfection of unison in musicianship. Opening song Sempiternal Grotesqueries is a massive monumental track of ten minutes long which builds up slowly with a funeral doom sound to transit later into an epic thriller of sinister death doom. It’s quite evident that Ossuarium Silhouettes Unhallowed captures a wide variety of styles from the heavy guitar dirges of funeral decay to lashing sonic melodious riffs. In Eerie Deliverance is a murky raw death doom metal track, where beautiful melodies soar out from the dark crypts. And when the lid slowly slides open the Hooded Menace crawls to the haunted graveyards, marring densely between grandeur doom metal and enormous death metal quality. Cathedral of Labyrinthine Darkness is a deep journey into the gloomy procession of mournful art, cloaked with rhythmic guitar riffs which depicts a perspective atmosphere.

Ossauarium Silhouettes Unhallowed is very atmospheric and melancholic, featuring many great tracks all perfectly composed by Lasse Pyykkö. The music is portrayed with a funeral doom parade into the realm of death. The melodies are wrenched full and often twisted with talent giving the songs the needed depth to grow over the listener. Cascades of Ashes is classic Hooded Menace track, its steady harmonized riffs captures the unhallowed fields of demise that is death metal. Charnel Reflections is dark and melancholic, the ornate guitar solos are added dramatically to the middle of the track with absolute perfection. Ossuarium Silhouettes Unhallowed is a thrilling album that’ll capture the listener with its slow riffs. Still holding on to the rawness eventhough the production is very modern, it’s gradually becoming one of Hooded Menace‘s best albums to date.