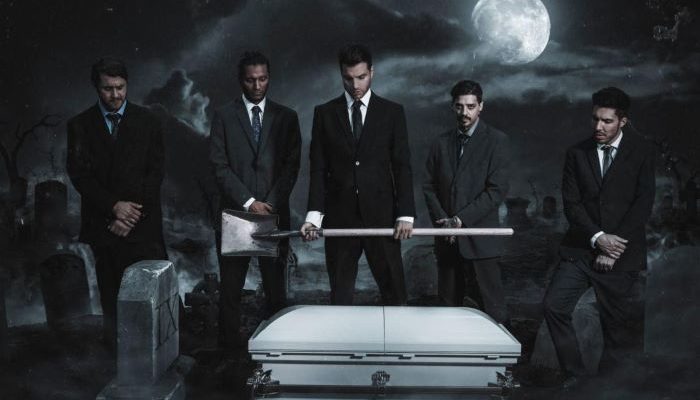 Slashercore outfit, Ice Nine Kills have dropped the fourth and final new track from their upcoming album ‘The Silver Scream 2: Welcome To Horrorwood‘ prior to its release this coming Friday, October 15th via Fearless Records. Today’s offering submitted into evidence is titled “Funeral Derangements” and is inspired by the Stephen King horror classic, Pet Sematary. The accompanying music video features Horror icon Bill Moseley (The Devil’s Rejects, House of 1000 Corpses), a show stopping cameo from Miko Hughes, the actor from the original 1989 Pet Sematary, a cameo from Josh Katz from Badflower portraying the undead Victor Pascow, and James A. Janisse and Chelsea Rebecca creators of the wildly popular Dead Meat James “Kill Count” Youtube series.

“In perhaps the most ironic cameo in recent horror memory, we’ve tapped the amazing Miko Hughes, (Gage from the original Pet Sematary), to play the role of the reckless truck driver. An 18 wheeler, a twisted cat, a scalpel and an evil burial ground all come together in what I’d call our most ambitious homage yet. Dig in…”

When I first heard the song, I instantly liked how heavy it was but the video and all of the cameos in it make it 1000x better than I expected it to be. Ice Nine Kills one-ups themselves each time and its absolutely insane!