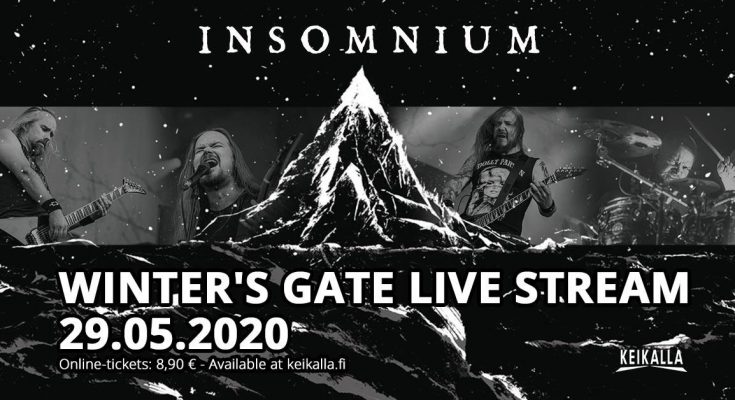 To me, Insomnium‘s ‘Winter’s Gate’ is still one of those releases that always does it for me. An epic song of a bit under an hour long without any breaks, telling a story about vikings that is nearly just as epic. A theatrical experience through music that is simply mind-blowing and out of this world. To this day I can still put the record on and get completely lost in the music (for my review of it, go here). After seeing it live once or twice and deeming it definitely as good and captivating live, there was no hesitation that I had to see the live stream during which Insomnium plays that album/song. I took out my special edition of the album that includes the book of the short story, got cozy and was ready to move into the dark world of this piece of work.

It has to be said that 2020 hasn’t been the kindest for Insomnium (****). Their North American tour with Omnium Gatherum had to be canceled due to the crisis, a live stream event (one of the first done by a band during this crisis) set up for their fans failed and ended up being a recorded show instead and recently, their upcoming tour with Eluveitie and Infected Rain in North America was announced to be canceled as well. This ‘Winter’s Gate’ live stream seemed like the perfect opportunity to redeem themselves. And many fans were looking forward to it immensely clearly.

And straight of the bat, I’m pretty sure I can speak for everyone that they have redeemed themselves immensely with this stream. ‘Winter’s Gate’ was played to perfection and it was interesting to actually being able to see the guys put their passion and all into it. Because usually at these ‘Winter’s Gate‘ shows the stage is drowned in smoke and lights, only seeing silhouettes move around… The line-up for the show didn’t have founding member Ville Friman (who is probably stuck in the UK), but now full-time member Jani Liimatainen was taking his spot. He proved to be an even greater addition to the line-up with flawless clean vocals, really impressing me.

After the epic 40 minutes, the guys of Insomnium weren’t done with us yet. Clearly bursting with energy and enjoyment playing together again, they cranked out one after the other “oldie”, a true enjoyment for the old school fans among us. All songs from their first 3 albums, some of which they hadn’t played live for a decade or in Jani‘s case hadn’t even heard before preparing for the live stream. That fans were really appreciating this, was to be seen in the live chat that simply exploded. Like Niilo said at some point “they are going too fast for us to be able to read, but keep those comments coming!”. It shows how great these guys are, both musically and as human beings. It was a blessing to see them like this after all the troubles and for melo death fans a true feast with this setlist and the Q&A session afterwards!

Setlist:
Winter’s Gate
The Gale
Mortal Share
Drawn to Black
Nocturne
The Day It All Came Down
Daughter of the Moon
Bereavement
Medeia
The Elder