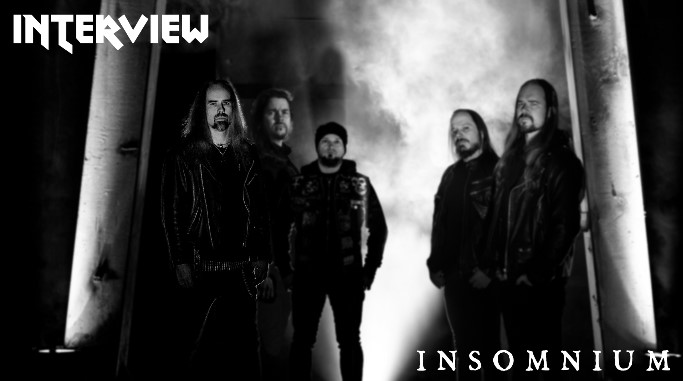 The past year and a half has been especially hectic for Insomnium. After having to cut off a massive tour they were doing with Omnium Gatherum in the US, causing them to lose a whole lot of money, they seemed to simply not being able to catch a break. Like the first attempt at a live stream show, didn’t work out all that well due to technical difficulties. But with the ‘Winters Gate’ live stream and the steady release of new singles and music videos that are now collected on the ‘Argent Moon’ EP, it seems they’re getting back on top of things. Time to have a chat with the enigmatic Markus Vanhala on the day of the EP’s release!

We first chatted a bit on how Markus actually has been quite lucky on the level of performing live this past Summer, having had shows with both Insomnium and Omnium Gatherum, some of them even taking him to major festivals abroad like for instance Alcatraz Festival in Belgium. And he’s anyway not one to sit still regardless the situation, hence the new music and release of ‘Argent Moon‘, an EP that probably wouldn’t have happened without the pandemic. We talk about the concept of it all, how he’s been challenging himself by starting to sing cleans and taking the time to actually throw away songs and only pick out the best ideas and music. Besides talking about Insomnium, Markus of course had to bring up his new pet project I Am The Night, the black metal band he wanted since the nineties being a black metal guy to begin with. He even brings up a great anecdote on talking to Ihsahn, one of his main inspirations, at Alcatraz about the Emperor cover they did with I Am The Night! We also shortly talk about how awesome it was to create the video for Omnium Gatherum‘s new single ‘Paragorn‘ and what to expect from the upcoming new OG album. Lastly, Markus promises us that the next Insomnium music will be heavier and harsher again, possibly more in the direction of the epic ‘Winters Gate‘ and even hints that he’s working on another secret Swedish/Finnish Gothic inspired project! A lot to look forward to for sure!

One thought on “Interview Markus Vanhala – “Our next music will be grumpy old angry guys kind of music again, no ballads””