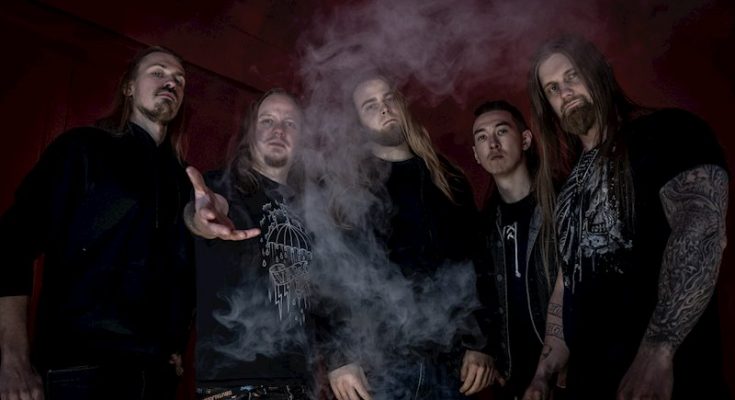 I had the privilege to talk with Juhana Heinonen from the Finnish melodic death metal band Re-Armed. We talked about the upcoming new album ‘Ignis Aeternum’ that will be released on the 5th of June, COVID-19, the past and the future.

Re-Armed is a melodic death metal band. We started the band in 2001. Next year is the 20th anniversary. The music style has changed a lot since the early years of the band. The new album will come out the 5th of June through Black Lion Records. There are a lot of new elements on the new album that we are very proud about.

GRIMM: I already listened to the album a few times. The first thing that caught my attention was that there are a lot of symphonic elements, clean vocals and a lot of melodies also. This is something new for Re-Armed because you never did this on your previous albums. Why the change?

GRIMM: And will you explore this kind of style more on the next albums or is this just an experiment?

We don’t know yet. 2 years ago when we began to write the album, the first song we made was ‘Built To Last’ and it already had the symphonic elements and the clean vocals in the chorus, it just came naturally. And now we have a whole album like ‘Built To Last’ with a lot of symphonic elements and clean vocals. We will see what the next album will bring. Every album is a different page of the Re-Armed chapter. I don’t know if it became like this because of the line-up that changes with every album. We don’t know what the next album will sound like. We just try to enjoy the moment of the new album in this difficult times because their are no gigs.

GRIMM: You say difficult times because everything is cancelled. But I see that the big bands are streaming their live shows. Is this something Re-Armed is thinking about doing or is it just an opportunity to write new music because everybody is stuck at home?

Well there were a view gigs and release shows but everything has been postponed to the fall or even next year. So the only thing that we can do is releasing some stuff on YouTube or social media sites. So we can let everybody know that we are releasing a new album soon. Because the new album has been a lot of work and are trying to keep it in the picture. It’s the same for the big bands: tours cancelled, postponing the release of their albums. And we had the same thing in mind about the streaming of live shows but we will see if it will happen or not.

GRIMM: Were there plans to postpone the new album?

We thought about it but on the other hand we wanted the album to come out and we will do the shows if it’s possible. So we had a conversation about it but we decided not to postpone the album.

GRIMM: There has been a lot ups and downs in the history of Re-Armed. In 2014 your songwriter decided to leave the band and it has been silent in the Re-Armed camp for a whole year. Was there a moment at that time you thought of ending the band?

Well I joined the band in 2014 and like I said earlier every album has different line-up like on this album the guitarist section has had a lot of changes. So splitting up was never on the table. And yeah, Tommi Helkalahti left the band in 2014 but I joined it that same year. And with the new album we now show that we have a good chemistry going on and this is the best album we can make at this time and we are eager to play the new elements live.

GRIMM: Now for the new elements of the new album, those symphonic elements. If you decide to use this in the future for the next album, will you get a new member in the band to play the keyboard? Cause I can imagine if you continue to use the symphonic elements and you don’t have a keyboard player, you’ll have to use samples. And run the risk that at some time there will be a lot of samples and you loose the live effect.

It’s something of both sides. The keyboard has been done by our good friend Sammi. On this album and the previous one and we use samples live because it’s a lot easier to get 5 guys on the road and not 6. For now we just use the samples but for the future we will keep it in mind to maybe look for a keyboard player to play the symphonic elements live and not using samples but an actual keyboard.

GRIMM: When you write music, is it a group thing or is there someone who writes all the music and someone writing the lyrics individually?

That’s a good question. For our previous album Mika Oinonen, when he was still in the band, wrote 80 or 90 % of the album. The guitar players played their parts and then the entire band, but for this album it was more democratic. We have our main writers and they come up with the riffs and the basic stuff but we all add our own ideas and options. And then we look if it works or not. We listened together as a group and we discussed every song. And we decided which song we would use and which song not. And there were a few doubts about a few songs and then we added the symphonic elements and it gives another energy to some song. And by adding the lyrics we also discussed as a group which song we wanted on the new album. So at the end we do all the songs together because we want that everybody in the band loves the songs. Like guitar players Allan Välimaa and Oskari Niekka wrote the main parts of the album but myself, Liro Karjalainen and Jouni Matilainen then came along and we just jammed together and created the album as a band.

GRIMM: You had the honor to tour with Insomnium in Japan, how was that?

Yeah, it was remarkable. When we heard this tour was coming, we didn’t had a guitar player. So we said we would do it although we didn’t have the line-up for it. So we called Oskari Niekka who was an assistant player just for the albums at that time. But Japan was insane, the shows were insane, the crowd was insane and it’s a land we would visit on vacation also because of the different and unique culture. The tour was also amazing, not only Insomnium but the other bands as well, there was even an Asian-inspired band in the line-up, we had a great time. We have really good memories about that tour that you can’t erase. And there are some tour stories from Japan that made the tour more interesting.

We played our first gig in Osaka with Dark Floods. And we drove together in a car that we shared with Dark Floods. The car would drive all night from Osaka to Tokyo and we couldn’t sleep. We tried to sleep in the car and at 5 o’clock in the morning the car just stopped. It was overheated so we we’re stuck in the middle of nowhere. And instead of looking for some taxis to drive us to a train station we went to a karaoke bar at 7 am in the morning. Some of us were sleeping and others were just partying our asses off… it was just amazing. Those moments are just part of being on the road.

GRIMM: I’m working on a review of your new album and I must say I’m afraid you will lose a lot of fans because of the genre twist that you did…

Yeah, we know we will piss off a lot of fans who are fan of our earlier stuff. But we already let some fans, who we are friends with, listen to some songs and they are really stoked about it. So we will lose some fans but we will gain new ones, you can’t please everybody.

GRIMM: The musical style that you play right now on the new album is for me a mixture between Wintersun and Insomnium. Do you agree?

Yes and it’s something that I enjoy. They are not the bands that I had in mind, but if you think about it, yeah I think your right. Because of the symphonic elements and some riffs here and there. It has some Nordic Scandinavian vibe in it. I don’t know if it’s ironic that our label is a Swedish label but for me it has a Swedish metal vibe. We have some Arch Enemy riff types, some Amon Amarth riff types and even some At The Gates riff types. We have picked a little bit of the Gothenburg genre. But I also think we have our own sound because of the symphonic elements and some black metal or thrash vibes we sometimes use. I could not say what genre we should be considered with but we have indeed a lot in common with melodic death metal because of that Gothenburg vibe.

GRIMM: We have reached the end of our conversation, is there something that you want to say still?

Yeah, thank you for the interview. You don’t have to wait long for the next album because there were like 10 songs that we didn’t use and that we can use for our next album. I hope you’re doing fine. Check out our social media sites and our website Re-Armed.com and Facebook. Thank you GRIMM Gent for the interview.

GRIMM: No problem enjoy the good weather there in Finland.