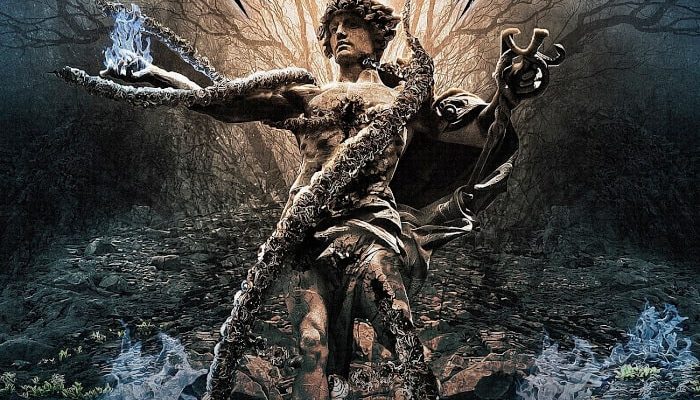 Re-Armed is a Finnish melodic death metal band formed in 2001. We had to wait until 2012 for their first record called ‘Worldwide Hypnotize’. 2 years later we already received their second album ‘Rottendam’ and in 2016 their third album called ‘The Era Of Precarity’ saw daylight for the first time. After that there were a few changes in the band in both the line-up and in sound. The first albums we’re aggressive death metal and now they chose for the more melodic death metal with atmospheric elements. And they welcomed 2 new members: Juhana Heinonen on bass and backing vocals which I had the pleasure to do an interview with (read it here) and Oskari Niekka on guitars and backing vocals. And after 4 years there is finally their new album ‘Ignis Aeternum’ and I am curious what they made of it.

After my interview with Re-Armed they said that this album is an experiment to use more keyboards and more melody but still stay true to their death metal sound. ‘Dive Within’ is the first taste and it’s a good one. They still use their aggressive death metal sound but implanted some keyboard and melody. And these 2 mixed together gives an awesome sound. At the end of the song we get treated with some orchestra. A beautiful ending on a death metal song, I never thought I would say this.

Then we have ‘Beyond The Horizon.‘ They recorded a video clip for it and I know why. It’s one of the best songs on the album. They even use clean vocals. I don’t think that a lot of the true death metal fans will like this but they will gain a lot more fans due to the variety. Death metal drumbeats, melodic guitar riffs, keyboards and some clean vocals. That’s what you get on ‘Beyond The Horizon.’

‘Ode To Life’ is a little different again. More aggressive, more technical but the keyboard and clean vocals also get a place in this song. It’s a bold experiment but a nice one. ‘Eager To Collapse’ kicks off with a piano intro and then rolls out in their more melodic death metal sound again with the clean vocals. ‘Resistance’ is more a song from the old Re-Armed: No nonsense death metal, aggressive and tight.

‘The Hollow Lights’ has some power metal influences. I don’t think this was their plan but that’s what we hear. And I have to say it sounds good, the melodic death metal with power metal really pays off. ‘Remain Unbounded’ is a slower song. It has some doom influences with some fierce blast beats.
‘Words Left Unsaid’ has no real surprises going into some more basic melodic death metal. ‘The Voyager’ on the other hand, is one off my favorites together with ‘Beyond The Horizon.’ There are some awesome riffs together with the keyboards and clean vocals. This is one of the songs that stands out from the rest.

We end this record with ‘Built To Last.’ It’s the oldest song on the album because it was already released as a single in 2018 and was the first impression of their new sound with the new members. And it fits perfectly with the new songs off the album. Nicely done guys.