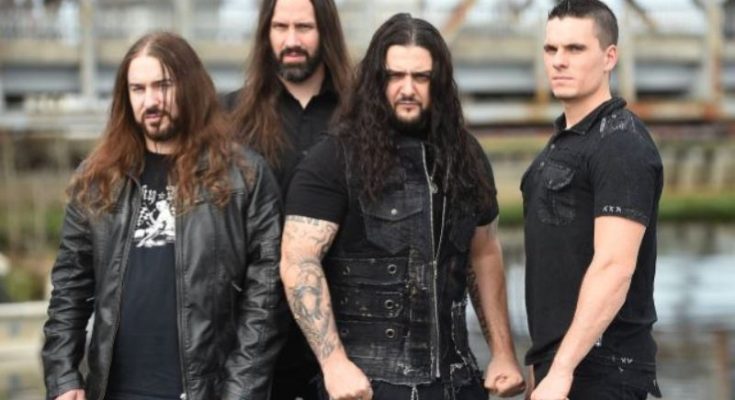 Canadian melodic death metal band Kataklysm exists 25 years in 2017 and are currently celebrating that with a European tour. On the 7th of October, they brought the ‘A Moment In Time Tour’ to the Trix Club in Antwerp. I had the chance to have a chat with guitarist Jean-François “Jeff” Dagenais about beer, doing what you love and maintaining a good working band for so long.

How are you doing today Jeff?
Very good. I’m actually starting to feel a lot better from beating the jet lag. We arrived four days ago and it’s been crazy. We started partying in the hotel room and went straight to the first show. It took a few days to adapt to it but now I’m feeling great.

This is only the third show on the tour that you’ll be playing, how has it been so far?
It’s been good so far. The first show was a sell-out show. The second show in Leipzig yesterday was crazy, we had almost over 800 people. We were very nervous, but it turned out great. We all live in different cities, so we don’t have a lot of opportunities to rehearse the songs together. We did a little bit in Canada, maybe a month ago, but we were all very stressed because some of the songs we hadn’t played in 15 years, some of them never since the studio.

So there are some ‘first timers’ on this tour?
Yeah, you never get to play all the songs from an album when you have a new release. You play maybe four or five because you have to fit them with the older stuff into a one hour and half setlist. When you’re playing a full album like that, you have to relearn almost everything and we didn’t rehearse a lot together. But the first show we played we thought it was pretty good, not many mistakes and the energy was there. Yesterday was even better, and I think tonight will be the night where we’re going full force again.

You decided to play the Trix Club instead of the big concert hall downstairs.
I was so happy about that to be honest. I don’t like playing the big venue because first of all, it feels a bit impersonal with the audience. And the second reason is: I’d rather play a smaller venue fully packed than the big ones and seeing a lot of empty space in the back.

I guess it’s easier too to get everyone in the audience going when it’s a small venue.
It’s just a better vibe. When Kataklysm started off we were all music fans, we still go to a lot of shows to see bands, and I always prefer to see them in smaller places. It’s always a bit more special and personal to me, as a music fan, but also as a musician.

It must be cool too to play big festivals I reckon.
It’s great in a sense that usually the bigger the show is, the more professional the sound equipment is and the crew working with you. Of course it’s impressive when you walk on stage and see 50 000 people in front of you. But at the same time there’s still this distance where you have the bars and security inbetween the band and the audience.

I saw Kataklysm for the first time at Graspop 2015, you played for a full marquee there! That’s a huge difference with what we’ll be seeing today.
It’s cool to adapt to every situation. Some shows are humongous and others are a bit smaller. I always have something for those cool, small shows where everybody is up close.

Pretty cool that Kataklysm can do both.
I feel very humbled by being able to do this as a carreer first of all. To have all these opportunities to play with different genres of music, different type of settings like those big festivals. Even with supporting bigger bands that don’t suit our genre at all. We always come across very well. I think it’s cool sometimes to be the heavier band on the show, where you get to play with more commercial, rock type bands. Then it’s like a punch in the face of the audience. We certainly enjoy it because it’s our passion. We’re very lucky to have a carreer out of it and be able to pay the bills from doing what we love. I don’t see it as a job, every day is a new situation and we just go with it. 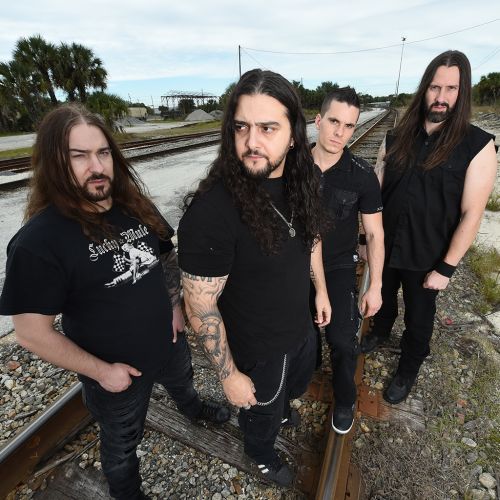 Still after 25 years!
Yes! It went so fast. I still feel like I’m the same 14 year old boy that loves music and wants have a band and be on tour, experience the world and the lifestyle. None of us feel old, we’re on stage still having fun and still feeling the same feeling we used to. We always had this rule in the band where we said that we would stop playing the day it isn’t fun anymore, we don’t want to do this for our paycheck. The day it becomes like that I think we would quit, we would just go do something else. There’s so many other things we can do in our life, but we surely still have the fire inside.

That’s very unique for a band that has been around for such a long time already.
Sometimes we talk to bands where they’re really bored and they sound like they don’t want to do this anymore. They’re only there because it’s their job and they want to earn money. I respect that as well, but if it was for money I would do something else. Stay home and find something cool to work on that I like.

You shouldn’t be in the music industry for the money anyway.
Exactly. It’s not something you choose, to make money. Because there isn’t a lot, unless you’re a big popstar or something. If you’re able to pay your bills and everything’s covered you’re lucky.

On this tour you’ll be performing both Shadows & Dust and Serenity In Fire in full. Why these two albums?
We started off as a very underground band. When Shadows & Dust came out it was 2002, that’s the album that kind of blew us up to another level. This is when we started to see a lot of fans buying a lot of t-shirts and we were offered a lot of bigger crazy tours with big bands in our genre. For us it was a great record, also musically. It was the album that broke the ice for us and put us on the map, sorta speak. And the follow-up, Serenity In Fire, made us even bigger a couple years later. We always remembered those two as being the initial impact for our carreer as a band, that’s why we chose those two. We also chose to bring Graveworm with us, the support band, because they are the band that supported us back in those days too, 15 years ago.

And they’re supporting all of the shows on the tour?
Yeah, they are. We asked them to do it and they were very happy about it. We’re having such a good time with those guys. It kinda makes us feel like back in the day. It’s also cool for the younger generation of fans that we have, that they can experience the older stuff. Because the more albums we have, the less we have a chance to play the older stuff cause there’s not enough time in a one hour and half setlist. Now we have the chance to do that. It’s probably gonna be a one time thing and we wanna make it very special. It’s cool that so many people came supporting us so far.

Kataklysm has brought out their own beer a while back.
Yes! It’s called the St. Tabernak, which is a swear word for us in the French region of Canada. We thought it would be cool to have a beer called like that.

We have actually reviewed the beer on our website for the “Pick Your Poison” column (for the article go here).
I hope you liked it! We tried so many different types, the company came with samples and we worked with them to develop something we would like and hopefully other people would too. I think it’s a really good beer, it’s from here! From Belgium (brewery Eutropius, FYI), we’re big fans of Belgian beer.

That was gonna be my next question!
We started talking to the company and they were all over it. The guy was a fan of the band, so he was happy to release a Kataklysm beer. Having our own beer, it’s crazy to me, something I never thought possible. Especially playing the kinda music we do. It’s cool, I showed it to my family and my parents in Canada.

Is it available in Canada?
Yes, it is. But it’s import. So people have to pay a lot of money to get it. It’s more something that you won’t drink a lot because it’s expensive compared to the local stuff. We’re still selling them a little bit everywhere but it’s easier to find here in europe, cause it’s closer to the brewery.

Will you be releasing more beers in the future?
Well let’s see! This one seems to be doing good. It’s not really our decision in the end of the day, it’s gotta make sense for the beer company too. But why not!

Let’s go back to the band itself. You must have a very strong connection to the rest of the band. But what is it exactly that has kept Kataklysm together for 25 years now?
We started this band in high school, like anyone else who would start a band in high school. We were friends at first and we just got into this music thing. I think when you spend so many years together, it almost becomes your second family. I see them more than I see my real family because we’re always touring and always working on stuff. We’re all like brothers, we have fun like brothers and we also fight like brothers. But it’s a good thing, it’s healthy. After all these years we still have that bond. Once we finish the tour, we go home and do different things. But in the end we’re all looking forward to come together and do this again, to see each other again. When you live in close quarters for so long, even with some of your best friends, of course there’s gonna be tensions at some point. But with us it’s all in a healthy way. We all love each other and I hope everybody wants to keep doing this. I’m ready to go on for a while, we’ll see what happens.

Do you have a specific message for the Belgian fans?
We always love being here, in Belgium. We feel very connected because our bass player’s parents are from Brussels. Steph was born in Canada but his whole family is from here. At the same time we love it here because people are crazy and the beer is good. I’m always exited to be here. Finally I wanna say a big thank you to everyone following us over the years, and thank you for the new fans that are just joining the family.

Thanks for the talk!