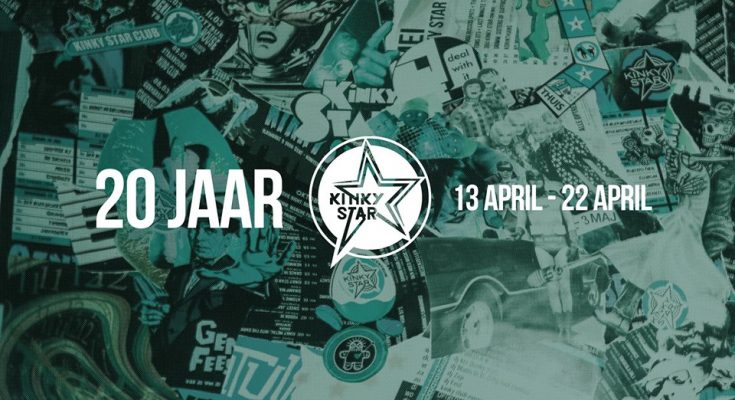 Tomorrow it starts: 10 days of celebration of everything you (don’t) remember about 20 years of Kinky Star in Gent!

To celebrate their 20 year anniversary music center Kinky Star is bringing the formula of Gentse Feesten back several months early: from Thursday April 13th ’till Saturday April 22nd they’re having 10 days of 3 concerts every night! The program is basically an overview of everything that has taken up a spot on their stage the past twenty years.

Kinky Star grew to be a youth and music center that is famous far outside Belgium’s borders. The stage might be rather on the small size, but taking up post there is considered a rite of passage for many starting bands. Evil Superstars, Das Pop, Gorki, Kapitan Korsakov, Black Box Revelation and SX are just a few names of the many now famous bands that passed through Kinky Star once or twice throughout the years. Yearly you can find over three hundred well-known and lesser-known names from various alternative and underground genres on the bill.

Besides the concerts, Kinky Star also puts their chips in supporting artists and young musicians with projects like K met de Kunst van Kinky and JonGeduld, which have been bearing fruits already with successful projects like Uberdope, Coely and Compact Disk Dummies.

Kinky Star consciously chooses to keep their concerts free of entrance to make it possible for musicians and music lovers to meet each other on same grounds more easily. Thanks to the over a hundred volunteers who put their shoulders under every concert following the D.I.Y. philosophy, the club has been able to keep afloat in the rather stormy music landscapes.

Go and refresh your memory of what you experienced at Kinky Star and make some new with your favorite band of yesterday and your new musical heroes of tomorrow, from Thursday April 13th ’till Saturday April 22nd 2017! The schedule shows a highly interesting array of artists and genres, including a Consouling Records and one GRIMM Gent themed day we have been allowed to fill in with some “killer” metal bands: