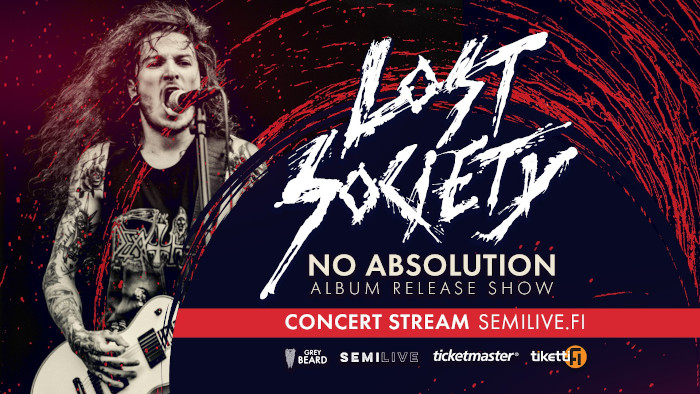 One of Finland’s most popular new bands is most definitely Lost Society. When the band surfaced, their feverish thrash metal caused a revival of the genre in their country and their popularity has been on a rise ever since. With their latest release ‘No Absolution’ they veered away somewhat of that old school thrash sound to bring in more melody and groove, but in doing so they created a pretty impressive album that’ll turn quite some heads all over the world (for our review go here). They’ve been craving to play their new stuff live and due to the COVID-19 crisis, the only way they could do this is through a live stream album release show. Something we couldn’t miss out on… so we moved some of our furniture to the side, getting ready to get wild and mosh in the living room!

After a brief introduction, the view entered a big room, gliding towards where the band was set up. After the intro ran its course, the guys of Lost Society (****) didn’t let things go cold and immediately kicked off with ‘Nonbeliever‘, which happens to be the first track of their latest release ‘No Absolution‘ as well. This live stream concert has one and only one purpose: to play all their new music live for the first time. And that’s exactly what we got.

Surrounded by light coming from the floor and walls, from the side, front and back (and several camera men), they cranked out one track after the other from the album: ‘My Prophecy‘, ‘Deliver Me‘, ‘Blood On Your Hands‘, the latter being the perfect hard hitter to shortly look back in time a bit with ‘I Am The Antidote’ from their highly popular earlier release ‘Braindead‘. Throughout the show, Samy regularly expressed his gratitude for everyone around the world who joined in to celebrate their latest album. And during this second stream, the counter went well over 1200 viewers, definitely not too shabby.

Despite not being able to taste or feel the sweat, music and energy for real, getting to see tracks like ‘Artificial‘, ‘Worthless‘ and ‘Outbreak (No Rest For The Sickest)‘ being played live was a blast. I can imagine with some of these tracks, people actually threw their furniture aside and started a moshpit in their living room. I was definitely banging my head myself. For the last couple of tracks, we got the very different ‘Into Eternity’ (with Apocalyptica on the backtrack), another destructive ‘Braindead‘ track with ‘Riot‘ and last but not least the title track ‘No Absolution‘.

As to be expected, this was a blast of energy from a band that always seems like they have a bottomless pit to delve from. Hairs flew, guitar solos shredded, riffs grooved, Samy shrieked and shouted in the mic and people around the world had a good old metal party. These 2 live streams were also the first gigs having Taz Fagerström (ex-Santa Cruz) behind the skins after Ossi stepped down. Looked right and seems promising for when we can actually see them on a stage for real again!

For those who missed out on this concert and still want to see it for themselves, you can still get tickets at Semilive!

Setlist:
Nonbeliever
My Prophecy
Deliver Me
Blood On Your Hands
I Am The Antidote
Mark Upon Your Skin
Pray For Death
Artificial
Worthless
Outbreak (No Rest For The Sickest)
Into Eternity
Riot
No Absolution 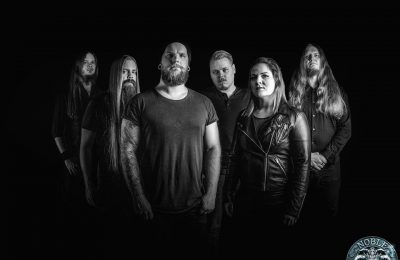 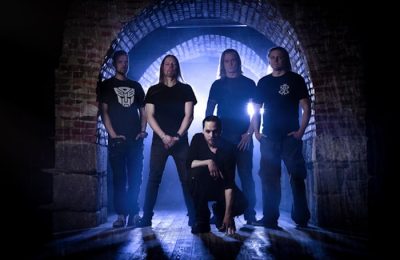