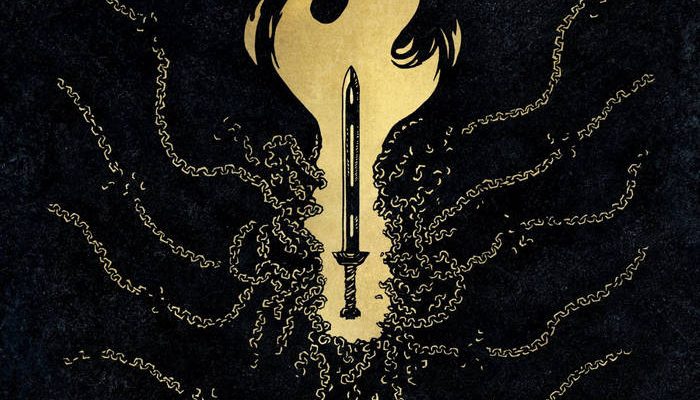 Many bands have taken Norse mythology, sagas and literature as a theme to refer to the ancient civilization of Scandinavia. Through this significant era of history many heroic tales, myths and beliefs created a timeline frame of the ancient realm. Nawaharjan on their debut album Lokabrenna binds their thematic contents on Norse mythology by presenting nine cuts based on imaginary texts known as the Gospel of Loki. Which is the name of the star known in the Scandinavian countries as Dog Star or The Burning Loki.

Nawaharjan‘s brightest work to date spiritually and musically connects with other Norse mythology deities. The German black metal outfit shows remarkable talent, in fact, the debut is their most accomplished work since the 2011 EP Into the Void. After almost a decade of creative process, they have developed their skills. Lokabrenna is built on obscure and raw elements of black metal. Eminently, Nawaharjan‘s musical standards reflect the style of German black metal. The band narrates nine epic journeys through the realm of myths and darkness, with a skilled line-up that includes musicians Skandaz (vocals, guitars), Wodanaridan (bass guitar), Nawabrandaz (drums), and Skadulikam (guitars).

Lokabrenna is inspired by ancient Germanic Heathenism and the anti-cosmic Thursatru philosophy, giving the band a very dark sound, to delving into the ancient world of Norse mythology. Album opener Warassuz is has several changes in tempos where the melodic and atmospheric riffs are perfectly combined. Overshadowed atmosphere dominated by passionate riffs is applied across the nine songs. What is so fascinating about the album is the appealing tone of the vocals that sound quite grim and aghast. Sparking flames and mesmerizing melodies are brilliantly crafted, the captivating performance continues on the second track, Maino.

Nawaharjan transforms the tempo into a mesmerizing rhythm with a rawness of the guitar riffs and dynamic percussion. The guitar melodies flow like glowing tides of lava. The focus on droning black metal riffs and demonic rasps of vocalist/guitarist Skandaz are very effective. The eerie atmosphere and melodies are combined to create a bewitching feel. Mysterious soundscapes resonate powerfully with the heavy blast of the drums, the riffs contribute by adding lethal hooks.

Barbed guitar riffs and scratching tremolos are utilized to perfect the hooks, one of the dominating features is the perfect integration of melancholic soundscapes. Songs like Ūtforskō open with somber guitar and emphasizes further on slow guitar plodding. Drummer Nawabrandaz always provides heavy strikes and powerful dynamics, where the tremolos juxtapose with the pounding drums.

On other tracks such as Sunjo, the guitars bring a raw impact through the riffs with a fine display of compacted atmosphere, carefully fixated at mid-tempo. Umbibrautiniz is another epic track build on the augmenting aura of droning riffs while the intensity of the spectral vocals and dynamic drums swells. The mid-tempo part contains many memorable moments, harsh soundscapes of cawing crows segues into the raw quality of extreme intensity. Thrawo continues in the same blistering pace of drums and brazen riffs which shows the level of expertise. Nawaharjan‘s enthusiasm and sentimental approach captures the ambient and bleak atmosphere of black metal. Album closer Hradjungo maintains the powerful effect of the drums and the passionate flame of the tremolo-picked riffs.

Nawaharjan‘s debut album Lokabrenna is crafted with a dark atmosphere that reminisces the modern style of the German black metal. Recommended for fans of Geïst, Dark Fortress and Der Weg Einer Freiheit.