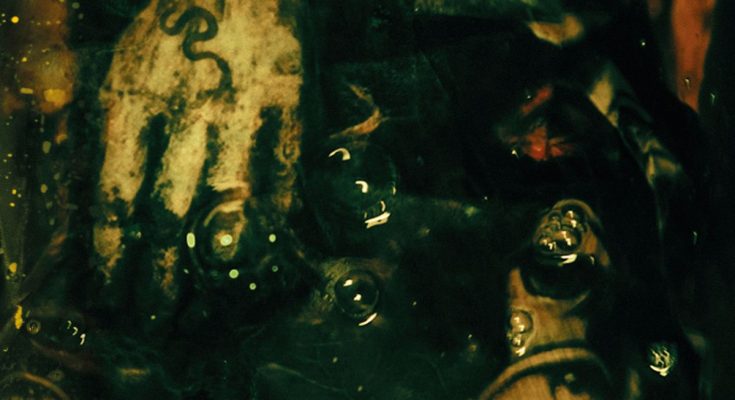 Normally we would have seen the grand unveiling of Oranssi Pazuzu’s latest masterpiece at the orange demon’s home away from home, the annual Roadburn Festival in Tilburg. For reasons we are all too familiar with now, this has been postponed until next spring, so we’ll need to experience their fifth album in a slightly more conventional way.
Hold that thought. “Conventional” should be just about the last word that comes to mind with these Finnish freaks.

Since 2007 they have done their utmost to scale the mountains of madness and pull back the veil of reality through an unlikely amalgamation of black metal and psychedelics. On paper this hybrid does not only sound unlikely , but veritably nigh impossible. Yet these Fins have pulled it off, time and time again for the fifth time now. Their last great exploit was a studio re-enactment of the Wasted Space Orchestra, a one off collaboration with the equally deranged Dark Buddha Rising.

Where to go from there? Especially, since they have in the meantime moved to Nuclear Blast and thus have the opportunity to unleash their mind-altering sonic madness to a larger audience than ever before. ‘Syntheosis’ was the epitome, the omega of what you could attain in such a daring artistic endeavour. Therefore ‘Mestarin kynsi’ had to follow another trajectory across its inner universe.

It translates as ‘the master’s claw’ and is constructed as a concept album of sorts about a dystopian future where the masses are governed through the occult mind control devices of the Master. The songs usually start out quite calm, building slowly on just a few elements. The opening song ‘Ilmestys’ (‘Revelation’) is a prime example of this. An exotic-sounding melody repeats itself like a mantra while NIN-style bleeps and synths crawl in when out of a dark corner a rasping, guttural voice starts spewing all sorts of filth at you. Halfway across the song a single hypnotic riff incites the song to swell up, its individual parts screaming and screeching for attention until it reaches its zenith and implodes under the gravity of its own mass.

The second track takes it down again with an ambient first phase that extends quite far before it allows the madness to be unleashed again unto a realm where the instruments seem to phase in and out of reality, becoming audible only in shards and snippets as they move through our plane of existence. ‘Uusi teknokratia’ is the center stage of this prohetic journey through innerspace. Nervous rythms, finding themselves in uncharted territory, go rampant in an unhinged, loud free jazz exercise that slowly, near the point of exhaustion, bleeds out towards the end.

‘Oikeamielisten sali’, or the hall of the righteous, sets a melancholic tone through synthetic strings spiralling further and further out of orbit toward a psychedelic black prog hole. ‘Kuulen ääniä maan alta’ takes on an industrial aspect where the futuristic concept of the record becomes the most apparent as it gets an almost ‘Perturbator’ style sytnhwave vibe in the second half. ‘Taivaan portti’ opens or closes the gate to heaven in a blast beat barrage of razor sharp riffs and ghostly white noise. Is this our future?