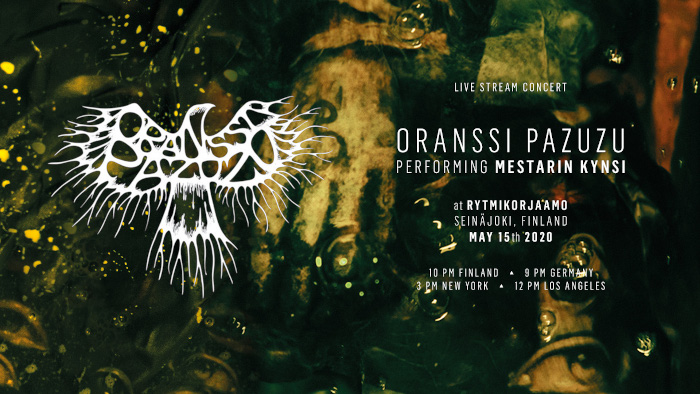 Ever since I discovered the eclectic and psychedelic black metal outfit Oranssi Pazuzu (*****), I’ve been amazed by their body of work. Their sound and artistic vision is truly one of the most original ones that are around and they never seem to compromise on any level. Their most recent release ‘Mestarin kynsi’ will most likely end up in my AOTY shortlist and is simply amazing again, bending the rules of extreme metal music into unheard soundscapes (for our album review go here). So when it was announced that due to this crisis they were going to play the album from start to finish in a live stream concert, I immediately marked it in fat letters in my calendar.

It was hard to guess what to expect from these guys’ version of a live stream concert, since they always seem to do things slightly different. The mood was already set perfectly with a “coming soon” and “oranssi pazuzu performs mestarin kynsi” on a black background and ominous spacey sounds while you waited for them to start if you arrived early. Once they finally started, I immediately knew that this was going to be different from any of the live streams I’d seen before. During the first track, they were playing surrounded by pure white and we got to see camera angles that were different and a clear artistic approach from their side.

At several times throughout the performance I almost wondered if this was actually live, the quality and overall production was that good. With those special angles, weird zooms, eclectic lights (going from full-on white, to sparsely lit surrounded by darkness for the rest to deep blue or red at times) and video overlays, they created the perfect setting and atmosphere for their psychedelic extreme music. And that music was played to perfection as well. The growls and shrieks were haunting and bone-chilling, the conglomeration of icy riffs, off-beat drums, weird spacey samples and even live trombone brought their epic and majestic sound into our living rooms all over the world in all its glory.

Oranssi Pazuzu‘s live stream of them performing their latest album in full was absolutely mind-blowing. It was so good that it made me forget the world around me for a short while and even the fact that we can’t go see bands live for real for now. Afterwards it also kind of made me a bit sad because it re-awakened my concert fever. I can’t wait to be able to see these guys on stage in real life now!